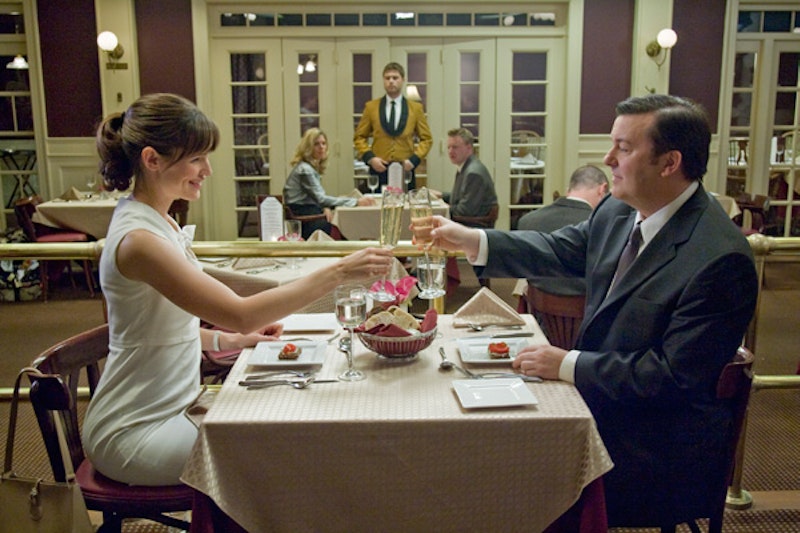 The Invention of Lying, a kind of inverse Liar Liar in which Ricky Gervais' character is the only member of society able to comprehend untruthfulness, manages to be both high-concept and low-concept at the same time. The movie is painstakingly built on a single premise, yet doesn't play by the rules it invents. Gervais, who also co-wrote and co-directed, posits, for instance, that despite the inability to lie, people still talk as much as they do in real life—they just say exactly what's on their mind, at all times, rather than indulging the little fibs that all of us commit routinely. But this setup makes ones of his best jokes, a fake advertisement for Coke, ring false; would this society even have advertising in the first place? Gervais' comedy is based on easy cracks about pop culture and obnoxious strangers, but he ultimately lacks the creative courage to reimagine how his premise would affect how people act.

Littered with logical holes, built on a foundation of cheap laughs, and padded with clunky montages, The Invention of Lying only occasionally exhibits anything close to the profundity of Groundhog Day, its most obvious influence. That movie took a slight premise and expanded it into both a satisfying, classicist romantic comedy and a legitimately thought-provoking metaphysical statement. Lying's premise is gigantic, and there's barely a plot or performance to keep it from deflating.

Since he is the conceptual godfather of The Office (and thus the de facto shaman figure among current mainstream American comedy) and a relative newcomer to American mainstream comedy itself, Gervais has managed to attain an odd, privileged status: combination elder-statesmen and hip new kid. Thus we're subjected to the endless series of cameos from not only the inspired-by-Gervais faction (Tina Fey and Jason Bateman of 30 Rock and Arrested Development, respectively), but also the Gervais-stole-my-ideas camp (Christopher Guest and Jeffrey Tambor, whose character Hank Kingsley from The Larry Sanders Show is the obvious progenitor of Gervais' trademark sensitive/offensive bumbler role), and the equally-derivative-of-Shandling group (Jonah Hill and Martin Starr's suicidal slackers are direct lifts from any Apatow script). This display is more egregious and self-serving than even the concurrent scene in Apatow's Funny People, because Gervais builds his entire script around this easy audience recognition.

The two movies are unavoidably comparable, seeing as they both represent the inevitable self-importance phase of two comedians whose good press exceeds their apparent creativity. At least Apatow has the ungraceful honesty to just write plainly self-absorbed personal projects; Gervais can't stop himself from going totally maudlin, giving himself no fewer than three tearful monologues in between occasional bits of genuine comedy and insight. Apatow's humor has devolved into a jumble of easily marketable ticks, but at least they're his ticks. Gervais can't tell a joke if there's an easier, broader one he might tell instead. He resorts to insults, his stock-in-trade and main influence on contemporary American comedy, whenever possible, perhaps thinking that by directing his barbs toward himself he might make them seem less smug.

But The Invention of Lying is so blandly "edgy," so safely cynical, that it eventually becomes hard to care about its implications at all. Gervais and co-writer Matthew Robinson contend, unoriginally but still playfully, that the "lies" of religion were invented to help us cope with the knowledge of death. But this is silly; were religion merely the result of liars fooling rubes, it wouldn't be the force it is. Gervais and Robinson's conception of religion doesn't allow for the existence of belief, only hucksterism. And their thoughts on love and kindness only extend as far as necessary for a requisite romantic comedy ending.

There are redeeming qualities, like Jennifer Garner's great, surprisingly emotive performance as Gervais' love interest. As she did in Juno, Garner injects an almost unnecessary amount of actorly dignity into this film, and her unself-conscious performance is the only breath of life in a film that's otherwise outfitted with more cameos than actual roles. There's also one astounding shot, after Gervais' character writes and recites the society's first-ever non-historically-factual screenplay; the camera then turns and does a slow pan of the officeful of duly astounded reactions. It's one of the best laughs in the film, as well as a lonely moment of real cinematic achievement.

Mainly, though, this is a shallow vanity project for Gervais, and that solipsism is the ultimate similarity between him and Apatow, and the thing that separates them from influences like Garry Shandling, Second City, and National Lampoon. The self-pitying cracks about fatness and ugliness come to feel almost embarrassing, like Gervais has let success and adolescent revenge overshadow the task of simply making people laugh. The same impulse informs all the celebrities, comedic and not, that appear for a few lines, as if to kiss the ring of their new genre Godfather. It's enough to make me yearn for the purer days of Caddyshack and Ghostbusters, when the nerds just wanted to get laid, not celebrate themselves.

The Invention of Lying, directed by Ricky Gervais and Matthew Robinson. Warner Brothers Pictures, 100 min., rated PG-13. Starts tomorrow, but I beg of you: see Extract instead.