My One and Only makes nostalgia and coming-of-age look laborious, while Mike Judge's phenomenal Extract only looks simplistic. (Grades: B-/A) 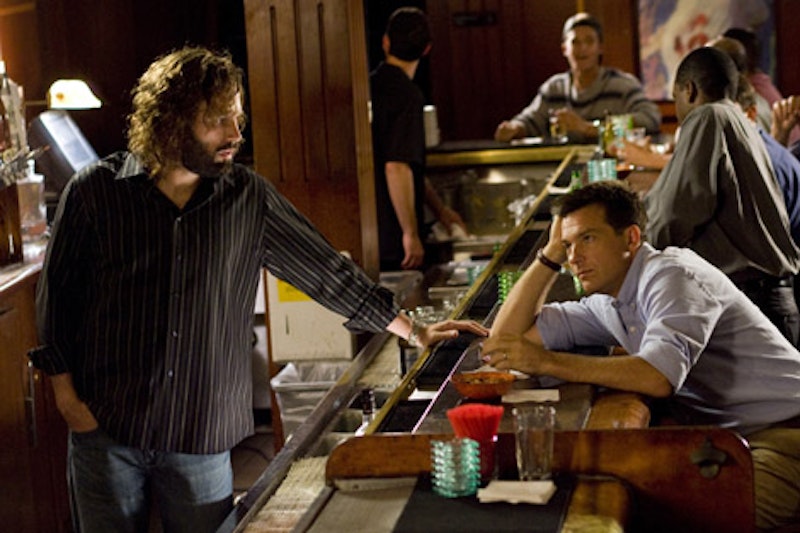 In what appears to be an end-of-summer housecleaning by their respective studios, both Richard Loncraine's loose George Hamilton biopic My One and Only and Mike Judge's workplace comedy Extract have been rather unceremoniously sprinkled into theaters between the summer box-office rush and the coming autumn Oscar race. Both films are directed by successful, if not particularly bankable, filmmakers (Loncraine last made the leaden Harrison Ford vehicle Firewall and the agreeable romantic comedy Wimbledon before that; Judge's Office Space failed miserably in theaters before reaching a deservingly massive audience on DVD) and feature casts of mainly television actors. Of the two, it seems My One and Only got the worse deal, as its more-or-less biographical underpinnings and self-consciously showy lead performance by Renee Zellweger seem like the lesser makings of Oscar season. Extract's quiet opening, however, is just more proof that Hollywood doesn't know what do to with Judge; his last film, Idiocracy, was barely released, and now this one is getting tacked on at end of the summer rather than marketed to compete with the season's big comedies. It's a shame, and a waste—Extract is funnier, smarter, better made, and arguably more widely appealing than The Hangover or Brüno, and it's one of the best movies I've seen all year. No doubt it'll kill on DVD.

My One and Only, however, is the non-musical cousin to this year's earlier Easy Virtue: everything about this film is overdone, such that it mars the smaller pleasures to be had along the way. A cheerful road movie set in 1953 about George Devereaux (Logan Lerman) and the prickly relationships he has with his swing-era bandleader dad (Kevin Bacon) and reckless husband-hunting mother (Zellweger), it abounds with characters who speak almost entirely in unrealistic quips and houses them within a glossy production style that feels too pert, too clean, for any of its eventual melodrama to register. The paternal Devereaux is a philanderer and bad husband, so Zellweger's over-the-hill Southern belle takes her boys (George and his half-brother Robbie, who's a walking collection of hackneyed gay tropes) on the road, looking for a new paterfamilias. A couple hammy cameos follow, some good (Steven Weber as a drunken, pathetic Boston businessman), some silly (like David Koechner doing his schtick as an awkward rural paint salesman), but most simply clichéd beyond all reason: Chris Noth plays a clownishly hard-as-nails military man, and Nick Stahl plays a proto-James Dean type who has at least one ludicrous monologue about how the curves of a Cadillac are like those of a beautiful woman.

This all somehow leads leisurely to George's eventual arrival in Hollywood, though if you've never heard of George Hamilton (who also executive produced the film), then you're unlikely to care about his climactic reading on the set of Lone Star, and the movie, despite a believable and emotive performance by Lerman, doesn't offer much to care about besides its being the story of a future star. New characters literally walk onscreen within seconds of the previous ones' exits, and this manic energy, rather than achieving the inspired lunacy of Preston Sturges' traveling films like The Palm Beach Story, is simply draining.

The brilliance of Mike Judge's films, excepting perhaps Idiocracy, is in how literally effortless they feel. Which isn't always a good thing; there are moments in Extract when the movie feels almost too low-key, and generally Judge doesn't seem to have much cinema-specific ambition to him. But he certainly has a style, which is nearly the same thing. The increasingly ubiquitous Jason Bateman plays Joel Reynold, the owner of a flavor extract company who's adrift in a sexless marriage and doesn't have any friends besides his old bartending buddy Dean (Ben Affleck), who still gives him free drinks at his Holiday Inn sports bar. When a flirty, sexpot temp employee (Mila Kunis) enters the factory, Joel eventually agrees to Dean's plan: he'll hire a male prostitute, Brad (Dustin Milligan) to seduce his wife during the workday so he can commence an affair without guilt.

This only hints at where Extract goes plot-wise, and to be fair, plot really isn't the point here. (Judge's apparent disinterest in taut storytelling is another one of his seemingly uncinematic qualities, though again, his movies have their own irrefutable internal logic.) Instead, the film is a collection of characters and unhurried set pieces, nearly all of which hedge close to cliché but never quite get there thanks to incredible performances. Kristen Wiig plays Joel's wife, a role that, like Milligan's beefcake bimbo, invites overacting and broad caricature that the actors never deliver. Instead—and this is where Judge's terminal low-keyness pays off—all these characters work precisely because they underperform; some of the funniest moments are in people's silent miscommunications or frustrations, which makes Extract feel understated and thoughtful even though key sequences involve a massive bong and the violent destruction of a character's testicles.

This is Judge's gift. His story ambles along and his humor consistently returns to lowbrow standbys, but in Joel's saga we see a filmic version of professional life that feels real and complex. Every character, no matter how small (and like the greatest comic filmmakers, Judge knows how to assemble a large cast), feels like an actual person, with a life outside their scenes. This is perhaps why Judge's best movies have been set in workplaces, where people act out roles that often feel oppressive to their natural characters. It could be said that Judge spends too much time laughing at Red State stereotypes, which might be true if his observations about the minutiae of contemporary American life weren't so dead-on and widely deployed. When brand names appear, we never get the feeling that he's shoe-horning product placement into his scripts, because nobody ever gets excited about any particular product in his movies, they just accept them as an unavoidable part of life.

Joel, for instance, dreams of a potential buyout from General Mills because it would allow him to retire; Extract's everyman hero, like all Judge's similar characters, merely wants to be left alone. This is a distinctly American desire, which undercuts any easy cynicism in the film. The genitally injured employee, Step (Clifton Collins, Jr.), ultimately finds solace by returning to work rather than suing his employer for extra insurance money, and Joel himself learns to appreciate the fact that he has a company to manage, rather than resenting his workaday responsibilities and his employees' petty squabbles. I'm trying hard to not to oversell Extract, since its charms are subtle ones and the film benefits from the slyly unpretentious way that Judge reveals its themes. But in its depiction of a company manager whose life gets momentarily away from him, Extract does indeed capture something about the way we all attempt to manage our own lives amid the constant influence of coworkers, friends, relatives, and consumer culture. It's as if Mike Judge has made a profound, intelligent film about our contemporary values almost in spite of himself, and the movie is so enjoyable for exactly that reason.

My One and Only, directed by Richard Loncraine. Freestyle Releasing, rated PG-13, 108 min. Now playing at Landmark Harbor East.