Why we need WR: Mysteries of the Organism now more than ever. 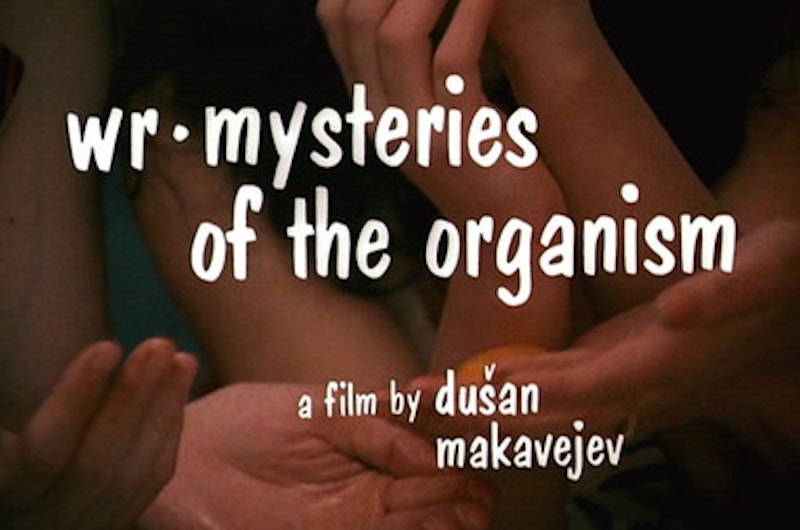 Any cultural artifact that builds its initial reputation on the strength of being “shocking” has an uphill battle for continued relevance, but Dušan Makavejev's 1971 film WR: Mysteries of the Organism—which was banned and boycotted in many countries for purported obscenity and pornography—retains a strange ability to shock long after its offensiveness has waned. We can't still possibly call this movie offensive when more over-sexed, truly pornographic material appears regularly in online banner ads, but Makavejev’s relentless kaleidoscope of images is so far from contemporary western society’s typical approach to sex that it remains as disorienting as audiences apparently found it in the early 70s. Frankness is one thing, although WR has that too. More so, however, it's shocking to see sex filmed and performed with this much joy.

The “WR” of the title is Wilhelm Reich, the German (and later naturalized American) psychologist who believed that the orgasm, with its simultaneous psychological and physical intensity, was the key to individual and political freedom. Makavejev's film is ostensibly a documentary about Reich's theories and life, but that mission is dispensed with early on, replaced by a mixture of archival, documentary, and original narrative footage. Reich's message gets so lost in the movie’s bizarre logic that many of his followers see WR as an 80-minute character assassination. I recently saw WR at the 2008 Maryland Film Festival, where the subsequent Q&A session ended with a firm yet understated claim by a professed Reich student: “Some of us have a very hard time with this film.”

I can sympathize, since the main character in the fictional portion is Milena, a young Yugoslavian woman and avid Reichian whose eventual decapitation is played for laughs. But it's still hard to understand how anyone could feel personally singled out for ridicule by a movie this democratic in its satire. The famous transgender film star Jackie Curtis has a few earnest monologues about her sexual experiences and philosophies, but then footage of her walking in Manhattan is set to commercial jingles and aligned with the propagandistic songs in Soviet movies. When compared to the Yugoslavia-set narrative and its characters’ belief in sex as a small opportunity for freedom under Stalinism, the American’s experiments seem frivolous and commercial.

WR is less a straight biography or documentary on Reich than one man’s individual reflection on the issues that Reich raised. It’s as if Makavejev took the big words from the cover summary of a Reich book—“Sex,” “Revolution,” “Freedom,” “Orgasm”—and then attempted a psychedelic variation on those themes. The Maryland Film Festival screening was introduced by documentarian Alex Gibney, who rightly referred to WR as a personal essay rather than a straight documentary. It's impossible to imagine this film being made by any other person.

Makavejev’s historical context is also essential to understanding the movie, however; WR is at times an almost cartoonish specimen of the psychedelic era, perhaps one use of the Youngbloods’ “Get Together” away from outright parody. It is a hodgepodge of split-screen visuals, freewheeling plotlessness, and political unrest, complete with appearances from a member of the Fugs and the editorial staff of Screw magazine. This is a movie that's truly inseparable from the zeitgeist that birthed it, and given the subject matter at hand, the concept of “free love” and its various iterations understandably get a lot of screen time.

For those of us born into a post-AIDS sexual culture, however, who were early into puberty around the time that executive semen stains on a blue dress became primetime network news, this concept couldn’t seem more dated or silly. We see the naked swimmers in Woodstock and think of them as simultaneously quaint and misguided, unaware that their individual revolutions of drugs, music, and sex would fail to coalesce into anything as meaningful as they expected. Within three years of Woodstock, Hunter Thompson offered what is still the most famous eulogy for the idealism of that time:

There was no point in fighting—on our side or theirs. We had all the momentum; we were riding on the crest of a high and beautiful wave…
So now, less than five years later, you can go up on a steep hill in Las Vegas and look West, and with the right kind of eyes you can almost see the high-water mark—that place where the wave finally broke and rolled back.

Around the time that the president's ejaculations became dinnertime conversation fodder, a world of hardcore pornography opened up to anyone with an Internet connection. For our grandparents, sex in pop culture existed only implicitly; it was Rhett Butler telling Scarlett O’Hara, “You need to be kissed, and often, by someone who knows how,” and then the cut to Scarlett's obviously post-coital face in bed. For our parents, it was Marilyn Monroe and the hazy spreads of Playboy in its infancy. But for anyone who came of age in the 1990s, computers assured that “sex in pop culture” amounted to whatever your depraved, hormone-addled pubescent mind could invent as a Yahoo search. It was Loveline with Adam Carolla and Dr. Drew, or Dan Savage’s syndicated advice column and its increasingly vulgar imitators. The Internet decreed that no fetish or fantasy went un-photographed and no incident of cinematic female nudity went un-catalogued.

WR: Mysteries of the Organism therefore remains shocking nearly 40 years on, even to this jaded 23-year-old. Not simply because there were a lot of genitals onscreen, but because of the experimentalism and joy that the documentary and fictional subjects display. The Yugoslavian couple whose marathon sex takes place in every room of their apartment wear smiles of astonishment, even revelry. More importantly, they look like equals; though they just met, theirs is an actual coupling, not just a fluid exchange and male fantasy enactment. The editorial staff at Screw, many of them fully nude, seem wide-eyed and open minded—just look at the editor's smile, not for a minute predatory, as he gets his penis plaster casted. (Screw’s own 1968 mission statement even ended with the declaration “SEX IS FUN.”)

The movie itself, with its hectic mixture of forms and Makavejev’s refusal to take any one of them seriously, is silly and absurd to the point of childishness. It is obscene, but somehow wholesome, its indecency balanced by giddiness and humor. WR is by no means a faithful or detailed explanation of Wilhelm Reich’s teachings, but it is true to his message of sex as a liberating, personally revolutionary practice. By using the subject of sex, Dušan Makavejev created a film that feels intensely personal and freed from any and all outside constraints.

There are moments of discomfort, sadness, and terror in WR, such as the archival footage of an early-20th century shock treatment, but as a whole it is an astonishingly joyful movie. It may have upset the moral watchdogs of its time (as it would today), but society has evolved and turned it into something unique and necessary for us now, when the dangers of STDs and the self-seriousness of pornography have infiltrated and forever altered the collective sexual consciousness. Filmed between 1968 and 1971, the movie captures a moment between the cresting of Thompson’s wave and his eventual funeral for it. And because of Makavejev's light mocking tone and avoidance of cliché soundtracks—no Doors? No Jefferson Airplane? No Steppenwolf?—it somehow manages to not seem as naïve a time capsule as the Woodstock bathers. WR is overwhelmingly a product of the hippie culture, yet it never bows to any of the reductive stereotypes that my generation summons when we think of that time. It shocked me because I didn't think we had any lessons left to learn from that era; yet how beautiful it is to see sex filmed with a sense of discovery and wonder, to be reminded that we are all merely organisms and that there are indeed mysteries yet.

WR: Mysteries of the Organism is available on DVD through the Criterion Collection.