David Mamet bends a B-movie genre to his will, which means giving audiences a martial arts movie with more talking than kicking. 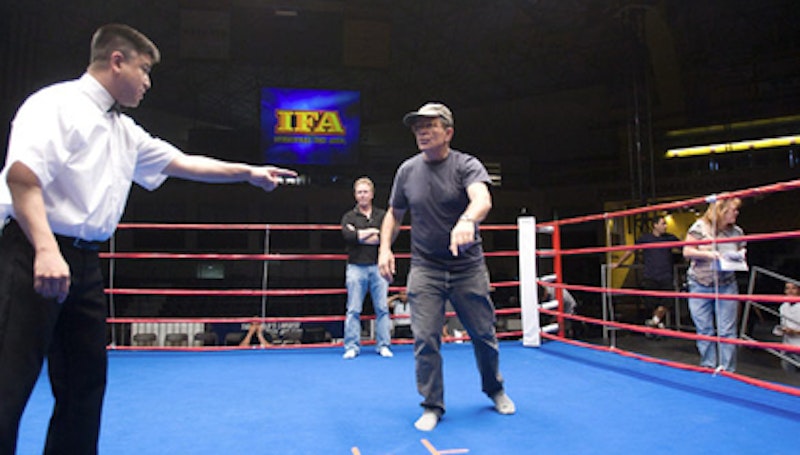 As an example of a highly individual stylist tackling an uncharacteristic genre, Redbelt is fascinating. All the conventions of standard-issue martial arts movies are present (a loner who fights to redeem his honor, plenty of obvious fighting-is-like-life monologues), as are all of Mamet's signatures, barring perhaps his penchant for sharp profanity. The movie is talky as hell, with a plot so dense it feels like a middle finger to journalists whose word counts will be eaten up by even the most cursory description. If any get beyond that, one hopes they'll point out that Mamet's film, while an intriguing stylistic exercise, is a noble failure that further exhibits the disparity between his writing and directorial talents.

Not that Redbelt offers particularly convincing evidence of Mamet's writing chops, either; the plot has as many twists, turns, and back stabbings as House of Games, his directorial debut from 1987, but barely any memorable individual lines. Chiwetel Ijiofor plays Mike Terry, the hard-luck owner and teacher of an L.A. jiu jitsu school. He's got money problems to equal his devoted students, as well as a spicy, no-nonsense Brazilian wife (Alice Braga) for an office manager. Within the first 40 minutes, a frantic woman (Emily Mortimer) shoots out the window of Mike's school with a student's gun; he defends a movie star (Tim Allen) in a bar brawl; he's rewarded for that good deed with a producer's role in a movie; he borrows money from a bookie (a welcome David Paymer); and he unknowingly implicates his prize student, a cop named Officer Joe Ryan, in a web of lies that eventually spoils all his sudden success. All these strands come together eventually, and it is a certain type of weird entertainment to watch Mamet build up such a complicated explanation for why his warrior needs to fight in the first place. You'd think that'd be self-explanatory.

Redbelt is a Swiss watch of tight plotting, a sort of inverse House of Games, in which a simple story about gambling eventually spiraled into a violent web of betrayal. Here, the plot reaches a fever pitch in the first hour before ending in the obligatory last fight for glory. Ijiofor, previously seen as the resistance leader in Children of Men, does great work; his Mike is at once brooding and single-minded, and he's completely physically believable as a martial arts master. Tim Allen goes for a version of Jerry Lewis' turn in The King of Comedy, clearly drawn to an adult role in which he can swear and drink in between Santa Clause sequels, but he's only in the film for about 20 minutes. As if to further the House of Games comparison, Ricky Jay and Joe Mantegna show up in supporting roles that do nothing but service the plot machinations. Mortimer and Braga are good, too, but nobody's character has any room to breathe amidst the action.

Inexplicably, that action doesn't include much fighting. There's a lot of slow, instructive grappling and the occasional sweaty practice match, but Mamet's clearly got his eyes on the metaphorical possibilities of the martial arts mystique. He's written extensively on the soul-crushing evils of Hollywood, so it's no surprise that Mike's brief flirtation with glitz and prestige ends with him getting royally screwed. Indeed, by the end of the film, Mike's been abandoned or tricked by nearly everyone in his life, and his ultimate victory lands him a doting, supportive woman and the titular belt that signifies undisputed champion status. In a way, Redbelt is Mamet's movie about an artist's experience in Hollywood: you work hard, you respect your teachers and your honor, and then people with money and power try to fuck up your entire life. Then it's time to buckle down and kick some ass.

Odd, then, that Mamet's filmmaking launches no real offensive on Hollywood conventions. His writing is almost instantly recognizable (even here, when it's a stilted parody of itself), yet his direction is faceless. No camera movements seem inspired, no cuts feel profound, and there's no visual storytelling to match Mamet's concentration on "what happens next," to borrow his own proclaimed writing obsession. But as a psychological dramatist, his ideas of "action" are bound to character motivations and interactions, which is why all the cranking and grinding of the movie's first half feels so bizarre. We all know it's going to end with a heroic fight; why does Mamet take such a long time getting there? The fight itself is so limp and disorienting that Mamet doesn't even deliver on his genre slumming.

Redbelt is taut but it's not fun, which is a critical failure for an action movie. Mamet's clearly impressed by his own ability to match his moral concerns and artistic trademarks to such B-movie fodder, but he's not a skilled enough filmmaker within this genre to make it work. His movie is all sparring and no showdown.