CSI and the Remorse Close-up 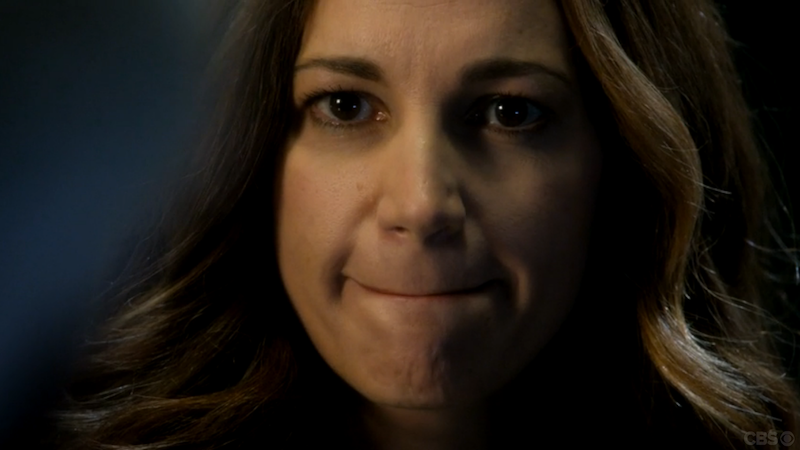 What we notice about CSI is the autopsy stuff, all the purple tubes done up in roller-coaster CGI. What the future will notice is the remorse close-up. It's a tic the show has. The action takes a break for eight or nine seconds, and we watch as a man (usually it's a man) looks straight on and realizes that his choices in life are no good, that he cannot have self-respect. The parking attendant with the feeble mustache bites his lip; the base of his left eyelid quivers, right along the lash; his chin bats toward his armpit because he wants to hide. The detectives are there at the club because of the heiress who died from Rohypnol; all the parking attendant did was sell loose cigarettes. Even so, the regulars take the time to wince over the attendant's moral choices, and Little Mustache crumbles as a result. His face loses its topsoil, and there we are watching.

The remorse close-up is something the camera holds on, like a satisfaction close-up in a beer commercial. But its execution involves a lot more detail. A satisfaction shot has a bottle and a face, and the face is engaged in something practical (gulping). A remorse close-up has just the face, and the face is doing nothing except being itself. That face really has to put out: eyebrow shifts, lip adjustments, ear angles. Acting instruction has gotten better and better over the years—one thing this society can do is teach people to act—and the result is the face dance, the choreographed nostril fidgets that dominate TV drama. The remorse close-up is the face dance at its miniaturized height. The guest actor wrinkles together some equivalent of an origami blossom, a piece of face art that is brief, of course, but elaborately perfect.

As it happens, this display represents the moment when a schmo gets his soul dented. We have a particular taste, as it turns out: the audience likes to see crumple. Law & Order did its share of putting bystanders on the spot; a rich lady's spiritual adviser (with wimpy beard) sagged when he confessed that he did odd jobs around the estate. But it's typical of the CSI programs to compact this sort of business into a killer moment, a standalone that jolts the nervous system no matter what else is going on in the story. After a hundred hours of watching cop shows, I don't think a Law & Order episode ever gave me a flash shot of the inner thigh of the drug lord's model-girlfriend as she got out of a swimming pool. I'm pretty sure that every CSI episode managed to do that or the equivalent (croupier, cleavage). CSI always has some monkey business jumping around the corners of your eyes.

They also have the remorse close-up, something that is not subliminal but feels like it ought to be. It's our chance to lick at a thing we don't admit to wanting. Yet the remorse close-up doesn't have to sneak into the show. The moment of gloat continues for second after second, in plain view. Ostensibly it teaches a moral lesson, since the person has done wrong. Moralizing is fun, but I think the close-up's deeper kick lies in this: the person is being humbled by somebody else, specifically by the actions of the other person's face. First the detective frowns, then the attendant crumbles. That touches us, that sequence works at a level inside our nervous systems.

Has anyone ever talked about it? I read a lot and watch a lot of stand-up, but nothing. Nobody says the remorse close-up is there, nobody says it isn't. Nobody has to explain, “Oh yeah, it's satisfying when you see personality structures come unpinned in a person's expression because we all maintain our personalities through interaction with acquaintances, and most of us worry about our faces coming unstuck and the weakness showing through.” Or whatever theory, because the topic doesn't exist. Apparently, people agree that everybody can take this moment together and then move along.

Life is easier that way. But down the road, when daily life changes and people find other odd contrivances for dealing with its frustrations, they’ll look back at us and think, “What was it with those people and faces?” And then, thoughtfully, “Those were the people who needed the remorse close-up.” Think about it and bite your lip.