New Spike Lee film is baggy and overlong, but it’s a much less sloppy collage than usual. B+ 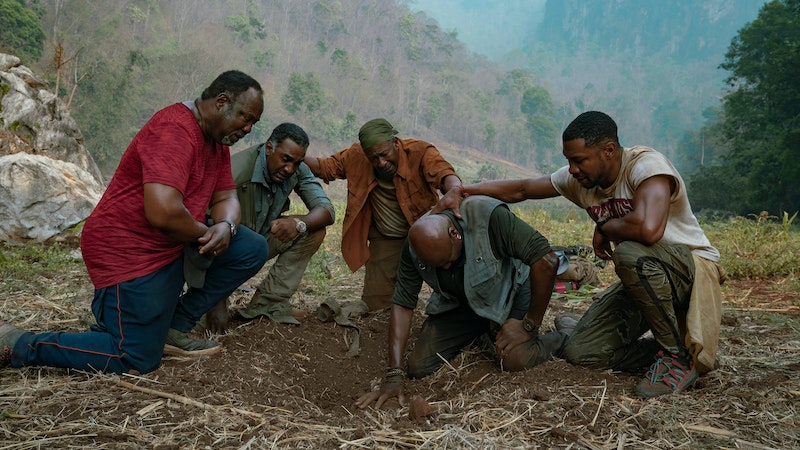 Spike Lee’s new film Da 5 Bloods has been out now on Netflix for a week, and under normal circumstances, more people would be talking about how, finally, we can recognize exceptional “Oscar worthy” performances wherever they’re available, whether it’s in theaters or at home. A frivolous conversation, especially since the Academy changed their rules to allow streaming-only titles to compete in the 2021 Oscars (before they were cancelled). A new Lee movie right now sounds very good: 2018’s BlacKkKlansman was his best in years, and since the murder of George Floyd, his 1989 albatross Do the Right Thing has been invoked every goddamn day by people who don’t know what those words mean or, when questioned, don’t agree with Lee’s soft black supremacy.

I caught part of an NPR interview with Giancarlo Esposito last week, and he told a brief story about Lee cornering him and asking “what side” he was on. “My mother was black, my father was white—and Spike asked me if I’d be with my mother or my father. He called me a ‘Black European.’” This was many years ago, but thankfully, Lee hasn’t softened with age, and his films remain provocative and, unfortunately, uniquely political: Lee’s movies are big baggy works full of clippings and sketches and touches that spit in the face of anyone who complains about being “reminded they’re watching a movie.” Lee rubs reality in the faces of his audiences who either already know about all the injustice, or didn’t and don’t want to know at all.

Da 5 Bloods follows four American Vietnam vets reuniting and taking a trip to bring home the remains of their fallen friend and (hopefully) recover some gold bars they lost nearly 50 years ago. Paul (Delroy Lindo), Otis (Clarke Peters), Melvin (Isiah Whitlock Jr.), and Eddie (Norm Lewis) are looking for “Stormin’ Norman” (Chadwick Boseman, in flashbacks). They arrive in Ho Chi Minh City calm as cucumbers, excited to see each other for the first time in years and eager to have something resembling a vacation. The first hour or so of Da 5 Bloods is leisurely, spending time with these characters and moving back and forth occasionally between the present day (shown in 2:35 aspect ratio) to the war (shown in 1:33).

We learn little about Stormin’ Norman beyond the gold-tinted version of history, where Boseman is young and everyone else is inexplicably old. I don’t mind this, and it’s certainly not as egregious as The Irishman, where we had to watch a Social Security DeNiro limp around acting like he’s in his early-30s. Ironically, in a war movie, things are so chaotic and insane that we don’t see much of the surviving Bloods moving around, and when we do see them in those grainy square memories, we recognize that they’re memories, and Lee’s decision not to hide the actors’ age at all reinforces the reality that these are daydreams, this is not what happened necessarily.

Da 5 Bloods is a notably gory film, as any about war should be. From the first minutes, we learn that this archival footage will not be airbrushed or cut short for explicit content: we don’t just see Eddie Adams’ Pulitzer Prize winning photograph of Nguyễn Văn Lém about to be executed, we see the 8mm footage of his body falling to the ground, with thick spurts of strawberry red blood arching out of a hole in his head like so much melted ice cream. The rest of the film is similarly unsparing in its depiction of disfigurement, again, as any film about war should be. There’s an important distinction between violence and gore. Da 5 Bloods has plenty of shootouts and typical kills on a level you could expect from any action movie.

But when one of the leads steps on a landmine and loses his bottom half? We see him, what’s left of him: a gushing mound. And he’s still alive! I couldn’t take watching Otis cradle Eddie as he growls and moans in total agony, just the most horrible and cruel fate, like the Holocaust survivor that was killed in the synagogue shooting in 2018. As Paul says when he loses his share of the gold, “Life’s a bitch!”

The ensemble cast is a lot of fun to watch, and they carry the 155-minute movie and make it enjoyable rather than the dutiful slog of The Irishman. The Bloods catch up over dinner in Ho Chi Minh City, and it comes out that Paul, wearing a MAGA hat, is going to vote for Trump again. “You’re gonna vote for President Bone Spurs?” one of them says. At first, I couldn’t believe Lee had included such a limp insult against Trump, but then you remember that to these guys, Vietnam vets, the “bone spurs” draft might bother them. But Paul’s all in, insisting “We’ve got to build the wall” and keep “foreigners out.” Paul’s the most traumatized of all the Bloods, and Lindo’s descent through Da 5 Bloods is his best work with Lee.

He’s being compared to Colonel Kurtz and Marlon Brando for obvious reasons, but remember that Brando is only half-illuminated and barely intelligible in those last 20 minutes of Apocalypse Now. Lindo sees Paul through nearly 50 years of American history, and his character, along with the rest of the Bloods, is well drawn—unlike all the non-black characters, who are cardboard cutouts. This is typical for Lee, but exaggerated here, and it’s a nice inversion for a war movie where the good ole white boy drafted at 18 gets blown in half by a VC in the trees with two parallel lines for eyes. The cavalier racism of The Deer Hunter is replicated here.

Mark Kermode in The Guardian wrote, “Warring elements of Da 5 Bloods appear bolted together,” which is true, but much less true than many of Lee’s lesser films. Do the Right Thing is his albatross because people can’t accept the fact that he’s always been a collagist, and some collages are cleaner than others. Compared to a mess like 2004’s She Hate Me, which tries to resolve AIDS, post-9/11 censorship, and black male chauvinism in a court testimony in the last 15 minutes (of a two-and-a-half-hour film), Da 5 Bloods is taut as a suspension bridge. I can’t imagine Kermode, a decent critic, is referring to the film’s frequent use of photographs, archival footage, fourth wall breaking cutaways (like Lindo’s gripping close-up direct address toward the end), or the aspect ratio changes.

The final adventure is shown in 1:85, a compression that calls attention to itself more than achieving any kind of “tunnel vision” effect it was meant to encourage. The third aspect ratio doesn’t make this sequence any more intense, and Lee makes the civilized present day cinematic by showing it in 2:35. Lee tries to make this sequence the most “real” by nearly filling the screen with it, but it’s just another in his litany of truly bolted-on Film School 101 devices and references, even in his best film Bamboozled—there, a totally unnecessary Network homage in the middle of a more biting and relevant critique of mass media; and here, with a relaxing boat ride set to “Ride of the Valkyries.” There’s an Apocalypse Now banner hanging behind the DJ at a club the Bloods go to in the beginning, and sure, the gold is Sierra Madre, but Lee poaches so much less from that movie here than in other “loving homages”