Portrait of a Lady on Fire is a beautiful and lyrical film by Céline Sciamma. A 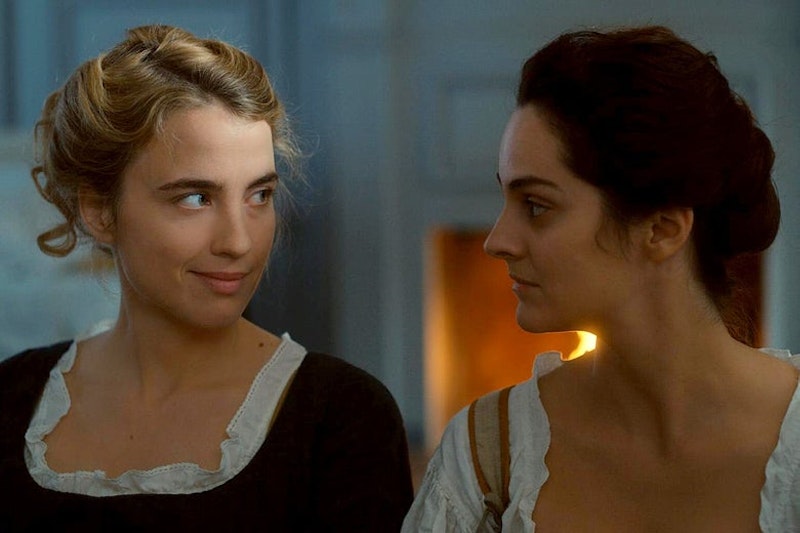 One of the greatest achievements in international cinema in 2019 is finally getting a wide U.S. release this week. Portrait of a Lady on Fire, French director Céline Sciamma's film that debuted at Cannes last spring and drew virtually unanimous positive notices from the fall festival circuit, is a beautiful and lyrical film.

Set in 18th-century France, Portrait of a Lady on Fire—which has nothing to do with Henry James' Portrait of a Lady—is a love story between two women, which features a fair amount of sexuality and nudity. But this isn't a male gaze horndog fantasy in the tradition of that other internationally renowned French lesbian film, 2013's Blue is the Warmest Color. Rather, it's a slow-burn, humane and ultimately tragic telling of its story of forbidden love. The film, while nearly an hour shorter than Blue, is also just as much about art as it is love or sex.

The film, in French with English subtitles, is the story of a young woman painter named Marianne (Noémie Merlant) who’s brought to an island in Brittany and commissioned to paint a portrait of a noblewoman named Héloïse (Adèle Haenel.) Héloïse is about to be married in an arranged pairing, and the portrait is meant to advertise her the prospective husband.

The twist is that Héloïse doesn't want to be painted—or married—and therefore Marianne must paint her surreptitiously, while posing as a friend tasked with accompanying Héloïse on daily beach walks. Meanwhile her sister had recently taken her own life, in order to avoid a similar marriage.

Portrait of a Lady on Fire has a lot going for it—a pair of standout performances, a gorgeous setting that consists of a large house and the beach outside, and an understated style that features virtually no music. But most of all, it's the looks—the way the two women sneak looks at one another on their way to slowly falling in love.

While Portrait is mostly a two-hander, the cast also includes the Greek/Italian actress Valeria Golino, who had a Hollywood run 30 years ago in such films as Rain Man, Hot Shots and Big Top Pee-wee, as Héloïse's mother. Also, Luàna Bajrami plays maid Sophie, the focal point of a somewhat incongruous abortion subplot, almost certainly the first abortion scene in the history of movies to take place in a bed next to a crawling baby.

Unfortunately snubbed by the Oscars—Les Misérables, which was good but not on Portrait's level, got the French slot in the International Film category—Portrait of a Lady on Fire is another triumph for newish distributor Neon, whose gangbusters 2019 slate also included triumphant Best Picture winner Parasite, along with The Beach Bum, Apollo 11, Amazing Grace and other standouts.

Portrait of a Lady on Fire, which I first saw last October at the Philadelphia Film Festival, has often been compared to Luca Guadagnino's Call Me By Your Name, between the slow-developing same-sex love story, the period setting, the enviable European house, and the climactic heartbreak. And it's very much that movie's equal.