On two films—Softness of Bodies and Downhill—about miserable Americans abroad. 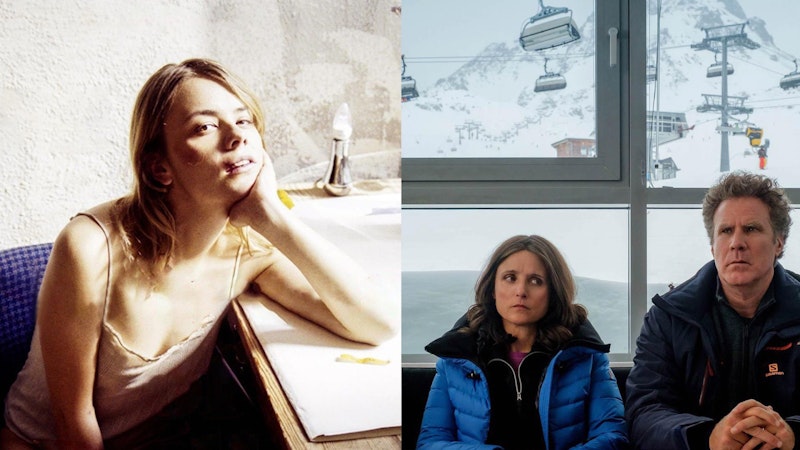 Softness of Bodies, streaming now for free on Amazon Prime, finds an American in Berlin struggling to survive as a poet. Berlin might be the only place in the world where that’s even possible (is it?), but despite the setting, Jordan Blady’s directorial debut recalls the wave of post-Girls films and television shows set in New York that ripped off Lena Dunham’s “struggling artist with no talent” bit without taking any of her bizarre charisma. Frances Ha, released within weeks of the premiere of Girls on HBO, never interested me because Greta Gerwig and Noah Baumbach aren’t interesting people. Lena Dunham is fucking weird.

Dasha Nekrasova stars as Charlotte Parks in Softness of Bodies, and she jumps out of an otherwise inert movie. Blady’s direction, and particularly his script, are unremarkable and occasionally clumsy. Even Nekrasova can’t save this line: “I burn the way money burns.” But earlier in the film, there’s an excellent example of Nekrasova’s rage: hanging out with one of many boyfriends (all of them hangdog eunuchs, stock mumblecore characters), she asks him to read one of her poems. “Read it-READ IT!!” She explodes, briefly, and it’s the most volatile Softness of Bodies gets. But that scream is enough; it’s a reminder, a calling card. The shift at the end, along with an earlier accusation of plagiarism by an uptight rival, suggest a more sinister movie, something closer to the social media horror of Ingrid Goes West. Charlotte isn't a sociopath like Aubrey Plaza's Ingrid, but close enough for fun.

Softness of Bodies follows a very familiar pattern: writer bikes around a city, has sex, breaks up, goes to parties, does drugs, succeeds, regrets, moves one step forward and five steps sideways. Never have one of these movies or shows ended with their narcissistic leads hanging themselves, or accidentally overdosing, and so on. Why not? That's the reality of so many struggling artists: anticlimax. In such an exhausted genre, you need a compelling lead and something extra to reinvigorate what was said and done by Girls and Greenberg. Like Isabelle Huppert, Peter Sarsgaard, and Michelle Williams, Nekrasova lifts everything she’s in. Blady’s ending is great and I wish it was the set up: Charlotte Parks runs around Berlin trying to pay off every friend and lover to work over a crime we know nothing about.

Slinking on speed in the shadows of Berlin, Parks tries to get off in more ways than one… and then! Vacation to Bavaria. Better yet, Austria. On the plane, listening to Joni Mitchell singing about David Geffen wandering around the Champs Elysees looking for his “very good friend”—that’s a vacation. Commoners get the vacation industry, best documented and eviscerated by David Foster Wallace in A Supposedly Fun Thing I’ll Never Do Again, where “mandatory fun” rules and regimented activities and militaristic itineraries are “maximizing” instead of “completely fucking insane.” Ruben Östlund’s 2014 film Force Majeure didn’t have anything new to say about the vacation industry, but that set-up—a family of four eats on the deck of a ski resort when an avalanche comes, and the father runs away while the mother clutches the children through the harmless false alarm—is hilarious and brilliant way to begin a movie about the implications of a man abandoning his family in an emergency.

Downhill is the new American remake starring Will Ferrell and Julia-Louis Dreyfus. It’s too faithful to Force Majeure, a dry ice comedy of bourgeois marital matters in the French Alps. This movie should’ve been a crazy farce with people fucking and getting injured and killed, whatever—more slapstick. Because Americans trying to mash a Scandinavian sensibility into a dull dishwater dramedy really blows. The world does not need more humor like The Office.

Downhill turns one of the subtlest comedies in recent memory into a one-dimensional, one-note, very obvious, surface-level story. The romantic arc of this couple is not what made Force Majeure interesting. Absent any rude jokes in overdrive, what’s to like?

A missed opportunity—I believe in remakes, they’re just like covers. Filmmakers should remake other films more. But not like this, this is band practice. A great American remake of Force Majeure could star Ferrell and Dreyfus, but it’d need more characters, less time with the couple and the kids on their own. Ferrell and Dreyfus could’ve gone on a marital adventure in overdrive like Ryan O’Neal and Madeline Kahn in What’s Up, Doc? There could’ve been explosions, careening down the slopes, a spray gun of one liners, sight gags, and juvenile set pieces. It would’ve been great. This was the wrong approach: Will Ferrell doesn’t get hit in the balls once during Downhill. Nobody dies a sudden, tragic, hilarious death, as in The Beach Bum, where Isla Fisher bleeds out in an ambulance not even half an hour into the movie. Harmony Korine’s Florida farce from last year should be the standard against which all American comedies are judged: 90 minutes of hysteria, absurdity, and insanity. Downhill is a bore next to it.