Feminism Fights For A New Generation

Hollywood and specific directors are hoping the under-30 girl is looking for a grittier kind of girl power, one based more on professionalism and toughness than on credit cards and babies. 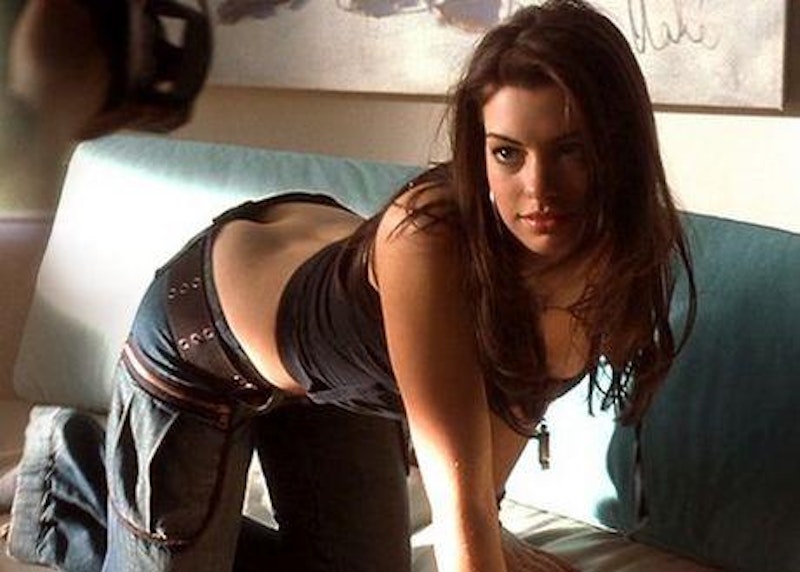 Talk to any feminist over the age of 40 or 50, and you're likely to hear a sigh of resignation at the state of women in Hollywood, in front and behind the camera. Young women today just care about Sex and the City, he or she might say. "Post-feminism" reigns, and it's the bane of the old school feminist's existence.

Is post-feminism dead? Hardly. But it seems a spate of movies have come out—and will come out—that challenge the post-feminist regime.

And they're specifically targeted at the youngest women.

Of course, young women still care about feminism and women in Hollywood, hence the revival of the Bechdel test. The idea that all young women are "over" feminism is ridiculous. (The opposite of "feminist" being a kind of compromised, consumerist, stay-at-home, sex-driven, take-my-husband's-last-name "feminism.")

Over the past few years there have been murmurs of a "feminist reawakening," as New York suggested during the ill-fated campaign for Hillary Clinton. Gen Xers in particular, perhaps embodied by Tina Fey, started to speak up for the candidate. But their younger Millennial counterparts demurred.

Now Hollywood and specific directors are hoping the under-30 girl is looking for a grittier kind of girl power, one based more on professionalism and toughness than on credit cards and babies.

Take, for instance, last year's Oscar crop, whose feminist entries included Winter's Bone, True Grit and, not uncontroversially, Black Swan. These films, particularly the first two, focused on young women who had to overcome personal (a dead dad), political (a deadbeat dad) and professional (ballet) challenges using their brains and skills. They had to confront powerful men who make the rules and struggle to survive in a patriarchal world. And they succeeded (once again, Black Swan, not uncontroversially, but I say yes).

This past month two more entries duked it out for the post-post-feminist mantle. Hanna, a brilliant tale of a young girl on a revenge mission, and Sucker Punch, a less than brilliant of young girls in skimpy outfits.

Needless to say, Sucker Punch strives for girl power, but seems out-of-step. The main character's name is, laughably, Babydoll. Says critic Elizabeth Weitzman, the film's women are "simply required to look great in thigh-high stockings until they meet their careless fates." Indeed, the vast majority of its audience its opening weekend (64 percent) was male, most under 35.

For me, one of the main issues in terms of women’s place in society and feminism is the sexual objectification of women [...] That’s something that feminists in the ’70s tried to fight against but has been totally lost in the 21st century consumer-celebrity world. So for me, when I look at the poster for Sucker Punch it seems actually incredibly sexist, because it is sexually objectifying women regardless of if they can shoot you or not.

Wright has a film to promote; that's why he picked a fight. But Hanna delivers the goods. The taut film is really about a power struggle between two women: Cate Blanchett's government official, trying to track her down, and Saoirse Ronan's Hanna, trying to find out who she is as the government tries to capture her. Hanna kills scores of men in about 90 minutes, and the ones she doesn't disappoint her (by dying). The boy who tries to give her a first kiss gets his face on the floor (Hanna might swing the other way).

Recent films are trying to split the difference between Salt—which puts a middle-aged woman in a sea of testosterone (Salt barely speaks to another woman in the film)—and Alice and Wonderland, the billion-dollar film of a girl's journey to self-discovery.

Two of the buzziest projects in development right now explore tough women fighting oppressive regimes: Suzanne Collins' teen sci-fi series The Hunger Games and Stieg Larsson's thriller The Girl With the Dragon Tattoo. The latter has already been a global hit for the Swedes (and I doubt the American version, starring Daniel Craig and Rooney Mara, can top it), and the former, starring Winter's Bone's Jennifer Lawrence, is expected to challenge Twilight for the hearts of young women. Where the post-apocalyptic Hunger Games involves Katniss Everdeen struggling against an authoritarian regime, Dragon Tattoo has Lisbeth Salander grappling with our current government.

Dragon Tattoo has the clearest feminist thread. Throughout the films, the "state," embodied by men, literally rapes and prosecutes her, forcing her to physically and technologically fight and manipulate the system to be free. That Lisbeth, like Hanna, has lesbian tendencies (or is lesbian) is no surprise.

Producers and distributors must be hoping that these days, with women outnumbering men in the workforce for the first time and carrying their families in a recession, the glamour of maternity benefits and luxury shopping will seem passé.

It makes a great deal of sense and couldn't be more refreshing. After watching all the Twilights, where Bella lacks any agency except to quiver in fear and ache for marriage, I could use a few young women with something for which to fight.