The enduring power of the catchphrase. 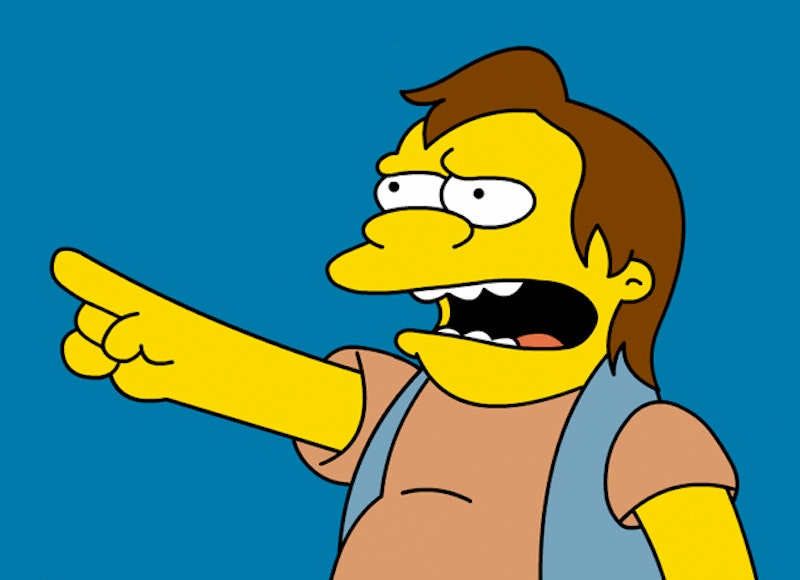 One of the funniest sketches on Saturday Night Live this season has been "The Kings of Catchphrase Comedy," a fake trailer for an Original Kings of Comedy-style standup concert film. Host Zach Galifianakis and members of the SNL cast played a variety of fictional comedy hacks whose acts centered around yelling one nonsensical phrase like "beef jelly" or "slappy pappy" over and over in lieu of an actual punchline. It was an incisive and spot-on critique of one-dimensional comedy superstars like Larry The Cable Guy of "git 'er done" fame, but it was also hilarious largely because of the combination of repetition and utter silliness that makes catchphrase comedy so popular to begin with.

The "Kings of Catchphrase Comedy" sketch perfectly encapsulated the odd double bind involved in parodying lowbrow comedy, which has increasingly been one of the dominant themes of ostensibly smarter, hipper comedy. By mirroring or exaggerating a dumb but popular comedy phenomenon, you often end up with something just as broad, and potentially popular more for visceral silliness than subversive satire. Sometimes an established catchphrase is appropriated by another show, as a commentary on a character's cheesy sense of humor, like The Office's Michael Scott endlessly parroting "that's what she said" long after it was popularized by Wayne's World. Sometimes a catchphrase's creator can mock it later on, as Kevin Smith did in Jay & Silent Bob Strike Back, when he ridiculed the "snoochie boochies" catchphrase the title characters originated in earlier films.

But when a catchphrase is created for the express purpose of deriding catchphrases, a tricky balancing act ensues. And more and more, comedy writers want to create a catchphrase that fans can repeat over and over while ridiculing the idea of catchphrases. Here are 14 examples of meta catchphrases that straddle that line, sometimes trying to have it both ways and sometimes picking a clear side

After creating an international phenomenon with the original BBC version of The Office, Ricky Gervais decided to cap the show at just two seasons and move onto other projects, perhaps out of fear of the need to repeat himself or fall into the creative rut of producing the same show year after year. And the next short-lived series he created, Extras, affirmed that attitude by satirizing show business with the story of a struggling actor, Andy (Gervais), who eventually finds success when his spec script is turned into a popular sitcom called When The Whistle Blows. But as collaborators gradually make Andy's script more broad and silly, he achieves fame for his character's catchphrase: "Are you 'avin' a laugh? Is he 'avin' a laugh?"

"Whammy!"—Anchorman: The Legend of Ron Burgundy

"No whammys" may be an actual catchphrase on the game show Press Your Luck, but an affirmative variation was a meta catchphrase for one of Will Ferrell's sidekicks in Anchorman, the sportscaster Champ Kind (David Koechner), who introduced himself early in the film by coming right out and saying "I'm kinda known for my catch phrase: WHAMMY!"

"I need a catchphrase!"—Sit Down, Shut Up

Sit Down, Shut Up was a short-lived animated series created by Mitch Hurwitz of Arrested Development fame. And the show's unimaginative mediocrity can be summed up by the fact that one character, Stuart (voiced by Will Forte), was always walking around saying "I need a catchphrase," even carrying a coffee mug with that very sentence emblazoned across it. His catchphrase never caught on, and Sit Down, Shut Up was shut down after 13 episodes.

30 Rock constantly satirizes bad comedy and show business clichés, often via the funny-not-funny antics of Tracy Jordan (Tracy Morgan), who can often be heard enthusing that he likes something so much he's going to "take it behind the middle school and get it pregnant." Even Liz Lemon (Tina Fey) stumbled upon a catchphrase, "that's a dealbreaker, ladies," that led to a book deal and her own talk show. But the most self-aware 30 Rock catchphrase was when one of the stars of the show-with-in-a-show TGS, Jenna (Jane Krakowski), parlayed her weight gain into a popular sketch in which her catchphrase was "me want food." Further blurring the line between a meta catchphrase and an actual catchphrase, the 30 Rock website sells "me want food" t-shirts.

The 1990s animated series The Critic starred Jon Lovitz as Jay Sherman, a curmudgeonly movie critic whose Siskel & Ebert-like program featured him not giving thumbs up or down, but simply declaring virtually every film under review to be a stinker.

"Tyler no likey"—How I Met Your Mother

How I Met Your Mother functions as good evidence for the argument that unironic catchphrases are not merely the province of knuckledragging old-fashioned sitcoms. The CBS series is consistently one of the most clever and inventive shows on TV, and its breakout character, Barney Stinson (Neil Patrick Harris), is practically a catchphrase machine, parroting his trademarks "suit up!" or "legen...wait for it...dary" in nearly every episode, among countless other catchphrases and running gags. So it was either totally hypocritical of the show's writers of shrewdly self-aware in the fourth season episode when it was revealed that Barney had hired actors to play his son and wife and convince his mother he was a family man, and Barney's fake son Tyler kept going off-script and trying to start his own catchphrase, "Tyler no likey," much to Barney's displeasure.

"By Grabthar's hammer, by the suns of Warvan, you shall be avenged!"—Galaxy Quest

The 1999 film Galaxy Quest centered on the cast of a Star Trek-like sci-fi show of the same name, in which Sir Alexander Dane (Alan Rickman) played a Spock-like character named Dr. Lazarus. And just as Spock had "live long and prosper," Lazarus had his own particularly goofy and verbose catchphrase.

Community constantly parodies and comments on television tropes, often via the character Abed's pop culture-obsessed self-awareness, from the Same-and-Diane tension between two other characters to the concept of doing a "bottle episode" (look it up). But the show can also be subtle with its satire, particularly with their handling of catchphrases with Magnitude, a community college student who pretty much only ever says "pop POP!" He's only appeared in two episodes so far, but in the second one, Magnitude is suddenly a popular candidate for student body president and giving campaign speeches in which he simply says "pop POP!" and the sheep-like audience excitedly responds "pop POP!"

"I wanna dip my balls in it"—The State

The MTV sketch show The State frequently lampooned dumb comedy in a way that was itself kind of goofy, and when the network requested a recurring character with a catchphrase, the hostile sketch troupe responded sarcastically by creating Louie (Ken Marino), a guy who simply walks around holding two golf balls and saying "I wanna dip my balls in it." Another one of the show's most popular characters similarly but less explicitly parodic catchphrases: a guy named Doug who always said "I'm outta here."

"Are we having fun yet?"—Party Down

The great but little-seen Starz series Party Down (which co-starred Ken Marino of "I wanna dip my balls in it" fame) centered on a catering company staffed by struggling showbiz wannabes. One of them, Henry (Adam Scott), gave up on his acting career after he became famous for saying the phrase "Are we having fun yet?" in a series of beer commercials. Inevitably, Henry would occasionally be tormented by a party guest recognizing him and demanding him to parrot his catchphrase.

As with most of Christopher Guest's mockumentaries, Fred Willard upstaged the rest of the cast with his character, folk singer manager Mike LaFontaine, whose claim to fame was a short-lived 70s sitcom called Wha' Happened? in which his character would haplessly turn to the camera and ask the title question.

On the titular show-within-a-show, late night host Larry Sanders had a sidekick named Hank Kingsley (Jeffrey Tambor), who, like Ed McMahon and his famous "hiyo," would constantly say "hey now!"

"I'd buy that for a dollar!"—RoboCop

One of the most memorable and cutting satires of catchphrases comes not from a comedy but from the sci-fi classic RoboCop. A popular TV show (not explicitly named in the film but revealed in a DVD commentary to be titled "It's Not My Problem") features the catchphrase "I'd buy that for a dollar!" that every idiot in the film's bleak dystopian future thinks is hilarious.

"I didn't do it"—The Simpsons

Perhaps no sitcom in TV history has produced more popular catchphrases than The Simpsons, or mocked itself so mercilessly for it. Comic Book Guy's "worst episode ever," often used as a meta critique of The Simpsons itself, originated in an episode in which Homer voiced Poochie, a cartoon dog who said things like "kids, always recycle ... TO THE EXTREME!" In another episode, a character who shares Homer’s name on the TV show Police Cops had multiple catchphrases (first, "and that's the end of that chapter," then the old commercial tagline "Uh-oh, Spaghettios!"). But the show's definitive self-immolation was the 1994 episode "Bart Gets Famous," in which Bart’s utterance of the phrase "I didn't do it" accidentally becomes a national phenomenon, not unlike how the Bart character spawned catchphrases like "eat my shorts" and "don't have a cow, man" in real life. The episode concludes with one more bit of meta overload, as Bart's sister Lisa tells him "Now you can go back to just being you, instead of a one-dimensional character with a silly catchphrase," which cues no fewer than eight other characters to show up and recite their own catchphrases.