A Supernatural Coming of Age Tale

Black Swan is funny, scary and deep.
Grade: A 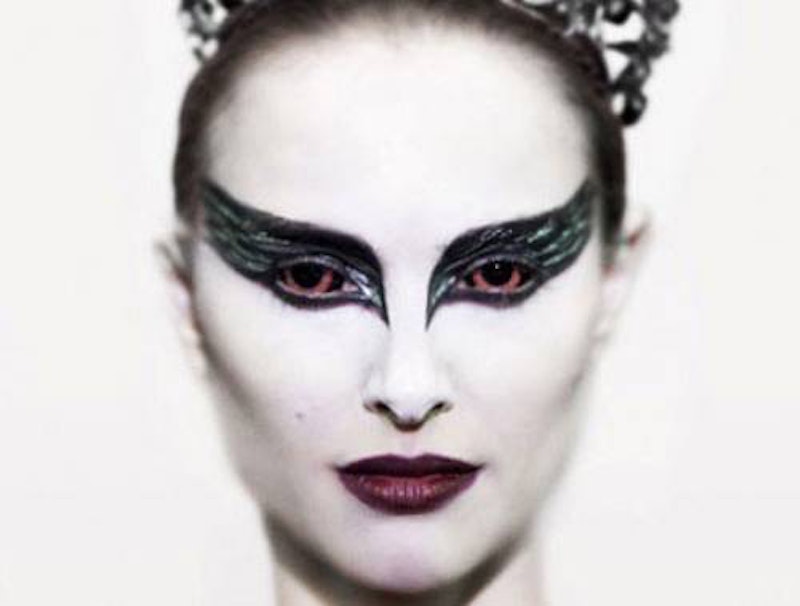 There are a lot of ways to screw up movies about women. So warped is the film market, directors have few examples to draw from: Most films, mainstream and independent, are about men. We can even test for it.

Like a ballerina en pointe, Black Swan maintains an athletic sense of balance: between a woman’s weakness and strength, fear and courage, objectification and empowerment, not to mention horror and truth, natural and supernatural. Darren Aronofsky treats ballet as both sport and art, as in The Wrestler, giving Natalie Portman a role to match Mickey Rourke’s and the audience a thrill ride as meaningful as it is fun and frightening.

Black Swan, at its simplest, is a retelling of Swan Lake. Portman plays dancer Nina, who is entering those years in dance where if you’re not yet a star, you’ll never be one. Her last chance is as the lead as the Swan Queen, one of the most difficult roles in ballet—according the dancer sitting next to me at the screening. To get the role, Nina has to embody both the White and Black Swan, controlled and fragile but also wild and sexual. She’s got the White Swan down but is too repressed or closed in to master the Black.

She eventually gets the role: but throughout the film, she has to grapple with her own insecurities and the sexual politics of the ballet world, surrounded by older women who slept with the artistic director only to be burned in the end, and by younger women who’ll do anything for the part.

Nina’s job is not—as it is in a lot of films about women—to “let go,” nor is it to maintain control. She has to mature, in the fullest sense of the word. It’s become a cinematic cliché to have women as the uptight control freaks to the sexy ways of sluts and lazy cool of men (see: every Vince Vaughn or Judd Apatow film, and the David Denby essay on this exact topic). Black Swan comes close to these clichés but never settles—en pointe!—instead transcending the entire debate in perhaps the only way possible: the supernatural.

Black Swan is as much about horror—the horror of letting go, getting old, growing up—as ballet. Nina’s existential crises come out in the strangest ways, though if you know Swan Lake it’s quite obvious. Swan Lake leads its protagonist to her death, divided as she is between men. In Black Swan, Nina is reincarnated after she divides her self. It’s really quite masterful.

Aronofsky is nothing if not inventive, his work with the camera just short of magic. Dance is surprisingly hard to film: too close and you miss the choreography, too far away and it looks like you’re watching a play. Aronofsky gives us everything, moving with the dancers as if we are one of them, experiencing Nina’s artistic and personal transformation up close. The first scene is genius, using dance to depict a dance, a dream and a nightmare all at once, the kind of subtle blending of genres well-executed throughout the entire work. We are then treated to some wonderful editing and shot construction; at one point the camera actually bounces with Nina as she spins. “I wanted to dance with the dancers,” Aronofsky said at my screening. That he did.

There’s been a murmur of Oscar buzz for Natalie Portman, and it's well deserved. It’s hard to play a dancer. You have to execute the moves correctly (to the trained eye, Portman gets an OK; for the rest of us, she pulls it off) while still, you know, acting. Not only that, Nina is a character who’s a slave to her desire to be perfect. In many ways, her seeming repression is quite recognizable, bordering on a young-girl stereotype: she doesn’t eat, she’s asexual, and she once engaged in cutting (sort of; she scratched, we’re told). In one scene, Aronofsky comes up with one of the cleanest ways to show female sexual repression; it involves masturbation, but I won’t spoil it. Portman plays it stiff, yet soft and willing. Her eventual awakening is all the more impressive and stirring.

During the q&a after the film, Aronofsky characterized Nina as a woman trapped in a girl’s body. In many films, this conundrum is resolved through sex: get laid and find yourself, or find a man and find yourself. Nina flirts with this, but ultimately finds both in her craft and in herself. She doesn’t want to be like the older ballerinas. She reaches within—to the dark, sexual and utterly ridiculous depths to emerge, if not stronger, at least with a sense of self-knowledge, a rare and beautiful thing.