Denis Villeneuve did what many said what impossible and made a good movie out of Frank Herbert's legendary book, unlike David Lynch. 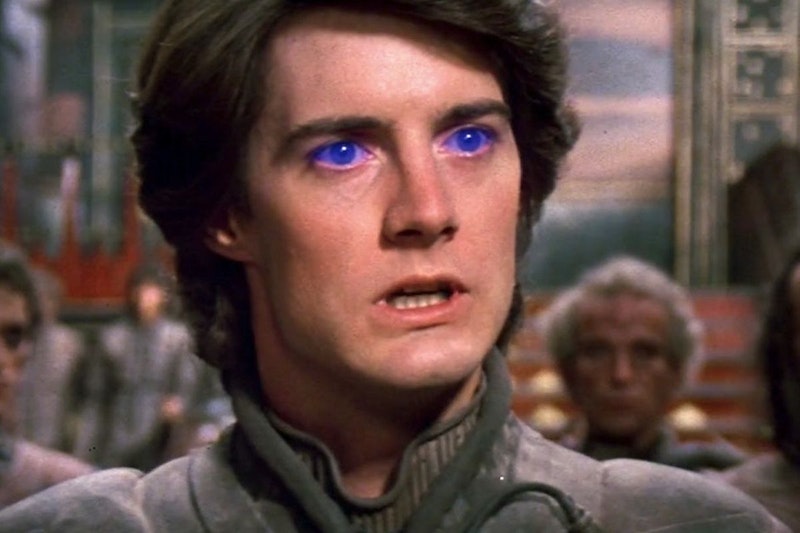 Denis Villeneuve did what many thought was impossible and successfully adapted Frank Herbert’s Dune to the big screen. Splice Today’s Bill Asher calls it “a cinematic tour de force.” Herbert’s classic sci-fi epic was long considered to be “unfilmable” with the book’s nearly 900 pages—including four appendices at the end—and a complex fictional universe with its own history, religion, and culture, making it impossible to condense into a single movie.

Many attempts have been made, though, including David Lynch’s 1984 movie adaptation. Since Dune was the only Lynch movie I hadn’t seen, I recently watched it to see if it lived up to its infamous reputation. I now understand why Lynch wants to distance himself from it.

The film begins with a close-up of Princess Irulan’s face explaining the premise of Dune: it’s 10191, and the most powerful substance in the universe is a psychedelic spice called Melange (a.k.a. “The Spice”), which can only be found on the planet Arrakis. The people of Arrakis, the Freman, believe that one day a messiah will liberate them. Meanwhile, Padishah Emperor Shaddam IV (Irulan’s father) fears the growing political popularity of Duke Leto Atreides, so he sets up a trap by ceding part of his control of Arrakis to the Atreides. As soon as the Atreides settle in Arrakis, their enemies the Harkonnens attack.

Leto’s son, Paul Atreides, is particularly a target because he’s the product of the Bene Gesserit’s (a powerful all-female political/religious group) breeding program to hopefully be the Kwisatz Haderach: an Übermensch-like figure who’ll be seen as a messiah to the universe but is just a political tool for the Bene Gesserit. After the Harkonnens attack the Atreides and kill Duke Leto, Paul and his mother Lady Jessica escape to the desert and meet the Fremen, who ask him to teach them fighting skills known as “the weirding way.” Paul and the Freman halt all Spice mining and launch an attack on both the Emperor and the Harkonnens. The enemies are defeated, and the film ends with Paul declaring himself to be the messiah by bringing rain to Arrakis.

The film has good moments. It features many of Lynch’s trademarks—including machines humming in the background, surreal dream sequences, and Jack Nance—gorgeous cinematography from Freddie Francis (who’d previously worked with Lynch on The Elephant Man), and a soundtrack by Toto that’s way better than the crappy yacht rock they’re best known for. Patrick Stewart, Max von Sydow, Kenneth McMillan, and even Sting are all fantastic. Kyle MacLachlan is okay as Paul.

Yet the negatives outweigh the positives. The blue screen effects are awful, the film tries to cram in too much information within its 137-minute runtime, and, worst of all, it’s boring.

It takes a unique director to successfully translate a book’s complex universe to film. Peter Jackson was able to do it with his Lord of the Rings trilogy; even people who hadn’t read J.R.R. Tolkien’s original books were able to understand the ways of Middle Earth. Lynch, however, fails at this. Instead of feeling immersed in Herbert’s fictional universe, the movie hits all the book’s major plot points without any depth, leaving the audience wondering what they watched. We never know who these characters really are or what motivates them. All we get are numerous voice-overs indicating the characters’ inner thoughts, which is annoying.

Lynch’s Dune is no different than reading a Wikipedia synopsis of the book.

Many have criticized the portrayal of chief antagonist Baron Harkonnen as another cliched queer-coded villain. His face is covered in facial lesions reminiscent of those caused by AIDS, he seductively runs his hands over a boy as he pulls out his heart plug, and he salivates over the sight of his half-naked nephew Feyd-Rautha stepping out from a steam shower. Since Dune was released at the beginning of the AIDS epidemic, it’s easy to read Baron Harkonnen as a warning against becoming involved with the “deviant homosexual lifestyle.”

Despite the movie’s numerous problems, Herbert liked Lynch’s Dune, except for the fact that Lynch changed the ending. “Paul was a man playing god,” Herbert wrote in the introduction to his short story collection Eye, “not a god who could make it rain.” One of the main themes of the Dune series is to not blindly follow leaders. The Freman jihad Paul inspired in the first Dune book gets out of control in the second book, Dune Messiah, leading to his downfall. Had Lynch’s Dune been successful enough for a sequel, it’d be hard to make Paul a false messiah after establishing that he could perform miracles.

Lynch isn’t solely to blame. He originally wanted to make Dune a three-hour film, but Universal Pictures demanded just two hours, so producers Dino and Raffaella De Laurentiis heavily cut the film. Lynch disowned the film as soon as it was released. He even had his name removed from the extended cut the studio made for television with extra scenes; the credits list the director as “Alan Smithee,” and the screenwriter as “Judas Booth,” Lynch’s way of saying the studio murdered his film.

If good came from Dune, it inspired Lynch to become the filmmaker he is today. His followup film, 1986’s Blue Velvet, was a critical success and established Lynch as one of cinema’s greatest artists. Universal Pictures gave him the opportunity to make a director’s cut of Dune, but Lynch declined, focusing instead on making the films he wanted to make. “Don’t make a film if it can’t be the film you want to make,” he said in an interview years later. “It’s a joke, and a sick joke, and it’ll kill you.”