The Brothers Bloom is Duplicity for people who like their movies weird-for-the-sake-of-weird. (Grade: B) 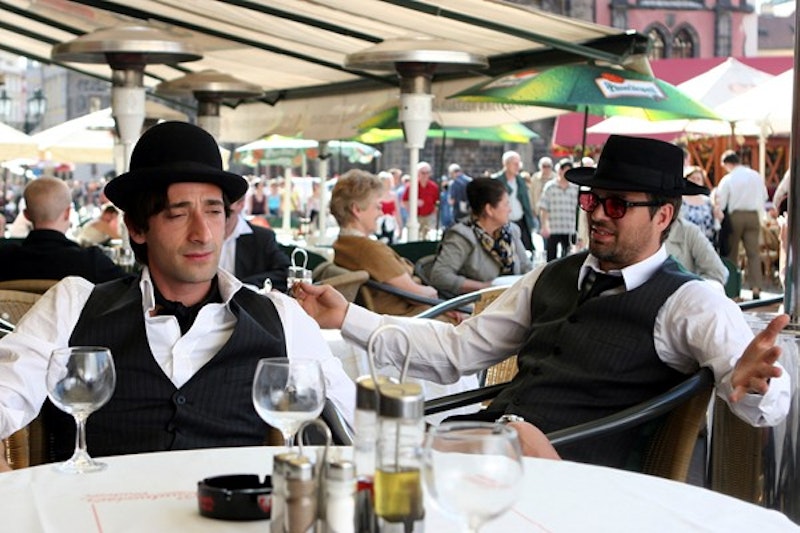 If you want to know whether you'll like The Brothers Bloom, ask yourself if a character aroused by routine weather patterns would annoy or excite you.

If the above scenario doesn't make you chuckle, pique your interest or at least make you think "what the hell?" in a good way, then maybe The Brothers Bloom is not for you. If on the other hand, you have a zest for the picaresque and the peculiar, then The Brothers Bloom is the quirky adventure film you've been waiting for since the The Darjeeling Limited.

Director Rian Johnson (Brick) has executed a taut and brisk film about a team of con artists and their winsome mark, Penelope (Rachel Weisz). The whole charade works, of course, only if you like movies that wink and smile at a rate of one quip per minute. I do!

Unlike Brick, a similarly stylish movie filled with characters who were smarter and more cunning than you, The Brothers Bloom takes almost nothing seriously. The film is filled with well-constructed shots and visual gags. In a running gag, something ridiculous happens in the background—a falling tree, aimless camel, towed car—while something serious occurs in the foreground. One clever shot had Bloom's (Adrien Brody) head superimposed over a graffiti sketch of a man aiming a gun to his head; his brother, Stephen (Mark Ruffalo), opens the graffitied door and slams it, setting off a "bang!" like a gunshot. Trust me, it's smart. Throughout the film there are innumerable nods to Scorsese and Wes Anderson, enough to keep even the most ADD-inflicted viewer entertained.

Even with all this going on, though, Bloom lacks suspense. What holds our interest is not so much the plot—which is forgettable—as the characters' hijinks and snappy interactions. Every time we think the movie is beginning to drag, get too serious or become predictable, Johnson pulls us back in with some visually pleasing or otherwise diversionary spectacle.

The ruse works well until the end when our eyes have become accustomed to the bright flashes of virtuoso filmmaking and we realize that we have no real attachments to the characters. It's not the actors. All the actors are what they need to be: Weisz is adorable and sympathetic, Brody is brooding, Ruffalo is commanding, and Rinko Kikuchi is devilishly imperious. They aren't much more than that, but for most, that's all they will need to be. The movie is so clever—more in style than in plot—that their existential crises function only as icing on the director's lavishly constructed cake.

Bloom is a filmmaker's film. The lighting, the editing, the camerawork, even the costumes are all supremely planned. Everything pleases the eye. Not a moment is drab or sloppily put together.

The Brothers Bloom is fun, which, like Duplicity, makes this con-artist caper a recession-ready bonbon tossed deftly into the eager mouths of gluttonous moviegoers like myself. Empty calories, yes, but there's a reason we eat sweets.

The Brothers Bloom, directed by Rian Johnson. Now doing the festival rounds; out in wide release May 29.