Why this twisted Bill Hader character is the best thing Saturday Night Live has going for it right now. 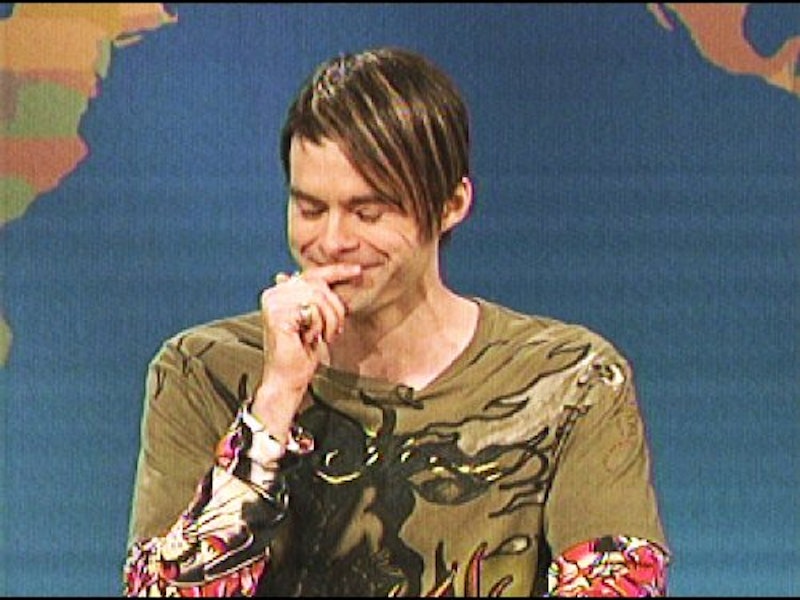 Bill Hader is not a gaffe-prone sketch comic; he’s a consummate professional. This means that whether he’s pretending to be the nattering Italian talk show host Vinny Vedecci, insulting Hollywood Dish co-host Buddy Trunk, or political consultant James Carville on Saturday Night Live, he almost never breaks character; reliably and admirably, he keeps a straight-if-rubbery face as he leaves audiences in stitches, which is no small feat when you’re tasked, on occasion, with impersonating NBC creepazoid Keith Morrison.

Stefon is an exception. Hader hasn’t yet played him entirely straight, and the character’s primary physical tics—the tendency to cover the face with both hands then raise and lower both hands frequently, as if flapping them—is clearly a coping mechanism intended to allow the actor to make it though performances without losing his shit entirely. That this has never happened—well, never entirely, anyway—is a testament to Hader’s formidable talents, because Stefon is fucking cracked.

The character first surfaced in a November 2008 skit where Hader and Ben Affleck pitch movie concepts to Hollywood suits; Affleck’s ideas are wholesome, middle-of-the-road all-American pap, whereas Hader’s are the stuff of gay-fetish club/porn nightmare interludes.

Since then, the “Weekend Update” segment has been Stefon’s stomping ground. Fittingly, this allows for delicious subculture vs. larger culture clashes between Seth Meyers’ not-quite-stentorian, straight-world-standard bearer anchormanisms and Stefon’s rancid cornucopia of perversions, underground lingo and affectations. Amazingly, this never, ever gets old; if anything, repetition has actually made Stefon’s visits even funnier.

The setup is static: Stefon is the "Weekend Update" city correspondent, and Meyers invites him on the show to suggest wholesome family activities for tourists visiting The Big Apple. An anxious, socially-retarded Stefon acquiesces by naming one or two disturbing clubs and ticking off provocatively bizarre themes and fetishes (human bathmats, Teddy Graham people, Furkels—don’t ask) one might find within.

Stefon: Seth, New York’s hottest club is Gush. Club owner Gay Dunaway has built a fantasy world that answers the question, “nooow?” This place has everything: geeks, Sherpas, a Jamaican nurse wearing a shower cap, room after room of broken mirrors, and look over there in the corner: is that Mick Jagger? No, it’s a fat kid on a slip n’ slide—his knees look like biscuits, and he’s ready to party.”

Inevitably, exchanges like the following ensue, to much audience hilarity:

Meyers: What is … a human Fire Hydrant?

Stefon: You know it’s that thing … when high-waisted midgets … have like … the red.

Meyers: It’s important that people know what this is.

Stefon: Mmm. It’s that thing when high-waisted midgets have like the red pants and the big ass.

Meyers flashes the audience a sheepish grin, then presses Stefon for a locale, venue, or activity that “normal families” might really enjoy, whereupon Stefon proffers something even more preposterous than what he’d originally suggested—and Meyers gets to lob book-ending clinchers like “You took us on a tour of a coked-up gay candy land.”

So: is this mean-spirited homophobia? Nah. In his own way, Stefon’s no different than the Star Trek-obsessed fan boys who pelted William Shatner with arcane continuity questions: he’s so immersed in the particulars of his world that everything beyond the parameters of that world are as macabre to him as the nightclubs he frequents seem to most viewers. Look beyond the lascivious eye rolls and the sideways haircut and the suggestive, breathy gasps, and you have in Stefon a herald or champion or ambassador for the esoteric, the forbidden, the unseen—sort of a cross between Mike Myers’ classic SNL character Dieter and the role Joaquin Phoenix played in 8MM. Whether or not NYC is actually home to fetish dens where in-the-mood questers can find “ghosts, banjos and Carl Paladino” is immaterial; the Saturday Night Live audience can surmise that somewhere, someone is getting off on even harder, weirder conceptual mash-ups, so the writers can be as outré and off the wall as they wanna be. These days, no other SNL character dares to be this subversive, edgy, or downright deluded. Thank God for Stefon; he keeps us watching.