The Digital Resurrection of the Avant-Garde 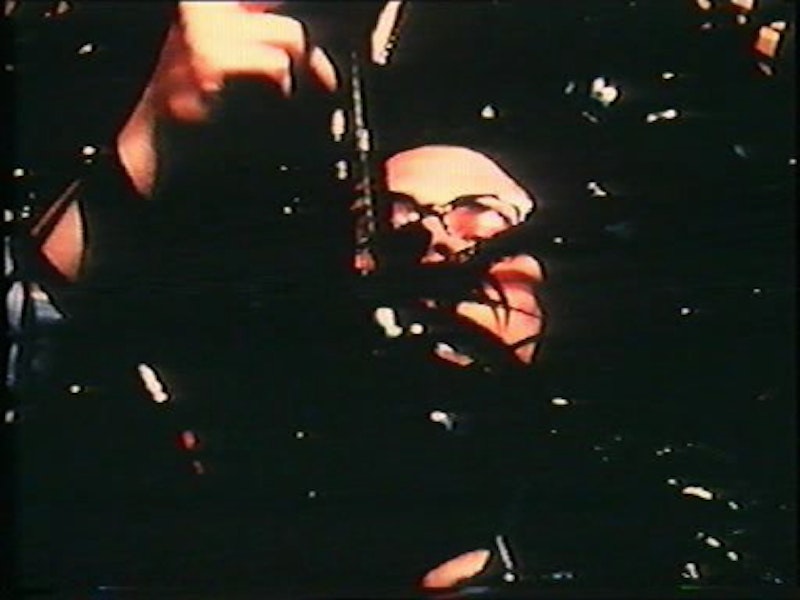 In 1971, filmmaker Hollis Frampton embarked on one of the most ambitious cinematic projects in the history of the medium: the Magellan film cycle, a 36-hour meditation on life and death intended to be shown in fragments on specific days over the course of a year. Though he only completed eight hours of the project by the time he died in 1984, the finished material is dense and powerful. The concluding film in the cycle is one my favorite movies, Gloria!, a 10-minute half-essay/half-poem that uses simple gestures to unpack observations on a number of topics, but focuses primarily on Frampton exploring memories of his late maternal grandmother, to whom he dedicates the entire film cycle.

The ambition and artistry of Magellan should earn it a hallowed place in the annals of film history, to be seen and discussed by anyone who proclaims a true love of cinema. But Frampton's work is largely unavailable. Only one of his 40-plus films has ever been put on DVD or VHS, with the rest of his work available only through institutional rental of 16mm prints, which means that outside of a university classroom, a museum with a screening room, or an uncommonly artsy movie theater, Frampton's great cinematic experiments might as well not exist. And Frampton is far from alone. There is an entire parallel world of American cinema—filmmakers such as Jonas and Adolfas Mekas, Bruce Baillie, Yvonne Rainer, George and Michael Kuchar, Michael Snow, and others—that is similarly lost to the viewer-at-large.

I scoured the Internet a few years back, searching for proof that Gloria! and its ilk do in fact exist—that they weren't merely fever-dreams that I hallucinated once upon a time while hungover in film history class. Expecting to find maybe a blog post or an article, hoping for an unlikely film screening or even a more improbable DVD release, I was shocked to find Gloria! available in its entirety on YouTube. This amazing film was just sitting in my browser window. I was overcome.

Just as Frampton was not alone in unavailability, he was not alone in the Internet. I found many other films from the American avant-garde lurking around sites like Daily Motion, Google Videos and others. Some were collected together and organized at UbuWeb, a fantastic resource site dedicated to curating the avant-garde on the web, but others were just laying around in strange corners of the Internet to be stumbled upon, like artifacts from a ghost history of a lost cinema, slowly leaking back into existence.

The wealth of material available today on UbuWeb and across the Internet is staggering, and completely changes the accessibility of experimental cinema. That I can open up a Firefox window and watch George Kuchar's Hold Me While I'm Naked  whenever the spirit moves me—I cannot overstate the sheer glee I feel just typing that sentence. I'm going to watch it again as soon as I finish this article, and then choose from any number of possible follow-ups—maybe Yvonne Rainer's A Film About a Woman Who ... ; or Peter Hutton's Boston Fire.

Yet I also feel the need to lament the flaws and limitations of seeing these films online. My complaints about the online presence of avant-garde cinema might sound a bit like the old joke about the two women leaving a restaurant: "That food was terrible." "Yes, and such small portions!"

Simply put, there are still huge gaps in what is available online, and though UbuWeb makes a valiant effort at collecting and cataloging, much of it is still scattered. Of the films that are available, many of them frankly look and sound atrocious due to poor video transfers and the frequently low quality of Internet video streaming.

Take Bruce Baillie's 1966 film All My Life as an example. When shown from a 16mm print in good condition, All My Life is one of the most sumptuous, beautiful films you'll ever see. A tightly controlled tracking shot across a picket fence, ensconced in flowers, set against a crystal blue sky, Baillie's film is the epitome of cinematic visual excellence. To watch the version currently available online is painful; the print is faded, the frame is off, and the transfer is blurry and drained of color. The online video bears almost no resemblance to the real film.

Beyond the issue of poor transfers are those films that depend on the physicality of the medium as part of their artistic expression. Films like Tony Conrad's The Flicker, made of five frames of film spliced together in repetition, or David Gatten's What the Water Said series, made by scratching and corroding the film itself to produce images; it is hard to see how any video reproduction could adequately translate these works.

Even in those films that do "work" on video, there is something lost in the move from the darkened theater to the computer screen—more than is lost by even the finest mainstream narrative film. The Godfather may be best seen on a 40-foot screen in 35mm, but the strong acting and compelling narrative do not depend on that presentation. The film can succeed regardless of format or environment. Avant-garde cinema often relies far more on the focused space of the movie theater. A Bruce Baillie tone poem requires visual and aural immersion in order to properly assert itself into the viewer's consciousness, as do the sensory assaults of a Michael Snow or a Tony Conrad. These films can deliver aesthetic experiences found nowhere else, but their gifts are fragile, and can be easily blunted by inadequate presentation.

Despite my misgivings, the work of UbuWeb and others is a noble endeavor. Having these films once again within reach of the average viewer is an unequivocal positive. A perverse part of me can even appreciate the flaws I just complained about at length. There's something oddly appropriate to the underground and transgressive nature of these films that they be found in unexpected places, lurking in the back alleys, glimpsed in fragments, or as shades of their former selves. These films are cinematic ghosts that have transformed into digital treasure, waiting to be dug up.