A Young Nick Nolte and the Greatest Football Film Ever Made 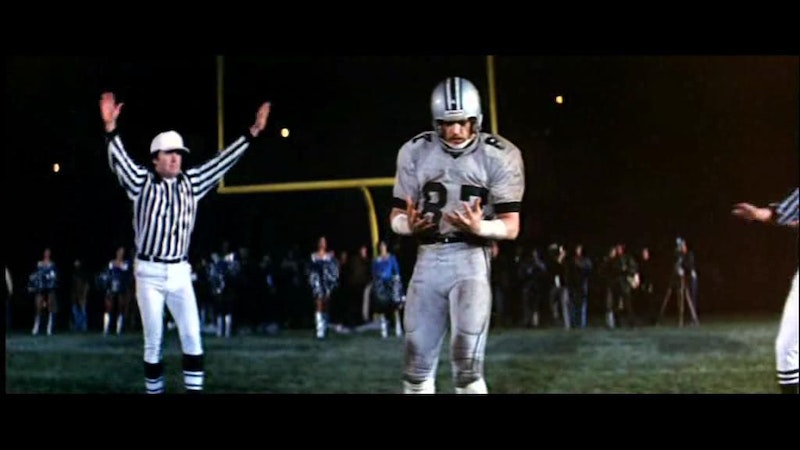 As we head into the final stretch of the NFL season, with the supremacy of the New England Patriots and their loathsome head coach, the time is ripe to escape into a little football fantasy.

No, not fantasy football; that’s madness. I mean, instead, fictional movies about football—specifically, North Dallas Forty, which is still the best onscreen treatment of the sport some 31 years after its original theatrical release.

Based on the highly regarded 1973 novel by former Dallas Cowboys wide receiver Peter Gent, ND40 tells the story of wide receiver Phil Elliott (Nick Nolte, in the midst of a run of impressively intriguing performances between boffo box office vehicles The Deep and 48 HRS.) whose playing career is nearing its end. Though maintaining his buddy-buddy relationship with star QB Seth Maxwell (country music star Mac Davis—a seemingly incongruous casting choice that turns out pitch-perfect), Elliott’s on the outs with martinet head coach B.A. Strothers (G.D. Spradlin, who else?) and, generally, feeling lost in life.

What makes the film so successful is its verisimilitude. Gent reportedly based much of his tale’s drinking/drugging/whoring exploits on the Cowboys, with Elliott a fictionalized version of himself, Maxwell a take on Don Meredith, and Strothers a stand-in for Tom Landry. Neither the Cowboys nor the NFL were too keen on either book or movie underscoring the hypocrisy of a league that condemns marijuana use while wholeheartedly endorsing the injections of painkillers as a sign of “dedication.”

The film is very funny, especially in scenes involving a couple of nutso offensive linemen played by Bo Svenson and former NFLer John Matuszak, but it’s hardly a comedy. Nolte’s Elliott is in a great deal of physical pain throughout: he’s stooped and limping for most of it, and the camera lingers over his scarred, starting-to-go-flabby body as if it’s cataloguing disfigurements at an autopsy. Davis’ good-ole-boy Maxwell is on hand mostly for laughs, but when it’s necessary he snaps into the role of commander that the best NFL quarterbacks must be; he’s also not above some of the same soul-searching that Elliott’s undergoing.

Outside of a few early flashbacks of Elliott taking bone-crunching hits on the field, there’s actually very little football played in ND40; only one game is dramatized, a matchup with playoff implications that somewhat predictably comes down to a slo-mo pass to Elliott (though the play afterwards may still surprise some). Instead, it’s these men’s lives off the field that are at the center of the drama: Bacchanalian revels to let off steam; gleefully breaking into the team doctor’s medicine cabinet to score some Dexies; sitting through numbing film sessions, to be taught that even happy on-field accidents aren’t to be tolerated; trying to vaguely make a human connection with some of the women one finds in one’s bed.

The film is well-cast throughout; on the “establishment” side, in addition to Spradlin (who had memorable roles in Apocalypse Now and The Godfather Part II, among others) there’s Steve Forrest (TV’s S.W.A.T.) as the team’s studiously cornball owner; Dabney Coleman on the cusp of finding his niche of smug villainy as a team exec; and the always welcome Charles Durning as a foul-mouthed assistant coach. Rounding things out is then-va-va-voomish Dayle Haddon as Elliott’s love interest, doing what she can with an underwritten role.

That the film was directed by Ted Kotcheff is something of a surprise, given his mostly underwhelming resume: lots of TV work, and a movie career that’s zigzagged between The Apprenticeship of Duddy Kravitz and First Blood to Weekend at Bernie’s and Folks! But his only real misstep here comes with The Big Game—not just for its inherent clichés, but also for the fact that it appears to be played at a high-school stadium in front of about a dozen people. This is more than made up for by the rest of the movie, including its classic final shot.

I’ve yet to read Gent’s currently out-of-print book, which apparently delves deeper into the sport’s underbelly and features an even grimmer ending. But the strength of ND40 endures—partly as a snapshot of its era (dig those late 70s threads, hairstyles, and disco music!), but also as a reminder of the ever-widening gulf between football as a business and as a sport (an issue that Matuszak addresses directly towards the film’s end). It’s hard to imagine today’s players simply jimmying open a medicine cabinet to score some pills, but the “moral outrage” that still greets players busted for smoking some weed—depicted in the film as more pain-killing than partying option—remains firmly in place.

I caught a half-hour or so of Oliver Stone’s Any Given Sunday on cable over the weekend, and while watchable, it still doesn’t hold a candle to ND40. Lump-in-your-throat dramas like Remember the Titans, Rudy and Brian’s Song are fine for what they are, but lack the grit of Gent and Kotcheff’s work.