Dancing in the Streets

On In the Heights (A) and Revolution Rent (B). 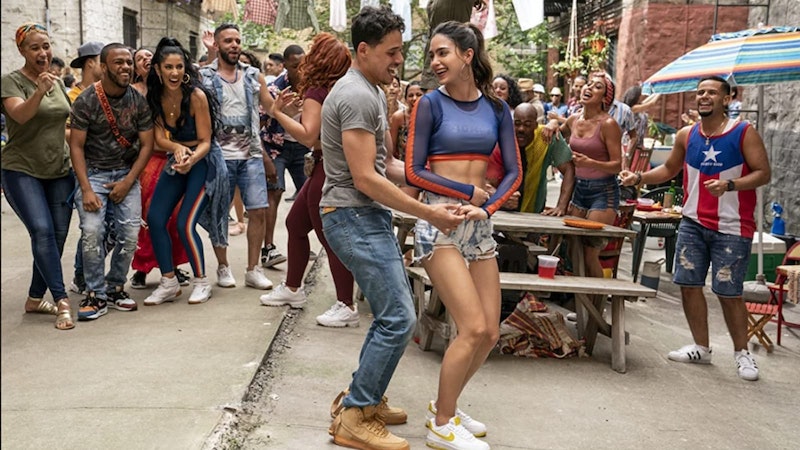 In the Heights, the first of Lin-Manuel Miranda's Broadway musicals, wasn't nearly as significant a phenomenon on stage as Hamilton, which followed a few years later. But the movie version of In the Heights, finally out this week, blows way past the filmed-play Disney+ version of Hamilton.

Directed by Jon M. Chu, In the Heights opens the Tribeca Film Festival this week, before landing in theaters and on HBO Max. It's a colorful and joyful celebration of a particular New York City neighborhood, brought to life by an unheralded but talented cast. Written and developed by a then-unknown Lin-Manuel Miranda, from a book by Quiara Alegría Hudes, the stage version of In the Heights landed on Broadway in 2008. It was an exuberant musical tribute to the creator's home neighborhood of Washington Heights, exploring themes of gentrification, identity, social mobility, and immigrant dreams, while also sprinkling in singing, dancing, and romance.

The movie’s much the same. Anthony Ramos stars as Usnavi, a young Dominican-American who runs a bodega on a rapidly gentrifying block in Washington Heights. Planning to move back to the Dominican Republic to run his late father’s old beachside bar, Usnavi is in love with Vanessa (Melissa Barrera), a luminous aspiring fashion designer. The secondary couple, in the musical theater tradition, is Benny (Corey Hawkins), the head of a dispatch, and Nina (Leslie Grace), who got out of the neighborhood for a prestigious college on the West Coast.

Ramos, who played a small part in the stage and movie versions of Hamilton, anchors the movie ably, while Hawkins, best known for playing Dr. Dre in Straight Outta Compton, proves an adept singer and dancer. The two female leads, Grace and Barrera, are nearly completely unknown, but you’ll be seeing a lot more of both of them. Most of the better-known cast members (Miranda, Marc Anthony, Jimmy Smits, Daphne Rubin-Vega) are in smaller roles, while the other standout part is Olga Merediz, reprising her stage role as the “Abuela” of the neighborhood.

Miranda, who played the Usnavi part on stage, acknowledges that nearly 15 years have passed and he’s too old for the role; he instead plays the small role of a street vendor. The movie also isn’t really set during any particular time period, although references to "Dreamers" seem to place it somewhere in the Trump era, give or take a year or two.

The musical numbers are a particular highlight; there’s not a bad one in the movie. The one set at a public pool, in which the characters share their lottery dreams, is my favorite, as is Abuela’s show-stopping number. Chu also directed Crazy Rich Asians, and In the Heights is another film that expertly deploys tablets full of beautiful colors. The best American film of the year to date, In the Heights may compete for awards this year with another Spanish-inflected, New York-set musical that was delayed from 2020, Steven Spielberg's West Side Story remake.

About 15 years before In the Heights hit Broadway, there was Rent, another musical that brought multiculturalism to Broadway when it was dominated, as an old theater professor of mine used to say, by "revivals, and Andrew Lloyd Webber." Time hasn't been kind to Rent, especially as Gen Xers have grown up, gotten jobs, and realized how silly it was that the show was built around a couple of bougie assholes who felt like they were entitled to not pay rent.

Now, as Rent marks its 25th anniversary, there's a documentary called Revolution Rent, which hits HBO and HBO Max on June 15, and details the first production of Rent in Cuba. Revolution Rent has a compelling hook: It follows Andy Señor Jr., the Cuban-American actor who played Angel in various companies of Rent, and his staging, in 2014, of a production of Rent in Cuba. The performance, which came during the brief, Obama-era opening to Cuba, was the first staging of a Broadway musical in Cuba since the revolution.

There were hiccups along the way. The actress playing one half of the show’s lesbian couple wasn’t comfortable with kissing another woman. Most performers in Cuba weren’t familiar with either traditional musical theater or the rock musical style of the show. The chorus of the show’s most famous number, referencing "525,600 minutes,” had to be translated into Spanish, in a way that worked with the rhyming scheme. Most intriguingly, Señor mounted the production against the wishes of his anti-Castro Cuban exile parents.