Can I Hit That? 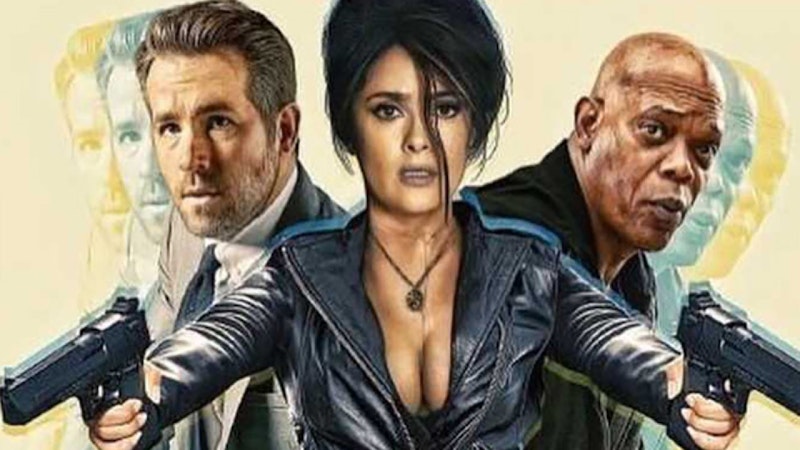 The Hitman's Bodyguard, from the summer of 2017, was an action comedy that enjoyed at the time, although I've had little occasion to think about it since. The film, directed by Patrick Hughes, followed most of the beats of the traditional body-cop genre, except neither character was a cop. It starred Ryan Reynolds as a down-on-his-luck elite private bodyguard, and Samuel L. Jackson as a famed assassin. The film followed the two of them around several European capitals, as they bantered, bickered, and a lot of stuff exploded all around them.

Now, four years later, the group is back for a sequel, Hitman's Wife's Bodyguard, with a title that's missing a "The" for some reason. It’s more of the same—a lot of laughs and reasonably strong action, but also forgettable. One of the highlights of the first movie was a brief foul-mouthed turn from Salma Hayek as Sonia, Jackson's con artist fiancéé. In the sequel, her role has been beefed up. A few years have passed, and Michael Bryce (Reynolds) is still smarting from losing his license to practice bodyguarding. Sonia eventually seeks him out to rescue Jackson's super-assassin Darius, and the three are soon on the run throughout Europe.

Hayek is again a highlight, a criminal who spends most of her time on screen either swearing, screwing, or shooting people. As for Reynolds and Jackson, this won’t go down as a highlight on their resumes, but their bickering remains amusing. Jackson’s in many movies these days where he spends much of the running time berating a younger foe—that’s what the most recent Shaft reboot was almost entirely about—but that formula is better executed in his movies with Reynolds.

After the first film starred Gary Oldman as the war criminal dictator of Belarus, the sequel’s villain (Antonio Banderas) also offers a half-hearted hint of geopolitical intrigue: the character Aristotle Papadopolous is a gangster who’s a Greek ultranationalist. His evil plan involves destroying Europe's electoral grid as revenge for the EU's sanctions on Greece, while in the process restoring his homeland to cultural dominance. But if you're afraid that's too dry a motivation, don't worry; Banderas' very specific political grudge is laid out in detail in one scene and then never mentioned again. He's also not enough of a Greek nationalist that he's bothered to do a Greek accent.

The film has an overstuffed supporting cast, including an appearance by Richard E. Grant that lasts for less than 10 seconds. Frank Grillo appears to be starring in an entirely different movie as an intense Boston cop who for some reason has been transferred to work for Interpol in Europe. There's also a great gag involving Reynolds' father.

What’s unfortunate in this film is an over-reliance on shaky-cam in the action sequences. The first movie had none of that, but the sequel has it in spades, with Terry Stacey stepping in as cinematographer, replacing Jules O'Loughlin. This isn’t the greatest ongoing action franchise. It doesn’t have the pedigree of the James Bond or Mission:Impossible films, nor is it as inventive in form as the John Wick series. But the Hitman’s Bodyguard movies are full of laughs, and the more Salma Hayek, the better.