Jon Stewart's Irresistible is a dud, 15 years too late. D 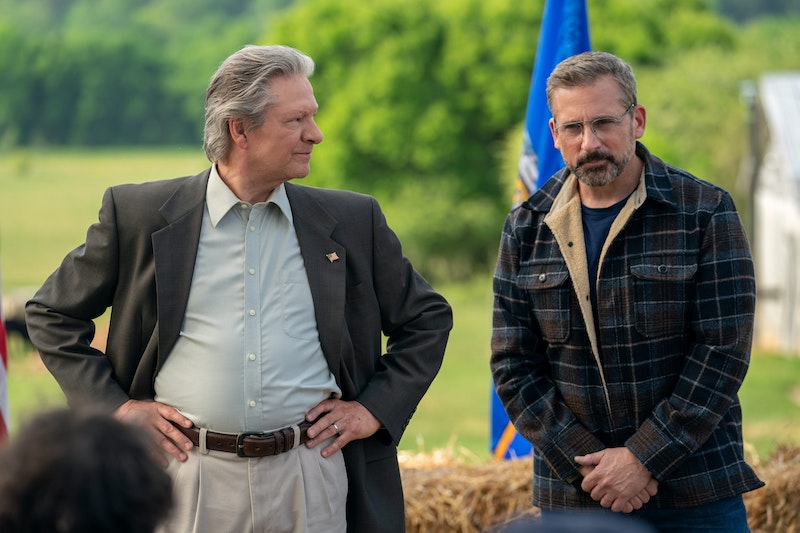 Say what you will about Irresistible, the new political satire written and directed by former Daily Show host Jon Stewart, but I'll give it this: It's bad in an entirely different way than its trailer made it look.

The movie appeared, from the preview, to be the latest in a long line of failed efforts by comedians to confront the Trump era, from both-sides political satire movies like The Oath, to 1000 columns by Andy Borowitz or musical videos by Randy Rainbow. The kind of material geared towards telling resistance liberals, with minimal effort, exactly what they want to hear.

Irresistible, which arrives on VOD today, is terrible.

Stewart, a man once thought to have his finger on the pulse of American politics, has emerged from an extended sabbatical to make a fiction feature that makes the following three points about American politics in the Trump era: There’s too much money in politics, big-time Democratic political consultants are elitist and out of touch, and too much attention is paid to the significance of one-off special elections.

All of those points are true. But none of them are funny, and it's not clear why they had to be the focus of a feature-length political satire, especially at a time when there are much bigger fish to fry in terms of mockery.

It's also another satirical political film, like The Oath and The Hunt before it, that has at least as many points to score against anti-Trumpism than it does against Trumpism. The director seems to have adopted the Glenn Greenwald-style position that rather than the countless abuses of power by the administration in charge, what’s worth getting angry about is that the bureaucrats in the DNC are jerks.

Irresistible seems inspired by the fish-out-of-water comedies of the 1980s. Steve Carell stars as Gary Zimmer, a big-time DC political strategist and MSNBC fixture who it's implied was a higher-up in Hillary Clinton's losing 2016 campaign, the one that infamously lost Wisconsin after the candidate never visited.

When he views a viral video of retired Marine Jack Hastings (Chris Cooper) giving an impassioned speech about the rights of immigrants, Gary has the idea to get Hastings to run for mayor of his depressed Wisconsin small town. Eventually, a Kellyanne Conway-like Republican strategist (Rose Byrne) lines up behind his opponent (Will Sasso), and before long it's a small town proxy battle for the soul of the nation—one that gets more money and national media attention than small-town mayoral elections typically do.

Carell’s character recalls James Carville, with all the amorality but none of the colorful personality. Gary’s out of place in a small town, right down to not knowing how to talk to people or order in restaurants. It's not clear why a veteran political consultant would know so little about Wisconsin—wouldn't a guy of his stature have run a senate race or two there before? And his relationship with Byrne's character is taken up by raunchy banter that's about 180 degrees away from the tone of every other aspect of the movie.

We're also introduced to an "analytics" team that isn't as smart as they think they are, led by Topher Grace as a Nate Silver stand-in, and there's some half-hearted satire of cable news as well. Between Irresistible and Netflix’s abysmal Space Force, Carell's really on a losing streak when it comes to political satires that don't work as either politics or satire. Both Space Force and this movie often resemble Veep, except without any laughs.

This isn’t the first time Chris Cooper has played a political candidate in a mediocre satire set in Middle America. That was Silver City, from 2004, which starred Cooper as a George W. Bush stand-in running for governor of California. The vibe of Irresistible feels left over from the mid-Bush era, when some Democrats argued that donning flannel, shooting guns in commercials and becoming "NASCAR liberals" was the path back to the White House. Cooper’s fine, but the considerable talents of Mackenzie Davis are wasted in a thankless role as Jack's daughter.

Despite the Stewart-era Daily Show's extensive history of mock-the-yokels humor, this movie’s set in a world in which a nearly all-white town in rural middle America is full of generally good-hearted people and there's virtually no mention of racism or anti-immigration sentiment. Cooper’s introduced giving an impassioned speech about immigration—an issue that never comes up again. This is a massive disconnect from the politics of the real world today, and that would be the case even if the film weren’t arriving on the heels of the George Floyd protests.

Also mostly absent is Donald Trump—he doesn't dominate political discussions here the way he does in real life. For all the years Jon Stewart hosted The Daily Show, his role in politics was often misunderstood. He was there to make liberals laugh, and to reassure them during various dark days, especially in the Bush-Cheney years. What he wasn't there to do was help Democrats win, or actually defeat Republican opponents. All the times that he, Stephen Colbert or John Oliver "eviscerated" Mitch McConnell or Trump, it certainly made the show's audience feel good—but neither McConnell nor Trump was actually eviscerated.

Give Stewart credit, I guess, for making a movie that skewers his biggest fans. But it's still disappointing that he's made a movie that's so obvious and so devoid of laughs.