Da 5 Bloods: It’s Like Nothing You Haven’t Heard Before

The Bloods know all of Marvin Gaye's pretty songs, but they don’t know what they mean. C- 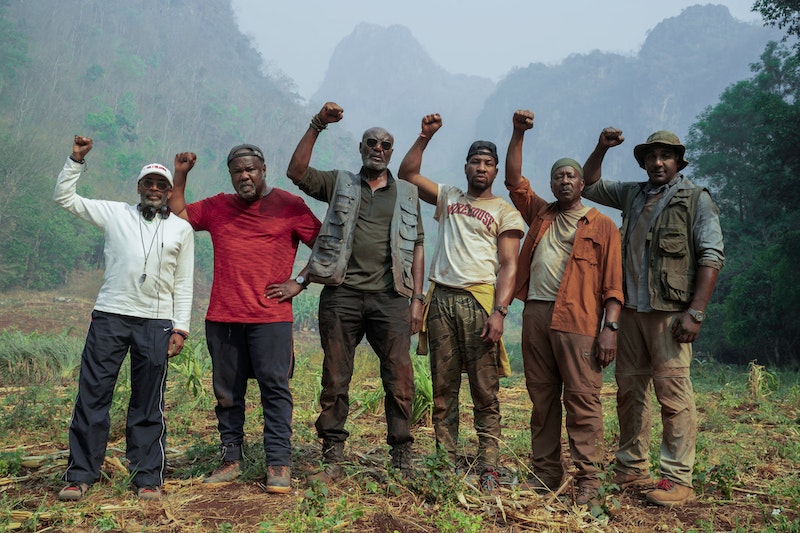 It’s extremely difficult for any work of art to succeed as a universal statement; a good story has to simultaneously contain enough specific details to be a believable lie, and enough broader significance to make us rethink the general experiences of large populations. But I never would’ve expected Spike Lee to stoop to the tricks he deploys in his new Netflix movie, Da 5 Bloods, all of which he uses in the name of his film’s Broader Significance, and its Important Message Especially Right Now. It’s standard for a film to end with captions that describe what happened to a particular character later on. But is it standard to end with a caption about the assassination of Martin Luther King when the film isn’t about Martin Luther King? What sense can the viewer possibly make of that, regardless of the emotions it triggers? I’m hesitant to denounce Lee’s movie when its heart is in the right place. But I think he would rather be remembered as a great artist, who directed Do The Right Thing and 25th Hour, than as the great sentimentalist he’s content to be here.

I cried at several points during this movie, including during an outstanding scene that depicts a chapter of Black Lives Matter getting a hard-won donation for millions of dollars. But that’s a questionable recommendation. First, if you simply hand Morgan Freeman a copy of “The Gettysburg Address,” and have him read it aloud to a montage of old photographs, I’ll probably cry a little. Moreover, it’s possible to cry resentfully, aware that you’re being manipulated by a bunch of professionals who know how to do a lot with very little. Da 5 Bloods includes an extended voiceover that contains a father’s last words to his son. In the moment, helped by a stirring score by Terence Blanchard, the letter felt very affecting. But an hour later, I could hardly remember anything that was in it, aside from a few lines that were embarrassingly out-of-character and straining too hard for effect. For instance, the son’s mother dies in childbirth, but the father writes that she’ll “love him forever.” That’s just one example of the letter’s cold comforts; it’s a poor set piece from beginning to end, and it’s one of several balls that Lee only manages to keep in the air while there’s still more film left that we have to think might, somehow, justify everything we’ve seen. When the film ends, though, nothing it has said goes beyond what you’d expect of a high-budget rendition of Black Lives Matter: Live!

Imagine if every film used real photographs and documentary footage. Winter’s Bone, with Bernie Sanders spliced in. El Norte, with pictures of actual migrant workers, and grainy videos of Cesar Chavez and Dolores Huerta. Children of Men or V For Vendetta ending with a caption about the Patriot Act. Obviously there’s one artist who got away with this exact technique constantly: Charles Dickens. But not everyone can or should try to imitate Dickens, and Dickens was a writer, not a filmmaker. It’s more disruptive to include fragments of the Real in a film, because there’s no omniscient narrator there to account for the asides about All of Poverty Throughout England. Other films have also already done what Lee is trying here, robbing him of even that claim he might make to originality. Up in the Air, during its end credits, replays actual voicemails from laid-off workers victimized by The Great Recession. (A film like The Big Short goes even further in the same direction.) But that’s a gentle intrusion, unlike the still shot of Aretha Franklin that juts into Da 5 Bloods just because her name gets mentioned.

During a tense scene between the “Bloods” and the native people of Vietnam, Lee does splice in photos of the My Lai massacre and other atrocities that the Vietnamese still associate with the “American War.” I briefly thought this was going somewhere vital; I thought Lee might be making a subtle point about the way historical narratives intrude on the present day and re-inflict old wounds. I even thought Lee was hinting at the way oppressed or traumatized people sometimes carry around simplified narratives; their poster-boys and points of reference are sometimes symptomatic of their voicelessness. But by the time the movie rolled around to King—destroying, incidentally, the beauty of an earlier scene set at the historical moment of King’s death—I was pretty sure that Lee didn’t have anything subtle in mind. When I tried to discuss the film with a friend recently, she immediately brought up the opening clip, which is a statement about racism and Vietnam by Muhammad Ali. She was right to do that, but it’s frustrating to watch a film that supplies the audience with talking points and analogies, as though they aren’t bright enough to sleuth out such things by themselves.

What are we supposed to do with the film’s derivative moments? It’s bad enough that Isiah Whitlock, Jr. says “sheeeeeeeeeit,” a catchphrase he first unveiled in 25th Hour and then honed in The Wire. The bigger problem is that the entire film rips off Three Kings and The Treasure of the Sierra Madre with gleeful abandon. Again, as with the interpolated photographs, there was a certain phase in my viewership of Da 5 Bloods where I thought this was both intentional and thoughtful. I imagined that Spike Lee might have something interesting to say about wealth in the black community, and the divisions that wealth creates, or something metaphorical in mind about the “gold” of brotherhood that these men discover “buried” in Vietnam. Obviously, such interpretations aren’t complete dead-ends, but even the most dedicated viewer will have a hard time following the metaphors when so much is obscured by the specifics of a story we’ve heard, many times before, in contexts completely unrelated to BLM and the struggle for civil rights.

Oscar Wilde once wrote that “One must have a heart of stone not to laugh while reading the death of little Nell.” I felt the same way about one of “da 5 Bloods” blowing up. He’s trying to say, “My momma taught me that money is the root of all evil,” while shaking a gold bar at his friends. Instead, he steps on a landmine and explodes. The unintentional hilarity gets worse when he’s living out his final moments without arms or legs, blood squirting operatically out of his shoulders. His expression seems to say, “I guess Spike Lee didn’t want me to get into a discussion about the root of all evil.” The rest of his body, including the way the shot is framed, makes him look like the Black Knight from Monty Python and the Holy Grail: “Come back here! I’ll bite your legs off!” Perhaps this is Lee’s way of gaining the upper hand in discussions about what the film means—don’t say it’s about the corrupting power of gold, or I’ll blow off your legs!—but it’s made senseless by the reappearance of Mr. Fifth Blood (Out Of Five) at the end of the film, where he’s smiling like he’s never gonna be puréed by unexploded ordnance.

At that point I was openly crying. “You know, he was right after all, money is bad,” I said to my wife, who sniffled and nodded. “And so are landmines,” I added, out of respect for the people of Southeast Asia. Then, when the Black Lives Matter scene came on, I said, “You know, he was right after all, those groups do need millions of dollars.” Again, my wife tearfully agreed. Yet I could tell something was bothering her. Meanwhile, Spike Lee was spinning up yet another track from the 1971 album What’s Going On, by Marvin Gaye. Da 5 Bloods know all his pretty songs. And they like to sing along. And they like to shoot their guns. But they don’t know what it means. The Bloods leave the jungle bearing the same unexamined slogans they packed in. And despite all your well-wrung tears, you’ll never escape the feeling, as a dues-paying member of Lee’s sympathetic audience, that you’re merely treading water too.