Masters of Sex Is Well Worth the Slow Build 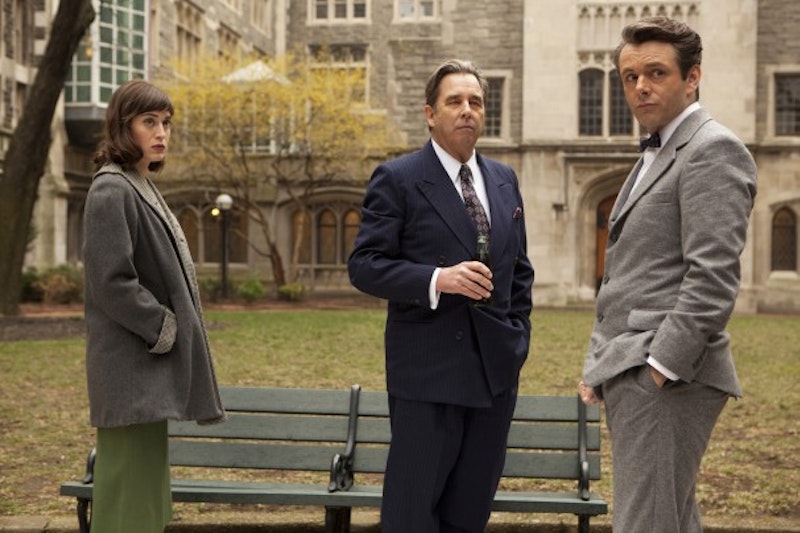 A few nights ago I was re-watching a few episodes of The Wonder Years—a Nick at Nite classic that, like Wings and Cheers, I have fond memories of watching with my parents in the early 90s—when I was struck by a particular joke. Craig Hobson, one of Kevin's classmates, has brought a men's magazine to school with him, and is proudly showing it off to Kevin and Paul in the cafeteria. Paul tells him to put it away, and Hobson tells him there's nothing wrong with it: "I don't want this to come as a shock to you... but men look at women. You're just a babe in the woods." The narrator's voice cuts in: "Craig Hobson: the Masters and Johnson of the lunch line."

I wouldn’t have gotten this joke if I hadn't just started watching Showtime's Masters of Sex, a historical drama about the pioneering sex research of William Masters and Virginia Johnson. The two, I think, have been somewhat forgotten in favor of Alfred Kinsey, though no doubt the recent interest in Kinsey—including the success of the 2004 feature film starring Liam Neeson and Laura Linney—has a lot to do with Showtime running this show at all.

Masters of Sex stars Michael Sheen and Lizzy Caplan, with some fine supporting work from Nicholas D'Agosto, Beau Bridges (who's on TV a lot these days) and Allison Janney. The show's a bit of a slow build; there's a whole lot of character introduction and backstory in the first few episodes. William Masters is a codgy gynecologist, whose research into the physiology of sex involves paying a local prostitute to let him hide in her closet and take notes on her "appointments." When she admits to faking her orgasms, Masters is baffled, and the prostitute suggests he may need an assistant, someone a bit more practical—"If you really want to learn about sex, you're gonna have to get yourself a female partner." So, along comes Virginia Johnson, a hospital secretary, twice divorced, with two kids, who—in 1956—is a bit of an early sexual revolutionary, having flings with young doctors, and if there's any easy comparisons here it's to Mad Men, that great deconstructor of 50s values.

Still, for a show about sex, the early episodes were decidedly unsexy: Masters and his wife sleep in separate beds, and though she's desperate to have a baby, Masters refuses to tell her that he's all but infertile (that part's not so historical, by the way). Meanwhile, Johnson has sex with Master's protégé, Dr. Ethan Haas, and though she's determined to keep things casual, Haas is in love; a drunken fight that ends with Haas slapping Johnson across the face ends that romance.

And while Masters' attempts to persuade the provost, Barton Scully (Bridges), of the importance of his research were all well and good, it wasn't until MoS turned its attention to the provost's own marriage that the show really got my attention. Masters learns that the provost is gay, and that his marriage to Margaret (Janney) is a sham. He uses this to his advantage, securing academic funding and recognition for his study, and Margaret, hearing news of the study from a friend, and realizing—by reading Peyton Place of all things—that her sexual life with Barton has been somewhat less than satisfying, decides to experiment a bit. Though she's excluded from the study (because she's never had an orgasm), she has sex with another young doctor, Austin Langham, who's been having his own frustrations (and his Freudian therapy isn't much helping).

At Vulture, Margaret Lyons argued much the same point: MoS "spends a lot of time exploring and explaining the mechanics of sex, the what goes where and how and for how long, and that's by far the least interesting part. We see a lot of nudity and a lot of sex. When everyone gets dressed and tries to go about their day—that's when the show gets really exciting." And while I never quite trust Showtime shows, what with all their executive meddling, so far MoS is well worth it.