Bravo's cooking show, even in its supposedly lackluster fifth season, is enjoyable because it shows people doing what they actually do in real life. 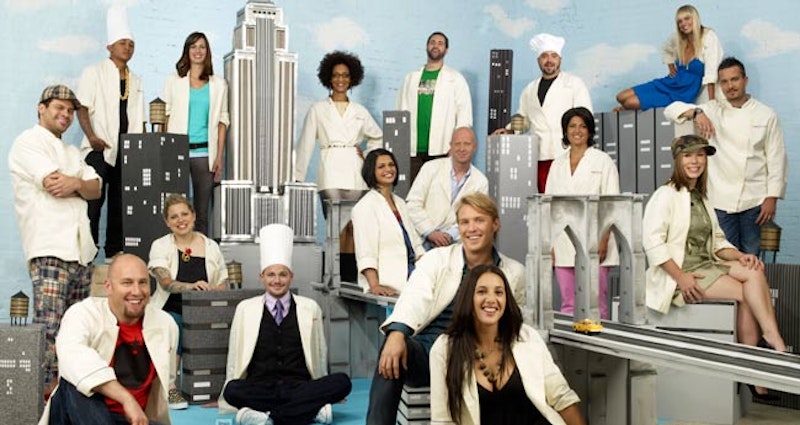 Except for the fact that one of the cheftestants, Ariane Duarte, owns a top-rated restaurant near my hometown, there was nothing especially unique about Top Chef’s season five contenders that drew me to the TV on Wednesdays at 10 p.m. While anticipating priceless lines like “This is Top Chef, not Top Pussy” from fan-favorite Fabio Viviani was entertaining, veteran followers of the show complained that season five was quite dull compared to seasons past. Regardless, a couple of fundamental aspects captured the interest of a rookie, anti-reality TV viewer like me.

First, Top Chef features hard-working, talented people and not just those that are hot and dumb. Though one might make the same argument for a show like American Idol, on Top Chef you never have to go through those awkward moments to get to the real talent. There are no William Hungs on Top Chef—all cheftestants have proven their culinary expertise prior to filming, and the result is more sophisticated and heightened competition.

Second, the show is primarily focused on how well cheftestants perform in the kitchen individually and not on their catty interaction with the other contenders. The majority of Top Chef footage depicts qualified professionals doing what they do every day but under more pressure. During monologues, the competitors mostly discuss their unique cooking styles and the ways they dealt with stressful challenges in the kitchen, meanwhile keeping the chef bashing of others to a minimum. Since viewers are familiarized with the cheftestants primarily through their explanations of how they approached various culinary challenges, we gain a truer understanding of how these chefs are in “reality” rather than getting to know them through footage of the premeditated drama that results from forcing eight polar-opposites to live under one roof, a la The Real World.

Another outstanding aspect of Top Chef is that head judge Tom Colicchio provides insight and give transparency to the judges’ decision-making processes through his dutiful, explanatory blog posts following each episode.  In his writings about season five, Colicchio admits that when no one was eliminated during the Christmas hors d'vores episode, it was not because the judges were feeling “in the spirit o the holidays,” as they claimed. Since the refrigerating systems broke down and rendered Radhika and Josea’s meat unfit for consumption, the producers decided it would be unfair to penalize them or any of the chefs that helped mitigate the crisis, so the judges informed everyone their dishes more or less sucked but no one would be packing their knives.

However, despite Colicchio’s helpful and seemingly honest blog, some evidence suggests that Top Chef’s judging process is not immune to the inevitable conflict between sincerity vs. the need to retain viewers. There were several instances when elimination decisions were downright fishy, and I don’t mean Jamie’s seared scallops or Eugene’s deep-fried sea bass. For instance, on the “Last Supper” episode, was it any coincidence that the beloved Fabio broke his finger during the challenge and later ended up being the winner? It’s a tough call because his Italian-style chicken did appear appetizing, but many clips showed him dropping half-peeled potatoes on the ground and haphazardly chopping chicken with a flailing knife as he struggled with the use of just one hand.

As for the loser of this challenge, it seemed certain during the pre-elimination discussion that cocky Stefan would be sent home as all the judges unanimously agreed they hated his overcooked salmon. Hailing from Finland, Stefan was one of two Europeans on the show determined to be the first foreigner crowned Top Chef. Stefan had a lot of entertainment value because he was the Dr. House of the show—the most talented, but collectively loathed for his arrogance and total inability to work with cooperatively with others. When it was announced Leah would be eliminated for her runny eggs benedict, it appeared the judges were breaking their own rule by taking Stefan’s spectacular past performances into account and discarding the uninteresting Leah who coincidentally had a brief romance of sorts with Josea that had fizzled episodes ago.

That said, the reason Leah even made it as far as the “Last Supper” is again suspect. On the “Restaurant Wars” episode, which filmed the morning after Leah and Hosea’s scandalous smooching sesh, Leah was a designated team leader and according to the judges, made the worst dish of the entire evening. Her team was saved allegedly because of Stefan’s dessert and Fabio’s performance as head of house, but one can’t help but take into consideration that her drama with Josea made her continued presence on the show valuable in an entertainment sense. The judges sent Radhika home instead, and yes Radhika sucked as a hostess but maybe she wouldn’t have screwed up if she wasn’t so worried about the dessert that Carla “hoodie hoo” Hall from D.C. completely botched.

Speaking of kooky Carla, the fact that she had such a long run is another indicator that something is awry with the judging. Disregarding the fact that she admitted to being unable to cook a plethora of things throughout the season, she defended the poor-quality dessert she bungled during “Restaurant Wars” by saying the dumbest thing any self-respecting chef could say: “I sent it out with love! I sent it out with love and hoped for the best!” I couldn’t believe Padma didn’t send her home immediately.

The ever-charismatic hostess Padma Lakshmi is another interesting part of the show. A striking glamazon, Padma is the exotic keystone that a show about stressed-out, sweaty chefs requires to be viable in today’s popular culture. Padma’s presence is overpowering as she calmly walks into the kitchen sporting some hot, skin-showing outfit to instruct the frumpy group. Her slow, breathy voice somehow manages to be both soothing and suspenseful as she utters, “please pack your knives and leave” at each episode’s end. However, while she is the integral hotness, Padma’s background as the self-described “first well-known model from India” and a hostess of two other Food Network programs seem to be hardly sufficient credentials compared to former chef Colicchio, British food critic Toby Young, editor of Food & Wine Gail Simmons and the myriad trend-setting, culinary masters that guest judge. For a show where viewers must have blind faith in the judges’ gestation, it’s hard at times to trust the elegant yet under qualified Padma’s opinion, given she’s admitted that her vegetarian upbringing causes her to be "squeamish" sometimes about trying out new foods and she has no real experience in the restaurant industry.

The biggest problem but also the most intriguing aspect of Top Chef is the fact that everything is essentially about taste. On all other elimination shows, viewers experience exactly what the judges experience. On dating shows where hopefuls avoid elimination by competing for the affections of "heartthrobs" like Flavor Flav or Bret Michaels, we get to know potential partners right along with the show’s B-list celebrity star. On performance-based shows like American Idol or Dancing with the Stars, we observe the same routine as the judges for better or worse. But on Top Chef, where judgments are made almost entirely on taste, we must fully trust the palettes of Colichio, Lakshmi and the guest judges. Given that taste is such an individual, sensory experience shaped by cultural influence and personal experience, it is no surprise that judges often disagree with each other what they like.

Nevertheless, Top Chef is commendable for it’s talented, lack of senseless drama and the positive visibility it gives to up-and-coming chefs from around the world. Josea was crowned Top Chef and may have taken home the $100K for his restaurant, but Fabio is endorsing a pizza brand and may be getting his own show. While I’d say that America would be a better place if ridiculous shows like Millionaire Matchmaker, The Real Housewives, Rock of Love, and True Beauty ceased to blight the airwaves, Top Chef is designed to help legitimate people have successful careers. I hope it stays on the air for a long time.