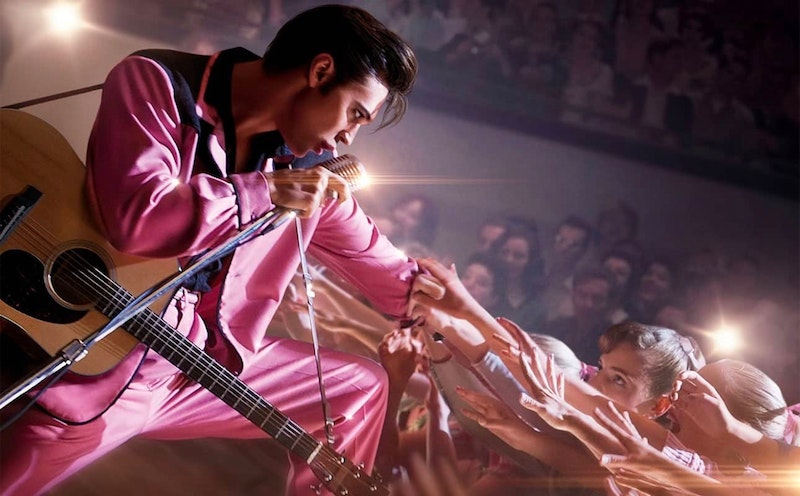 2022 was the first full year of theatrical moviegoing in the United States since the start of the pandemic. It’s easy to forget now that 2021 had no first half, just as 2020 never existed, even as it was happening. Without word of mouth or a truly central streaming organ, movies come and go, as if they always existed, taken for granted and dismissed as soon as they’re released. Television’s too fractured and abundant to ever grow as big as the movies once were, and although theaters still stand, they’re rarely packed. Most matinees I saw as a child, teenager, and through most of my 20s were packed with people. I remember waiting in line for an hour to see Dreamcatcher at the UA Union Square 14 in the spring of 2003, a forgotten Stephen King adaptation that played in its first run with a segment from the upcoming Animatrix. I waited in the best seats at the same theater for 45 minutes before the first two Harry Potter movies. I Heart Huckabees, a flop in 2004 that’s somehow gained a cult following, sold out the Charles Theater on a Sunday afternoon. The only audience I saw anywhere close to any of these routine matinees was the crowd at Top Gun: Maverick at the Senator Theater last May. It was great to see such a beautiful movie palace packed again, even if it was Top Gun: Maverick.

None of the fall and winter movies that bombed had mass appeal anywhere near Tom Cruise’s mega sequel or even last year’s Licorice Pizza, a movie that could’ve been a masterpiece and merely ended up being very good. But that bombed, too: another coronavirus wave—the first one to hit me—was the only explanation, besides the fact that Paul Thomas Anderson has never had a hit. But on paper, his memory movie sounds far more appealing and popular than the decidedly more square outlooks of James Gray and Steven Spielberg. I liked a lot of movies in the second half of the year, and many are on my list, but this was not “a season of healing” as Jada Pinkett-Smith promised. Almost everything in theaters for the last six months, blockbusters aside, has been relentlessly bleak or “difficult” for different, obvious reasons: Babylon, with those trailers, at 199 minutes? Ditto for Spielberg’s youth chronicle leading right up to his ascension to cinematic Mount Olympus—something everyone can relate to. The Whale is a small masterpiece, and it’s doing a lot better than some of the other movies on this list, but there’s no denying it’s a miserable piece of work, like The Banshees of Inisherin and Todd Fields’ aggressively arty—for American “arthouses”—Tár, a film targeted at the exact demographic that hasn’t returned to movie theaters. I hope it doesn’t look as bleak this time next year.

1. The Whale: Darren Aronofsky’s best film since Black Swan, and the performance of a lifetime from Brendan Fraser. Everyone in this movie is cruel and angry because they love someone who’s killing themselves and doing it nicely. A film of incredible power and grace that has confused almost everyone, confirming its own depiction of fat phobia in most people. This is a high-toned movie with almost no jokes and some moments you could easily pick apart and laugh at like any melodrama, but I’m amazed by how few people have seriously engaged with this movie beyond dismissing it because of Fraser’s appearance, whether because they find it offensive, silly, stupid, or miserable. This isn’t a film about fatness, it’s about suicide, one which presents two sides of a good argument, like all great films should.

2. Elvis: Glamorama! Hyperkinetic cinematic spectacle that felt like doing a ton of pseudoephedrine. A thin, silver sound made into image and blown up to two hours and 45 minutes, featuring another lifetime performance from Austin Butler, and an unfairly maligned Tom Hanks turn as Colonel Tom Parker. He’s hamming it up as much as director Baz Luhrmann, who actually made a movie as if the “end of cinema” was nigh—this movie has fucking everything! Sort of a mess, but nachos are a mess, no?

3. The Batman: The best superhero movies since Sam Raimi’s Spider-Man trilogy, and really the first time I felt satisfied walking out of a superhero movie. And I don’t even particularly like Batman—Christopher Nolan’s trilogy bored me, and I never read the comics, unlike Spider-Man and most other Marvel series. But Matt Reeves’ three-hour film of The Batman felt like reading a bound 12-issue collection instead of a teaser for the inevitable trilogy, which even Raimi’s movies felt like. This Batman movie had half a dozen major characters, subplots that colored the movie and never felt unnecessary, and most of all, had an aesthetic approach that correctly identified Bruce Wayne as a Nirvana fan in 2022, an orphan whose parents were killed right around when Kurt Cobain died, too. “Something in the Way” is the theme of this Batman, and again, this is another movie that isn’t ashamed of itself, and is willing to make moves that you could easily laugh at. It’s not too silly for me; this is exactly what a comic book movie should feel like, not Reds.

4. Ambulance: I saw this in an empty theater in April and loved it. I loved it just as much in a Los Angeles hotel room a few months later, and I’m not sure why it bombed—bad advertising? Might’ve worked better in the summer? Michael Bay’s latest is a self-referential simple genre movie about a bank robbery gone wrong: two main thieves carjack an ambulance and drive it throughout Los Angeles, devastating the city everywhere they go. This is a relentless movie with zero breaks, even before the botched heist. Bay’s cutting style, music cues, and sound effects are disorienting and dizzying on a small screen in a small room, but big? Ambulance is a riot.

5. Catherine Called Birdy: Lena Dunham, like Claire Denis and Ti West, put out two films this year. This should be the standard! Instead, they’re role models: movies should come more frequently and faster, and cinema should be able to respond to current events without a year or two- or three-year gap in between. There should’ve been Harvey Weinstein movies made and released before Christmas 2017. Look at Japan, where a filmmaker already made a movie about Shinzo Abe’s assassin. It was his first in six years. Movies must interact with the world around them. Dunham, unlike Denis and West, made movies in disparate genres: her sex comedy Sharp Stick was disappointing, but Catherine Called Birdy was a gleeful piece of sunny medieval mischief. This was the major key counterpart to Ottessa Moshfegh’s equally powerful but bleak beyond bleak novel Lapvona, which someone should make with as much verve and passion for the source material as Dunham did with Catherine Called Birdy. Bella Ramsey may already be known for Games of Thrones, but she’s a breakout star to me. I usually have a tough time with medieval stuff and can’t stand most fantasy, so I was surprised how much I liked this movie, starring a character that feels like Bart and Lisa Simpson in one, a beautiful combination.

6. Funny Pages: Owen Kline’s feature-length debut is a harried, realist portrait of ambitious youth hitting the ceiling of those very ambitions. What’s an aspiring cartoonist to do? Don’t go to college, move to New York City, find a disgusting “room” in a basement maintained by men generously described as creatures, the kind drawn by the main character in his own comics. Funny Pages isn’t funny as often as it’s harrowing, a realistic portrait of what it’s like to try to become a professional artist in contemporary America: grim.

7. The Banshees of Inisherin: Not as grim but just as weighty is Martin McDonagh’s followup to Three Billboards Outside Ebbing, Missouri, a movie I still don’t understand why so many people disliked. Banshees, once again, poses two sides of a good argument: is it better to live for posterity and one’s body of work or to live for yourself and your actual body, and your family and friends? A fairly common question faced by all artists at some point, one oddly not addressed very often in film, at least not at bluntly as McDonagh’s film. I can see not liking the style, but visually uninteresting? He’s no worse than Robert Altman at directing “play movies,” and despite taking place on a beautiful Irish island, Banshees is a play—but, like The Whale, I thought it was adapted with grace and restraint. This script didn’t need rococo camera work. This is a film that is comfortable being multiple things at once: funny, grim, gory, bleak, moving, sentimental, goofy, all without breaking stride. That’s rare, and McDonagh does it well.

8. Tár: It could’ve been a series! The first time I’ve said that. But Field is better served making widescreen images for big, wide screens, and while Tár suffers from compression—even at 162 minutes, it feels short and incomplete—it’s still the best looking American film of the year, by far. All of the memes and clips do the film a disservice, because this is a movie that is guided as much by Cate Blanchett’s performance as the camera. Too rarely, in an American movie, the camera is the star. Here, Lydia Tár shares the spotlight with 2:35 widescreen.

9. The Fabelmans: A perfect movie, but an undramatic life. A typical upbringing that led to the most successful filmmaker of the last 50 years, one who’ll go down in the pantheon alongside Alfred Hitchcock, and who else? I’m sure of him and Stephen Spielberg. The Fabelmans is immaculately crafted, but it lacks the imagination and grace of Amarcord—and frankly, its brilliance—along with the brilliance of other recent memory movies by Quentin Tarantino and Paul Thomas Anderson. Licorice Pizza was an imperfect movie, but I saw it three times. I don’t know when I’ll see The Fabelmans again. But what an ending scene and shot! Another movie that would’ve been packed at the Charles even four years ago.

10. Pearl: Ti West’s first film of 2022, X, was a limp and unsophisticated slasher exercise with zero thrills and zero set pieces. I remember almost nothing about the movie beside the ending, starring a decrepit old Pearl, played by Mia Goth along with the young aspiring porn star Maxine (the star of West’s next film, the third in this trilogy, MaXXXine). She’s falling apart, and it’s disgusting, and whatever West was trying to do or say didn’t work, like most of X. His rapid-fire prequel Pearl was so much more fun and limber, colorful and surprising and clearly the product of instant inspiration and creativity (West and Goth collaborated on Pearl after they were already in New Zealand shooting X). It’s a mix of surface level Douglas Sirk production design and lighting, horror melodrama elevated completely by Goth, and a dynamic structure totally at odds with the familiar and thoroughly boring slasher setup of X. In comparison, Pearl was a real original, the most unpredictable horror movie I saw this year.