Spaceship Earth is another stellar documentary by Matt Wolf about eccentrics and their relationship with a skeptical and malicious media. A 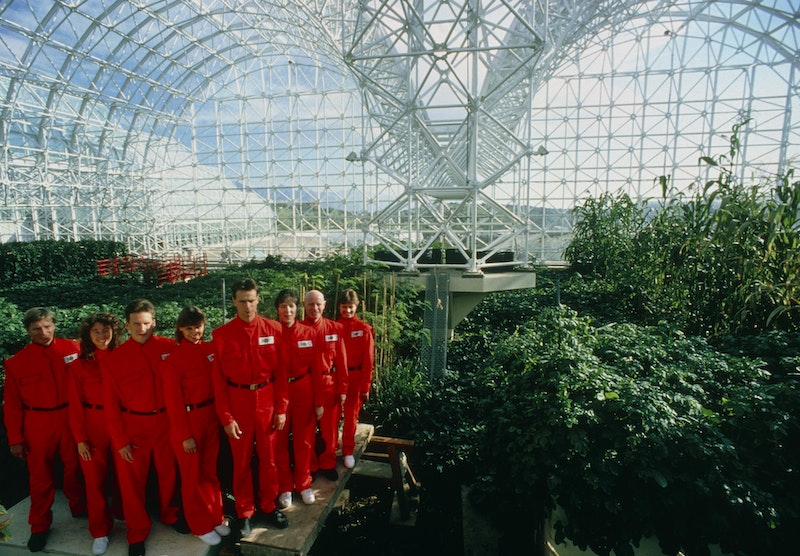 Nearly 30 years ago, Biosphere 2 opened and eight people went in and didn’t come out for two years. Emerging out of communes in California in the early-1970s, the group that eventually built the first (mostly) self-sustaining biodome on Earth. From September 1991 to September 1993, eight people, dozens of animals, and hundreds of plants and bugs filled Biosphere 2, outside of Phoenix, AZ. Matt Wolf’s new documentary Spaceship Earth charts the group from its origins through the saga of Biosphere 2.

Wolf tells the story of the group using a mix of archival footage (of varying quality), photos, and widescreen interviews with many of the main players. He does commit the cardinal sin of documentary filmmaking later on, though, by letting an interview run as the subject breaks down, can’t continue, and has to walk off. A move as clichéd and silly as the “slow clap,” luckily it’s the only real problem I have with Spaceship Earth. Another filmmaker would’ve covered a person like John Allen with more suspicion, less subtlety, and tried to play up the cult aspects and similarities with Koresh, Manson, and Jones. But Allen wasn’t a monster. He was just really fucking weird.

Wolf’s recent films—last year’s excellent Recorder: The Marion Stokes Project and Spaceship Earth, now streaming here—are about eccentric individuals and their relationship with the media. Marion Stokes, a reclusive communist who collected iMacs and recorded every TV channel every day 24/7 for 35 years, is a very different figure than John Allen, the typically charismatic cult leader of The Theater of All Possibilities (a theater company), the Heraclitus (a functional ship), and Biosphere 2 (a functional self-sustaining geodesic dome).

But Wolf treats them both, and the people that love and follow them, with a notable nuance and shading absent in most new documentaries. His interest in infinite possibilities and how suspicious society gets of those who dream big—like Allen and Stokes—make him one of the most consistently interesting American documentary filmmakers. His work is thoroughly political, but not like Errol Morris or Michael Moore, who always have predictable messages and conclusions. American Dharma, Morris’ latest, was essentially a feature-length interview with former Trump advisor, Breitbart editor, and triple-collared bandit of the right Steve Bannon.

What was so striking about American Dharma was how out of touch Morris appeared: after admitting he voted for Hillary Clinton over Bernie Sanders in the 2016 primary, Bannon is aghast. “How could you make The Fog of War in 2003 and vote for Hillary Clinton less than 15 years later? What are you thinking?” Morris didn’t have an answer, and when he finally stammers out a pathetic “I just thought it was the safest choice,” Bannon smiles and laughs in his face, shaking his head the whole time. Morris does not get it, and his subject loves it.

Bannon shows up at the end of Spaceship Earth, part of the corporate wrecking crew sent in to clean up the mess caused by John Allen. Hired by Ed Bass, he strips Biosphere 2 for parts, destroys their research, and moves onto his next venture.

(Bannon remaining in pop culture as a Zelig-like figure after being fired from the Trump administration is very funny to me—next time you watch Vincent Gallo’s The Brown Bunny, pay attention to the credits.)

The second half of Spaceship Earth, once the team of eight has entered Biosphere 2, focuses on their difficulties maintaining survivable carbon dioxide levels and the delicate balance of every living thing they brought in there. Crops that yielded more but tasted worse were grown—beet root soup every night. But these people signed up for this, and for the most part they loved it. Only when the carbon dioxide slips does the ecstasy fade.

Wolf, like Marion Stokes, uses contemporary news reports and media behavior to comment on the way eccentric and unusual people that dare to be different are always considered suspicious, dangerous, and sometimes killed or silenced. Nobody wanted Biosphere 2 to succeed, and in his naïveté, Allen hired a PR firm to handle the launch in September 1991. The team of eight was recorded by the media wearing unflattering Star Trek-style costumes purely for show, undermining their entire project for nothing. Every team member resented this.

But at the end, the surviving members of the group (only one is deceased) all say it was the adventure of their life. They only sadness is in Bannon and Ed Bass coming in after the experiment to strip the biodome for parts and chucking all of the research. The way these people lived together for two years, the way it affected them, their diet, all of that is gone forever. Stupid, stupid, stupid, but in the eyes of short-term profit corporate managers, it was of no concern.

I found Recorder: The Marion Stokes Project immensely moving because I identified so strongly with Stokes. Wolf’s latest is another great film, although less directly about the media, it’s as much a survey of the last quarter of the 20th century as Recorder. From The Theater of All Possibilities, through the Heraclitus, through Biosphere 2, we see the movement and growth of commune hippies—who never did drugs—not into yuppies, but earnest ecologists and environmentalists.

Biosphere 2 held the dream of the 1960s alive in its heart, and its members’ refusal to become yuppies (despite being admitted capitalists) is unique. The Grateful Dead were corrupted by corporate thinking, but these people? John Allen? They still want to go to space, and they’re not crazy.

That’s what makes Wolf’s films interesting: they’re about true individuals set against the backdrop of mass media, pop culture, and history. They have no political agenda or message other than that of the material itself. Marion Stokes recorded every TV station for nearly 35 years—why? John Allen and so many others wanted a new utopia on Earth—why? Neither answer is salacious or tragic. What a relief.