Last Chance Harvey surprises just enough to please, and at least Dustin Hoffman looks like he has a pulse. (Grade: B-) 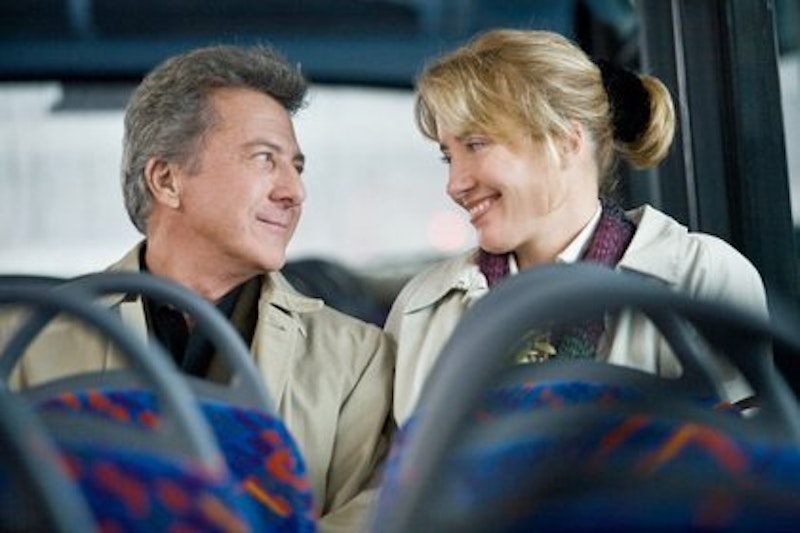 I can’t decide whether Last Chance Harvey is a good movie with bad aspects or a bad film with occasional redeeming qualities, just as I’m undecided as to whether the decision to film a romantic story about two (relatively) old people constitutes an admirable expansion of romantic-comedy conditions or just a middling effort by its aging stars. It would help if the writer/director, Joel Hopkins, seemed to know what kind of film he wanted to make. At times, Last Chance Harvey feels like a London-set whirlwind 24-hour romance—a Roman Holiday for the Viagra set. At others, it feels like a modest story of one man’s attempted redemption. Too often, like in the squirm-inducing scene where Emma Thompson is made to do a wacky-dress montage worthy of a B-rate Kate Hudson vehicle, it feels simply like a by-the-numbers romantic comedy for women who read O rather than Cosmo.

Dustin Hoffman plays the titular schlub, a jingle writer whose career looks bleak and whose imminently wedded daughter has asked her stepdad to walk her down the aisle. As a character, Harvey Shine is all too familiar and uninteresting: the sad-sack well-to-do white man who’s feeling a little dispassionately bummed. An actor as talented as Hoffman was 40 years ago could potentially make this cliché sing, but that actor hasn’t been with us for a while. Hoffman circa 2008 is more likely to wince and fawn his way through a role, a tendency that’s kept mostly in check here relative to his recent turns in disasters like 2006’s Perfume.

Harvey’s women fare better. Emma Thompson is naturally a delight, even if she’s more deserving of a classier era’s romantic comedy sensibility than the current vogue of awkward blind dates, supportive ethnic friends, and “It’s complicated” monologues, all of which she’s subjected to here. Kathy Baker plays Harvey’s ex-wife with a believable and affecting mixture of bitterness and nostalgia. But the true surprise is Liane Balaban, who imbues her underwritten role as Harvey’s daughter with an almost unnecessary amount of emotional realism for a script this fluffy. The scenes between her and Hoffman are the best in the film, not only because of their perfect physical casting, but because Balaban is so subtly expressive that Hoffman’s annoying man-child twinkle seems suddenly poignant in response. When he offers a hokey toast at the reception, saying that she’s grown up to be tough but remained sweet, her look of appreciation—and the fact that she never actually hates her dad; they just grew apart—redeems the gooey sentiment.

The wedding takes place in London, where Thompson’s character Kate Walker is busy dealing with her own Screenwriting 101 problems: a nice-but-boring job at Heathrow, a nonexistent love life, and an uptight British mum who’s obnoxiously concerned about her daughter’s lack of a mate. (In a silly, time-padding subplot, mum is also nervous about her Polish neighbor’s backyard meat smoker.) So our two flustered, socially awkward protagonists meet in an airport bar and get along agreeably, leading to a sub-Before Sunrise walk-and-flirt through the South Bank and a third-act “Can we make this work?” conversation.

Last Chance Harvey doesn’t trample over the shredded remains of a once-great genre like so many contemporary romantic comedies, but that’s mainly because its best moments aren’t really romantic comedy to begin with. When Hoffman tries and fails to reenter his broken family’s reformed bubble, Harvey is closer to a 1970s character study than a malformed descendant of the Hawks/Cukor/Sturges golden era. It nearly resembles Loving, a much better film from 1970 starring the great George Segal as a self-destructive advertising illustrator. Like the better moments of Last Chance Harvey, Loving isn’t about anything more than a single man living his life; in the hands of Segal and director Irvin Kershner, however, that’s more than enough for a gripping, insightful film. Harvey, with its uneven, unoriginal script and constant drone of syrupy music, drowns the modest personal story at its core in an attempt to appeal to a wider audience. It’s the perfect project for Dustin Hoffman to have taken on… in 1971.