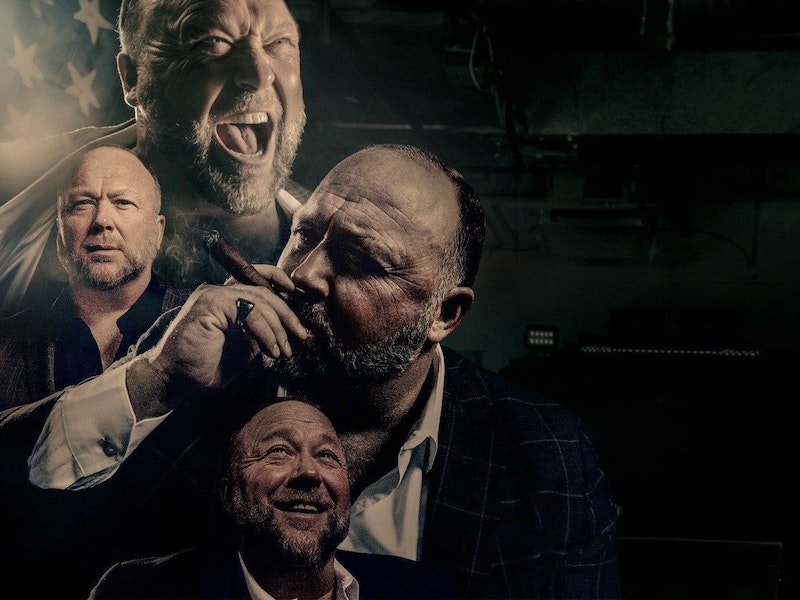 Alex Jones will never recover, as a journalist or a public figure, from his years-long suggestion and eventually insistence that the 2012 Sandy Hook shooting didn’t take place. In a new documentary by Alex Lee Moyer, the InfoWars broadcast from that day is played, and Jones said that, “I have a sick feeling… I just feel like the feds are behind this. It’s just what my gut tells me.” You can’t get sued or discredited for that; a lot of people don’t believe the official government story of the JFK, RFK, or MLK assassinations, along with 9/11. But no one denies those men died, or that the events of September 11, 2001 didn’t take place (although I do remember reading a very funny GeoCities page around 2004 where an older woman really tried to make the case that the planes that flew into the Twin Towers were holograms).

Raging on and on claiming that a tragedy, an elementary school shooting where 20 children were killed, never took place at all, and that the survivors and parents of victims were “crisis actors,” was insane and unconscionable, personally and professionally. It took Jones years to recant, and even then, there are still cuckoo InfoWars listeners sending death threats and mail bombs to parents of Sandy Hook victims. An analysis of his life and prior work, however valuable, is forever compromised by his own actions. He gave the media and “globalists” he spent his entire life trying to expose all the ammo they needed to destroy him and everyone within a ninth degree radius.

All of this material is covered late into Alex’s War, a 131-minute documentary that either should’ve been expanded into a mini-series or focused on one aspect or period of Jones’ life, like his early years to the successful infiltration of Bohemian Grove in 2000; or the start of his media career through Sandy Hook; or a movie about one event in particular—there’s more than enough material. Jones has verbal diarrhea, which has helped him as a broadcaster but often makes it hard to get beneath the surface: part performance artist, part anarchist/libertarian, part sentimental “patriot,” part slightly mentally ill product of late-20th century America. In other words, crazy. This is not an indictment, and beyond what I wrote above, he’s someone who’s been sandbagged by corporate media for a reason.

Why? I could give you a million guesses, but I can’t commit to this life because it doesn’t put me in a happy mood. I’m with comedian Bill Burr: researching the origins of the Federal Reserve is enlightening, but profoundly depressing and usually gets you nowhere. What are you going to do? I think it’s outrageous that Jones has been blacklisted from every major media provider while criminals of all classes are allowed to come on and smile on this or that talk show or newsmagazine. Moyer’s film nevertheless makes a weak case for Jones as a man (after walking into agent provocateurs on January 6, he looks lost trying to control the now massive and confused crowd). His Bohemian Grove scoop is as great as his Sandy Hook statements were obscene.

Much like the man, the film cancels itself out, partly due to a lack of distance: Moyer treats Jones like a friend whether or not he is, and even then there isn’t much here you can’t get from another Jones or InfoWars book, movie, or article. There’s too much talking-head footage of Jones explaining himself, when he’s spent almost his entire adult life on the air talking. There should be more counterpoint here. Moyer’s 2020 documentary TFW No GF felt so much more expansive than this (despite being only 83 minutes). Through the lives and testimonies of half a dozen young disaffected white American men, Moyer created one of the first essential documentaries of the decade. It’s a film that will be watched and remembered years from now. Alex’s War doesn’t compare.