Eat Italian and Spin Me Round

I'm all for Olive Garden-bashing, but the movie doesn't commit to it, and it's an old joke at this point. 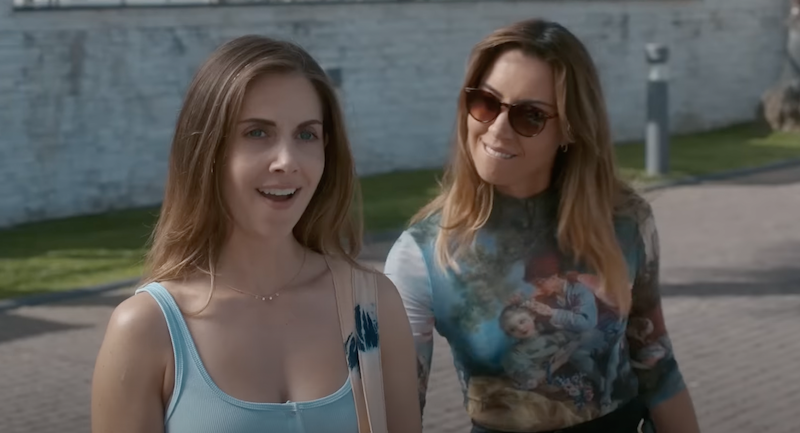 Spin Me Round doesn't at all succeed. It pivots, from an ensemble comedy that's mocking the Olive Garden, to an Under the Tuscan Sun/Eat Pray Love-style romcom/travel fantasy, to a mystery to a thriller, to whatever happens in the third act. It's a missed opportunity, putting together a talented cast of funny people, but not giving them much funny stuff to do.

Alison Brie and Aubrey Plaza both broke through around the same time as actresses on network sitcoms (Community and Parks and Recreation, respectively), and now most often seen in indie movies. They're both in Spin Me Round (Brie co-wrote the film with director Jeff Baena, who previously directed her in Horse Girl, while Baena is married to Plaza). Brie plays Amber, the manager of an Olive Garden-like chain Italian restaurant in Bakersfield, who's awarded a trip to Italy to visit the company's "institute," presided over by company founder Nick Martucci (Alessandro Nivola.) Plaza plays Nick's enigmatic assistant, who hints at love triangles with a couple of different permutations.

The trip ends up a disappointment to most. They're put up in a less fancy hotel than promised, and the "institute" mostly involves cooking unimpressive meals and, at one point, watching Life is Beautiful. Brie’s fellow managers include a comedy all-star team with the likes of Tim Heidecker, Molly Shannon and Zach Woods, although none of them are given much material to work with. Woods is the standout, with a couple of angry monologues, but Shannon’s entire character arc appears consists of calling every other character a bitch.

Whatever this film attempted to accomplish is quickly lost in the endless tonal shifts. The satirical target shifts from bad, inauthentic restaurant food, to the art world (during a brief unfunny scene with Fred Armisen), and ultimately to #MeToo-era gender politics. Brie is very appealing and holds the screen, although the character seems written as an unconfident, loveless middle-aged woman, for which the actress doesn't look the part. Plaza is good as the type of ambiguous character she plays best, and she can be seen doing it even better in the current release Emily the Criminal.

Nivola’s also impressive as a character who may be a romantic hero and may be a fraud, but I'm sick of movie characters accusing each other of "gaslighting" (the recent Bodies Bodies Bodies, at least, parodied that effectively, and unlike last year’s Being the Ricardos, it doesn’t have characters in the 1950s talking about it anachronistically).

I'm all for Olive Garden-bashing, but the movie doesn't commit to it, and it's an old joke at this point.