Remembering a natural actor, one of Rainer Werner Fassbinder's most underappreciated collaborators. 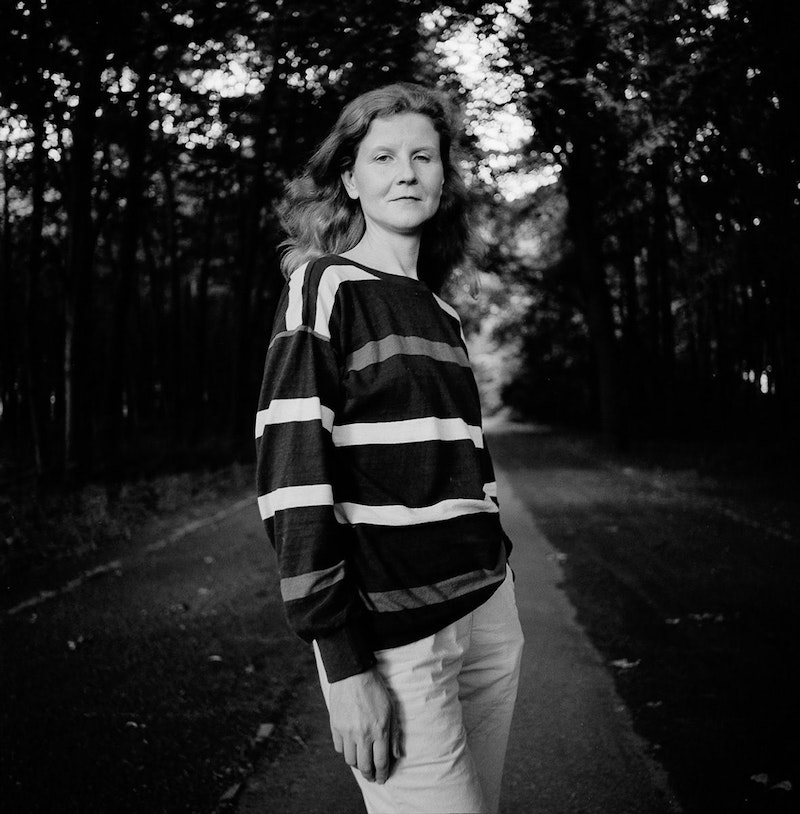 Irm Hermann died in Berlin last week after a “short, serious illness.” She was 77. Hermann was an actress, though it wasn’t her “calling,” or anything she expected to do with her life—but then she met Rainer Werner Fassbinder, and he turned her into a star. Hermann was one of Fassbinder’s primary players in his stock company. She was also one of his earliest encouragers and patrons: they lived together in the late-1960s and she supported him, a prolific and creative genius, because she was in love with him. He was gay, and not at all interested in her, but she took the abuse and the burden and they made 13 movies together between 1968 and 1975. After that, there were a few appearances (Women in New York in 1977, and cameos in Berlin Alexanderplatz and LilI Marleen in the early-1980s), but they were never as close, in life or in work.

Hermann had no airs of being an actress or artist when Fassbinder met her, but once you see any of her performances in his films—especially The Merchant of Four Seasons—you understand, as he did, what a brilliant actress she is. Hermann is a natural, but would’ve been (and would be) rejected by almost every casting director in the world for looking too tall, too bony, too angular, too Teutonic, too “unconventional.”

Look at any interview of any director with a stock company, whether it’s Ford, Fassbinder, Altman, or Almodóvar: the press always praises a filmmaker for picking “such interesting people” whenever someone without a nose job shows up on thousands of cineplex screens. People love actresses like Hermann, and insiders hate them because they prove that acting is something we all do on a daily basis, and if you’re not a natural, you have to have it drawn out of you. Whether by your own hand or that of an auteur. But it’s within us all. This drives casting charlatans crazy.

In Fassbinder’s films, Hermann usually plays nice hookers or mean housewives. But some hookers are more developed than others: the “Whore” of The American Soldier appears only to be executed in the beginning by getting shot in her pussy by the title character, yet the hooker of Pioneers in Ingolstadt has the most lines and is the mouthpiece for social conventions the film (and the original play) were criticizing. That hooker’s name was Irmgard Epp. So was her character’s name in The Merchant of Four Seasons, a desperate and despondent housewife trying her best to deal with an abusive alcoholic husband.

Fassbinder’s actors are often dismissed because of the director’s alternately austere and bizarre blocking—they appear like puppets and dolls. But even in Effi Briest, a bleached white Brechtian adaptation of the 19th-century novel, Hermann distinguishes herself. There’s a passing resemblance to Fassbinder’s own mother, who appears even more frequently in his work. She’s a stark, penetrating presence, and she used her physique—like that of a stork, or an emaciated Big Bird—in all of her work, she acted with her entire body.

But it doesn’t take a genius to recognize natural actors in the wild. Not enough people have their eyes open. Irm Hermann had to be dragged into the world of movies, and even after Fassbinder died in 1982, she continued to work, even appearing in a hit comedy called Fack ju Göhte 3 in 2017. Watching her work with Fassbinder, it may appear at first he wasn’t that interested in her abilities, given how limited her roles were. Hermann was, by all accounts, a sweetheart, yet in Fassbinder’s movies she’s often a tyrant, or another jaded member of a morally bankrupt society.

In Mother Küsters Trip to Heaven, she treats her mother-in-law like shit, even after her husband commits a murder-suicide at his slaughterhouse job. In Ali: Fear Eats the Soul, she laughs at her own mother when she tells her she’s dating a black man; and in Eight Hours Don’t Make a Day, she’s the sourpuss conformist coworker to Hanna Schygulla’s free spirit. It’s especially amusing when, somewhere around hour four of that series, Hermann’s character gets drunk and finally loosens up with everyone else, royally smashed all together in one apartment.

But it’s The Merchant of Four Seasons that has best work with Fassbinder, one of the most unique and arresting films about post-war quiet desperation. For once, Hermann’s housewife is a fully realized character who loves her husband but knows she must leave him because he’s abusive and promiscuous. Even in the most literally “artificial” moment in the film—tears painted onto Hermann’s face as she watches, along with all of their friends, her husband drink himself to death, in silence—Hermann brings something open and exposed that experienced actors (such as Schygulla and Margit Carstensen) rarely show. It’s the weariness of the world there in itself, not one step removed, not depicted, but captured.

Anyone can be an actor because everyone acts. But it must be seized on and encouraged. “Non-actors” is a nonsensical term, and Hermann was proof of that.