Straight to the Heart of Veep-ness

Unpleasant moments that show what the program’s about. 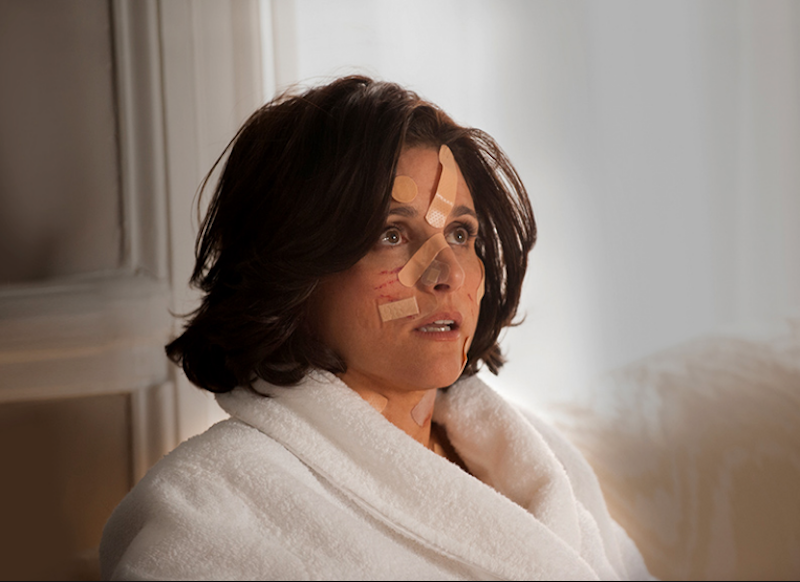 “No berets, no Stetsons, no beanies,” says Jonah. One of the others, Mike, says, “Why are you just listing hats?” Mike’s a good-natured dummy, but he can be smart when the camera isn’t looking straight at him. If the camera’s moving somewhere or if Mike’s away to the side (as in this case), he can mouth off like anybody else. The show keeps moving and there’s no need to dwell on how the dope suddenly grew a brain. What the hell, everyone has their moments.

Ben, who’s chief of staff, and Kent, who’s senior strategist, are both yelling at Jonah. Ben wants one thing, Kent wants the other: two contradictory things. Which is Jonah supposed to do? “Pick a fucking side!” yells Ben. “Use your judgment!” bellows Kent. Poor Jonah shambles away, speed-walking on his stilt legs. Normally, I think, the two men wouldn’t be leaving the choice to a flunky. But a choice like this—which master to displease?—is painful to Jonah. Giving pain to Jonah is everybody’s mission on Veep.

There was one thing nobody could know: the Veep had just walked into a glass door. Mike revealed this secret the first time somebody asked. This was at a function, and an obnoxious donor wanted to know why the Veep hadn’t shown. Mike lacked even the decency to blurt; he went through a decision process. “Okay, listen to me,” he said, pushing his chin forward and narrowing his eyes, and out the secret came. Possibly the chin-pushing and eye-narrowing made him think he’d grappled with the situation. Upstairs, in the Veep’s suite, Dan gibes at him for his screw-up. But the Veep calls over from her bed, “What’s his problem?” and then, to Mike, “Get over here, gingerbread.” She’s gone silly because St. John’s wort has reacted with her anti-depressants. Nevertheless, everyone takes her word as final. Mike’s epic blunder disappears as an issue. They’re still dealing with the fallout from his mess, but it isn’t his mess. It’s just the usual mess, the ongoing condition.

The people on the team don’t respect or like the Veep. Amy and Dan are both looking to be hired by one of the Veep’s rivals. Dan thinks up a good one when he hears about the Veep’s accident with a glass door. “That woman’s become a living metaphor for her whole career,” he says. (Because being vice president is more of a lateral move, not the ceiling, and the Veep has done badly by her time in the office.) A little later he holds a door open for Amy and she walks through. “See, you made that look so easy,” he says. Possibly he held the door open just so he could make the crack.

But the Veep’s the most important person in the room, so they orient their lives around her. Their lives include their self-respect, or what they have in its place. “I’ll just sit here being right,” says Jonah, complacently. He’s just said the Veep should get out there and hold a press conference, even with all her cuts and wounds from the glass door. Everybody, the gang of staffers, howled him down. But then the Veep said, “No, it’s time for me to show my face, my fucked-up face.” Now Jonah’s basking. But he doesn’t even work for her. Nor does he like her, and she treats him like dirt (“Jolly Green Jizz-Face,” she calls him at one point). None of that matters. Really, there isn’t much that does.