Hollywood tends to have a poor understanding of itself sometimes. Perhaps it's the insider culture that lets directors surround themselves with yes-men, or maybe the dry heat of LA, but for whatever reason many movies have tried serious scenes of violence and fear while failing miserably. Here are some of the best. 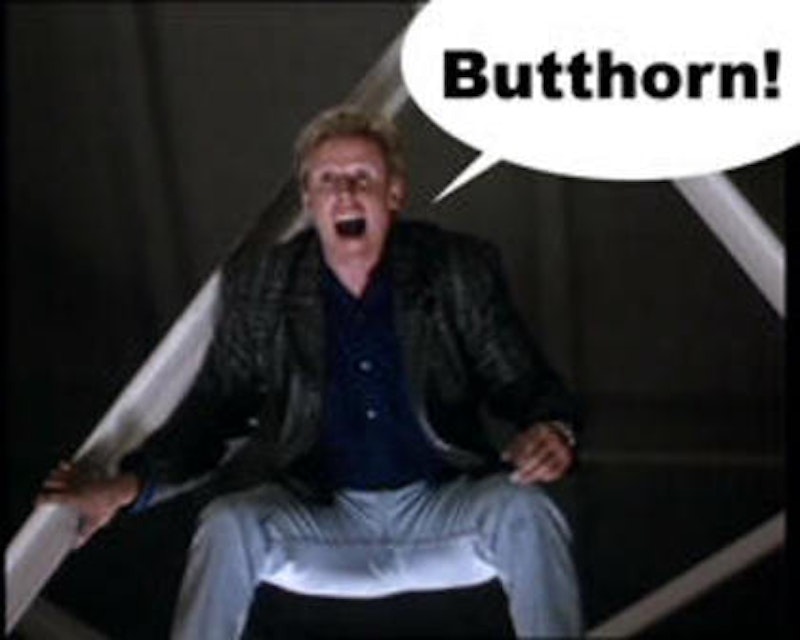 Gary Busey has proven time and again that he is the cinematic equivalent of everything that has ever been awesome in the history of forever, molded into one semi-unstable, frightening man. Put him in a warehouse full of bad guys, and magic happens:

A mid-'70s crime drama, The Streets of San Francisco was a show where future governor Arnold Schwarzenegger made his TV debut as a bodybuilder (he didn't have a whole lot of range back then). He wasn't just any bodybuilder, though, he was the kind of emotionally unstable man-child you just didn't want to fuck with:

This scene is akin to a religious experience: It can't really be explained in any satisfying or logical way. But it happened, and cannot be denied. A kid screams "PANCAKES!!!" and does some kung fu at the air. Then bites a dude.

Even the director Roth admits it was made on the fly. Apparently that kid with that hair just showed up one day during casting, doing some kung fu shit and Roth did what any man would have done: rewrite the scene to include him. Hell, if the kid had shown up to the set of Schindler's List, we like to think Spielberg would have done the same.

Demonstrating the exact level of awesomeness that permeates Enter the Ninja, the white pajama-wearing ninja (a camouflage that indicates he was expecting a snowstorm in the brutally hot factory where he was fighting) takes out this thug with one single throwing star to the chest. The assault not only kills the man, but appears to make him lose faith in even trying to survive. After a moment's shock at the realization he's been stabbed in the heart with a ninja star, he just stares wistfully, shrugs and then kicks it.

We like to think the star was coated with some kind of special poison that just instantly makes a man not give a shit about anything.