Back in the Closet

In a post-Brokeback cinematic world, we’re back to the staid 1950s view of homosexuality. 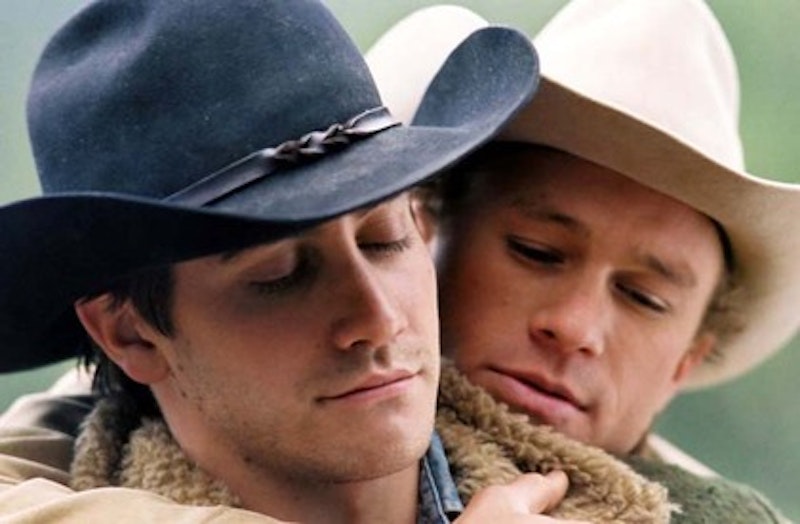 I hate to beat up on no-budget indie movies. Even worse, a festival flick. What's the point? Nobody sees them anyway. But I recently saw a well-done indie tarnished by a disastrous cliché, so I have to take out my pet peeve pen and start marking it up. This time, my peeve is: the repressed homosexual. He, or she, is the straight person who hides his or her feelings for the same sex. Yes, there are still countless people torn over their sexuality, but do I need to see them over and over and over again in supposedly artistic movies?

The film in question is The Lost Coast, an almost-wonderful film about four young people in San Francisco trying to find a party on Halloween. The movie was well-shot, well-acted, accompanied by a moody and appropriate score, socially relevant yet close-to-timeless. The film won best narrative feature at the New York gay and lesbian film festival and so got a special screening at BAM this past weekend. It's such a shame, then, that writer-director Gabriel Fleming sullied a 21st century film with a 20th century cliché.

The repressed homo/hetero is the perhaps most prominent of all gay types in literature and film. I cannot begin to list how many times its sullen tendrils have gripped classic novels. It's more rare in film, but no less prominent. Several Hitchcock films feature this character, always villainously, as in Rebecca, Psycho and Strangers on a Train. In the 1960s, he made his way, ever so slyly, into such films as Reflections in a Golden Eye and Boys in the Band (inconspicuously in the latter, and to great effect in both). Some even claim James Dean's Jim Stark in Rebel Without a Cause hides a same-sex urge. This was during the time when homosexuality was classified a mental disorder. One study, when analyzing 32 films with major gay characters from the 60s and 70s, found 13 movies with a repressed character committing suicide and 18 films with him killed by others. That's right, only one had them still alive and fucking.

Despite the pain of the past, he—and sometimes she—keeps coming back, in movies popular, indie, mediocre and award-winning. Notes on a Scandal, The Dying Gaul, Heights, Bad Education, Far From Heaven, Midnight in the Garden of Good and Evil, The Talented Mr. Ripley, American Beauty, and  Evening, The Hours, and A Home at the End of the World, all based on novels by Michael Cunningham, are just a handful of the ones from the past decade that I've seen and remember. Who knows how many play in festivals or simply have not hit my radar.

Then, of course, there is the biggie: Brokeback Mountain. Ah, Brokeback; we hardly knew life before ye. Because it grossed an astronomical $178 million worldwide Brokeback will forever be the most visible film about repressed homosexuality. Heath Ledger's mumbling Ennis Del Mar and Jake Gyllenhaal's Jack Twist are the two icons of the stereotype. Deep and visceral, Ennis and Jack moved millions to tears and empathy.

This is why Lost Coast was so damn frustrating. After all this time, the movie offered a mere high school affair as the source of angst for an otherwise excellent movie. To boot, the film boxed you in, leaving no other interpretation of the main character except his refusal to acknowledge his same-sex leaning tendencies. With a little creative screenwriting, the audience could have walked away thinking it wasn't homosexuality but instead lost love tormenting our protagonist. But nope, that would be complex and interesting. For all its gorgeous cinematography and measured storytelling, Lost Coast gave me a character type so uninteresting Matt Damon has already played it.

This is at time when so many movies are doing such interesting things with sexuality, like John Cameron Mitchell's Shortbus and Hedwig, or Eytan Fox's Yossi & Jagger and The Bubble, or—a new favorite—Christophe Honoré's Love Songs, which features a sexy and utterly label-defying character in Louis Garrel's Ismaël.

Listen up, indie screenwriters. Don't make me write this column again. Make your characters interesting, and provocative; let them kiss someone of the same sex without breaking into tears.