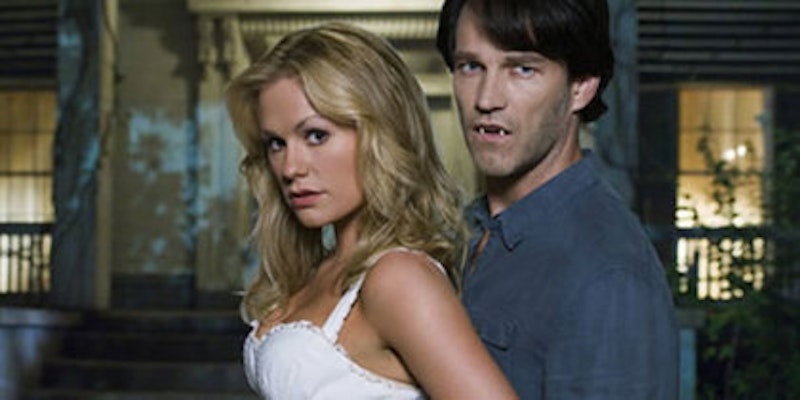 Pity the narcissistic horndogs of Vincent Chase’s coterie: HBO may have finally fielded a show more sex-obsessed and relentlessly focused on the groin than Entourage. Alan Ball, the Academy Award-winning creator of Six Feet Under, has put together an intriguing, allusive pilot that promises great things further in the season. On its own the premiere of True Blood is a little silly and undeniably heavy on the exposition. The series relies on the conceit that vampires have “come out of the coffin,” as several characters say, thanks to the invention of synthetic blood (in Japan; where else?). In an amusing little HBO wink, they bring in Bill Maher’s Real Time to explain that vampires now live more or less among normal humans. But in True Blood “normal humans” do almost nothing but talk about vampires.

The pilot reaches its heights when it shows the oppressive fear of the dark, humid countryside of rural Louisiana. A road appears like a stygian tunnel in the opening scene, and the immemorial whine of crickets in a bar parking lot evokes a rustic terror. The characters perhaps unfortunately spring from the same soil—they are almost uniformly shitheels and sass-talking floozies (and the men all look nearly identical). Anna Paquin looks amazing in a tight white t-shirt and turns in one of her signature, immensely charming performances as heroine Sookie Stackhouse. She makes TV Southernisms like “bless my heart!” sound almost believable, and her accent is a little less Hollywood than some of the others.

Paquin plays a waitress with inexplicable psychic abilities and an emphasized lack of a boyfriend. Sookie works at Merlotte’s, a bar that seems to be the center of the local universe. In the bar’s dark parking lot she rescues Bill, a seam-cheeked and stubbly vampire, from a pair of local drug dealers. The drug dealers are draining Bill’s blood in order to sell it and have trapped him under a thin silver chain, an eerie image that raises my hopes for the rest of the season (and speaking of eerie images, the opening credits are superb). The dealers swear revenge and Bill and Sookie begin a surprisingly chaste courtship. The fact that tiny Sookie saves intimidating Bill is a reversal typical of Buffy, but True Blood has a distinctly less happy and more grown-up vibe than its predecessor.

The b-plot for this week’s episode involves Sookie’s brother Jason (Ryan Kwanten), a southern Adonis whose moral compass is much less defined than his abs. He may or may not have murdered a local woman during an extremely sordid and sweaty sex scene; the cops think he did; so does everyone else in town. The woman, Maudette Pickens (really, Alan Ball? Enough with the names), confessed to Jason that she had accepted $1000 to have even more sordid intercourse with a bald, tattooed vampire. I am sure that we will see him later in the season; we have already glimpsed him coupling with Maudette in a skin-crawling homemade sex tape. Vampires and sex seem to weigh on everyone’s minds in True Blood.

It’s hard to say too much about this initial foray into the damp southern climes of True Blood. In the typical tradition of pilots it spends most of its time setting things up for subsequent episodes. The pilot showed flashes of Alan Ball’s assured command of Six Feet Under. The large cast has some sense of depth and past, although they spell it out somewhat woodenly in this episode. But the depth is there—Jason, for instance, takes great pains to make sure that the members of his construction crew think he went with the police voluntarily when they come to take him away (but of course he doesn’t fool them).

Even if they are unrealistic, stereotypical, or both, most of the characters are charming. Lafayette (Nelsan Ellis), a gay line cook, steals both of his scenes; his charisma overflows his demonstrably meager circumstances. Sookie’s best friend Tara (Rutina Wesley) plays a sass-talking African-American who prefers intense reading to customer service and who really doesn’t seem like someone who has been friends with Anna Paquin’s character for years. Sookie’s boss Sam (Sam Trammell) broods his way through a role that demands more staring than dialogue. He’s in love with Sookie but looks much too old for her; it’s hard to tell if this is a plot point or just a bad casting decision.

I imagine that many critics who watch this show will focus on the metaphorical usefulness of vampires. Vampires can stand for almost any transgression; they are the dead, the ultimate other, grotesqueries that nonetheless exert an erotic power. True Blood treads lightly on these well-worn tropes—when characters talk about vampires they mostly analogize them to minorities. Sookie particularly insists that we must not judge all vampires by the unfortunate excesses of a few of their number (of course, Sookie may make this argument out of lust rather than reason). True Blood makes a good and clever move by giving the actual vampires extremely limited screen time in the first episode. The focus lays mostly on what the normal human characters make of the freshly proven existence of the living dead, and on what normal humans make of one another. So far in True Blood, people are much more cruel and treacherous than the undead. If Ball can keep metaphors from clotting too thickly around his bloodsuckers, and if he can maintain the mystery of the show’s mythology without making it idiotically complex, then True Blood may turn into something extraordinary. If not, then we still have a pretty rad show about vampires and screwing.