At the Edge of the Earth 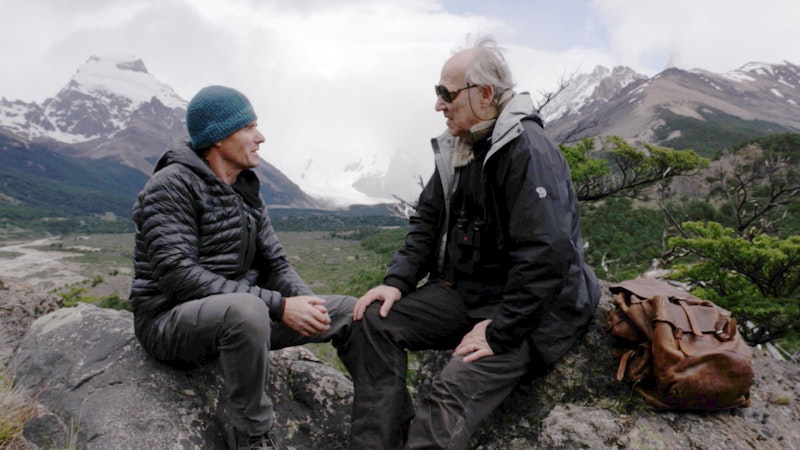 British essayist and novelist Bruce Chatwin is known for his travel essays. He’s gone to the edge of the world and back, describing the often strange world that he encountered. Whether it was the chase after the remains of a prehistoric animal or following in the footsteps of Australian aborigines, Chatwin’s restlessness proved to be a great benefit for his readers. His writing vocation was cut short when he died in 1989, from AIDS. It’s not a surprise that Chatwin and German film director, Werner Herzog, developed a friendship. Herzog’s film, Cobra Verde (1987) was based on Chatwin’s 1980 novel, The Viceroy of Ouidah, and Chatwin himself witnessed some of the action on the film set, including the usually expected madness of Klaus Kinski.

Chatwin and Herzog respected each other, and what particularly united them was their love of walking, which Chatwin considered a sacrament. Most of Chatwin’s adventures involved walking and he became famous for his rucksack and Moleskine notebooks in which he jotted down details of his trips. It’s known that Chatwin embellished details. Such embellishments were not necessarily lies but a way to get to another truth. In his 2019 documentary, Nomad: In the Footsteps of Bruce Chatwin, Herzog tries to search for his dear friend so that he may understand him better. This isn’t a typical biographical film, as it’s in the hands of Herzog.

Some of the footsteps lead to Patagonia, others to Australia, where Chatwin was looking for a way to understand the Aborigines’ relationship to the land through their particular songs. In the book that followed, titled The Songlines, Chatwin explores and analyzes how the song itself exemplifies the land that the Aborigines find themselves to be part of. Chatwin develops the notion that the language has originated from the song. Vocalized by the people, the song has brought the land into existence. Not only has the consciousness of the land appeared, it’s the consciousness itself that creates and re-creates itself.

This idea of existence was crucial to Chatwin, and to our understanding of his work, if not the man himself. He felt that there was something prehistorical, primordial that brought our humanity into the touch with the external world of nature. Nature, in her aggression and beauty, delivers a message that exists beyond time. This notion of time beyond time wasn’t just a theory for Chatwin. It transcended an idea and he lived it on a deep level. Living on the surface was an impossibility for Chatwin, and the nomadic restlessness was imbued by the consciousness of faraway places and people that no longer exist but whose “spirit” and “breath” are still part of the earthly soil.

Herzog interviews people that Chatwin was close to, including his wife, Elizabeth. She and Chatwin shared a bond, however odd it was. Herzog speaks to her at the Llanthony Priory in Wales. Here, we see the famous ruins of Augustan monastery. The arches without rooms stand on the brilliantly green grass, as if they’ve been carefully placed by a divine hand, yet gone unfinished. This incompleteness is what gives these ruins a fascinating air of mystery. Chatwin recognized this, and according to Elizabeth, it’s this very place that he’d always come back to. This was his “home,” where he could experience the “landscapes of the soul.” Such landscapes exist beyond being and time, and it’s this lack of full imaginative comprehension of the world that gave Chatwin both peace and restlessness.

One of the conversations that Herzog engages in is with Chatwin biographer Nicholas Shakespeare. As he and Herzog reflect on the meaning of Chatwin’s life, Herzog proclaims that Chatwin “was the internet” before the internet came into being. It’s an interesting statement especially since Chatwin’s life appears antithetical to the ontology of the internet. But there’s a distinction here that must be pointed out: Herzog alludes that Chatwin was not the internet culture but the internet itself—a variety of paths connecting one thing to another in unusual yet inevitable ways.

The culture created around the internet, in which many people base their relationships to others as well as the natural world, is mostly negative. Once subsumed by the anti-human culture of the internet, man is incapable of seeing time beyond momentary existence. The only thing that matters is that one moment when something is partially revealed only to be concealed again in the vortex of the imprisoning time. Are we even aware that we have become the captives of the time which moves neither backwards nor forwards but sits in negative suspension of impossibilities?

Chatwin wasn’t interested in captivity but in the possibility of being human. Herzog sees the same realities unfolding before his eyes, and tries to capture the ineffable. The mysterious presence is often unpleasant and violent but that doesn’t bother Herzog, or it doesn’t bother him enough to stay away from projects that take him to the end of the world and back. Nomad reveals the friendship in which there was no pretense but a clarity of mutual understanding. Chatwin’s work is about the ineffable—catching the glimpse of the time beyond time, and then arresting it in words that reveal bigger truth than truth itself. A man in search of others is also in search of himself.