In Rabbit Hole, Nicole Kidman loses a son and an opportunity. Grade: B- 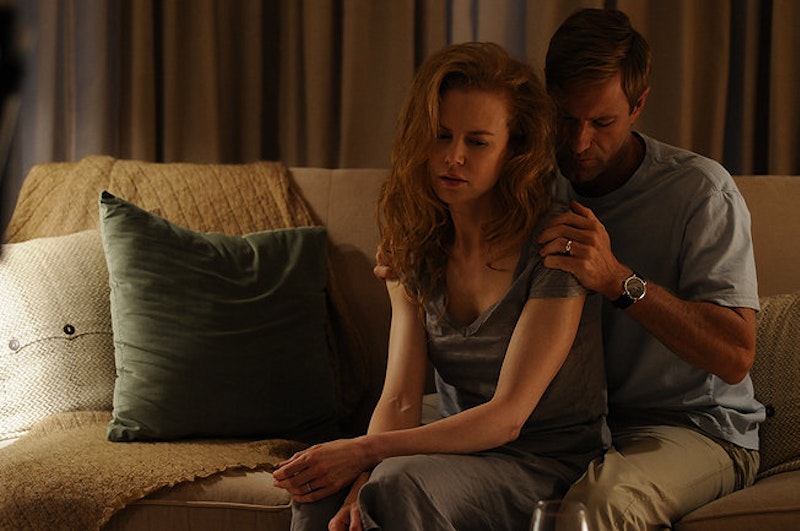 Dressed up with grim-faced actors and gauzy photography, Rabbit Hole arrives in a weary tradition of Hollywood movies on the process of grief. Directed by John Cameron Mitchell, this spare film version of the Pulitzer-winning play follows a couple, Becca and Howie (Nicole Kidman and Aaron Eckhart), as they move out of the paralysis wrought when their young son was killed by a teenager’s car some months ago.

The film’s early scenes—mostly of Becca dragging her feet through a support group and family gatherings—stumble through one tension-shrouded encounter after another. A neighbor, trying to repair a relationship severed after the son’s death, steps on a newly planted flower and is quickly shooed away. Becca scowls at ringing phones with suspicion and gazes dead-eyed into her late son’s finger paintings. The overextended symbolism and a consuming sense of isolation dovetail into punishing excess, boding dangerously for the rest of the movie.

And yet right when it seems like it’s going to be complete hell to watch, Rabbit Hole begins to move delicately toward separate, secret lives for both Becca and Howie. After Becca leaves the support group, Howie stays on, and eventually befriends a woman (Sandra Oh, a highlight) who he discovers one night smoking pot in the lot outside the center. (He understandably indulges.) Becca, in a creepier, altogether more gripping parallel story, begins to follow around a mysterious boy (Miles Teller, also outstanding). Slowly, we learn why, but even casual students of these movies will realize who the boy is long before the films unravels its secrets.

Asides with Becca’s mother and sister also pepper the action, and they are occasion for some of the movie’s best writing (by David Lindsay-Abaire, who adapted his own play), if not its most convincing drama. In one particularly stark moment, Becca asks her mother, who also lost a child years ago, “Does it ever go away?” “No,” her mother replies, before her eyes grow and she adds, “It changes, though … It turns into something you can crawl out from under, and can carry around like a brick in your pocket.”

Moments of more grace lie with Becca and Howie. Much has been made of Kidman’s barbed performance, and it’s easy to understand why, especially compared with Eckhart’s sensitive, minor turn as her husband. A big, alpha actress even in a hushed film like this one, she splits like shards into every scene, and she forges a rough solidarity for a woman who does not earn it easily. It’s a salient example of a performance that mines much deeper than its movie.

Rabbit Hole does muster occasional shades of Kidman’s verve, but mostly its unaffected aesthetic sensibility seems intent simply to stay out of the way. Himself a theater veteran who is typically a maximalist on film—his most recent feature is the explicit socio-sexual drama Shortbus—Mitchell directs Rabbit Hole with such insistent, solemn reverence for every line and movement that you wonder why he approached the material as a filmmaker in the first place. He competently stages some scenes, but then his decisions can be puzzling, as when, in a final moment of would-be catharsis, the camera glides in circles during an imagined family gathering, as if trying to project some emotional release that just isn’t there.

Abetted by a relentless, one-note score by Anton Sanko, Mitchell never really finds a way to free a story defined by its quiet, passing observations. And particularly in this well-traveled subspecies of the domestic drama, the movie’s peers—recent masterworks like In the Bedroom and The Son, lionized older works like Ordinary People—simply dwarf its modest, pensive ambitions. We’re left with a movie of halting beauty, admirable restraint but no real, raw power.