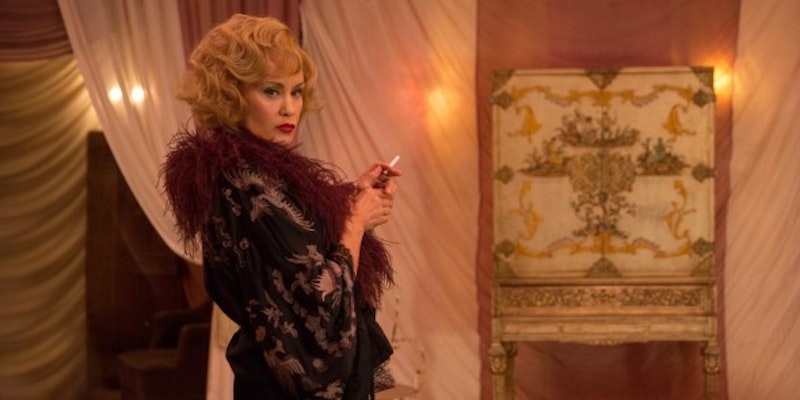 • The finale opens with Dandy taking charge of the freak show and insisting on the proper lighting in order to capture the essence of his show-tunes. A sign is put up advertising his new act but they don’t sell a single ticket, so Dandy goes on another tantrum claiming they need a new look if they want to be successful. The freaks are done with this shit though, and punch him square in the face and tell him they quit. Probably not a good idea since although its been a few episodes since we’ve seen Dandy slaughter anyone, we’re very aware of what he’s capable of.

• Elsa reappears in Hollywood determined to meet the president of a television network. She’s so determined, in fact, she spends her days waiting around just for the chance to run into him. When a snooty receptionist informs her that maybe she should change her act, Elsa slaps the crap out of her and is almost arrested before the gorgeous David Burtka (Neil Patrick Harris’ studly husband), playing casting agent Michael Beck, comes to her rescue.

• Dandy decides to go on another one of his murderous rampages and shoots up more than half the freak show, killing off characters we were supposed to have bonded with for the entire season. I suppose that was the theme of this season, no one’s death really mattered.

• I can’t help but wonder if this is one of Ryan Murphy’s symbols for making Finn Wittrock the new male lead of AHS after this season. His character was certainly more prevalent than Evan Peters’ this season, and in season one it was Evan Peters’ character who went on a bloody shooting rampage.

• Just as Dandy is about to discover the hiding spot of Desiree, Amazon Eve attempts to fight him off, only to be shot in the head. We find out that the Tattler twins have been tied up by Dandy, who begs them to run away with him.

• Jimmy comes back to camp with his new wooden claw hands from wherever the hell he’s been and discovers that everyone but Desiree has died. Immediately we’re taken to the very disturbing wedding of the twins and Dandy, who tells them that he can’t wait to have “freak babies” with them and that everyday in his play room they’ll put on their own freak show. Thankfully this whole wedding is a farce cooked up by the twins, and Desiree, posing as a cook, slips Dandy drugs to make him pass out.

• When Dandy awakes, he's trapped inside Harry Houdini’s escape tank, and Desiree gives the most obvious monologue of the series. She says that Dandy may look like a Hollywood dreamboat, but he is the biggest freak of them all. Then she turns on a hose that begins to fill the tank with water. Dandy’s last words are, “I hate you! I hate you! I hate you!” The audience may have hated you too, Dandy, but you were by far the most interesting character this season.

• Fast forward a few years and Elsa and Michael Beck are married and her show has garnered her three Emmys (a nod to how many Emmys Lange has been nominated for on AHS?). However, the marriage is slowly falling apart and Elsa’s diva ways have been heightened by her success. Massimo comes back to visit Elsa and she divulges that she has always lived a cursed life, even though she has everything she claimed she’s ever wanted. When Elsa suggests she and Massimo run away together, he says he only has a month to live.

• The head of the network Elsa works for shows up at her house to tell her the video of her getting her legs sawed off has surfaced and soon everyone will know that she used to run a freak show in Jupiter Florida. When the head of the network also divulges that all of her friends were slaughtered, she says she'll perform on Halloween so she can “go out with a bang.”

• Elsa's performance calls back the green mist and with it, Twisty the Clown, Edward Mordrake, and the rest of the freaks in his caravan. She tells him that she’s the biggest freak of all and deserves to be taken. But when Elsa is stabbed she doesn’t join Mordrake’s clan, instead she wakes up back in the freak show where everyone, including Ma Petite and Kathy Bates’ character, are alive again.

• The final scene of this season finds Jessica Lange walking out onto a stage while the audience is going wild. It feels like a fitting ending to Jessica Lange’s last season of AHS, though it was an otherwise forgettable season.