Stuck in the Middle of Nowhere

A review of Vic + Flo Saw A Bear, directed by Denis Côté. 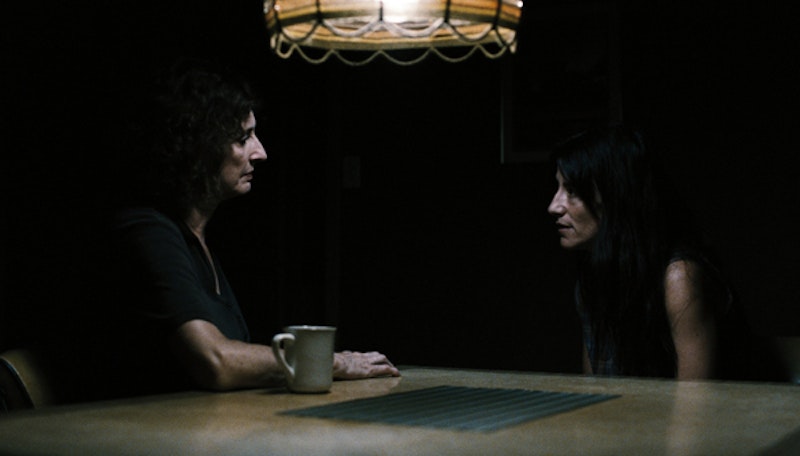 Arguably the most affecting moment in Vic + Flo Saw A Bear occurs in the movie’s closing moments, as our titular heroines wander, side by side, along a country road. It feels like true victory in a narrative bereft of them. The setting is the Quebec countryside, a rural purgatory where homes are set far apart, forests dominate, and a go-kart course is the premiere attraction—the sticks, essentially; a geographic concept that transcends language and culture in a way that few notions can.

Upon her release from prison for an unspecified crime, the sixtysomething Vic (Pierrette Robitaille) finds her way to the home of her invalid uncle, who lives in an old restaurant. Flo (Romane Bohringer), Vic’s fortysomething lover, joins her shortly thereafter. A dapper, intense parole officer (Marc-André Grondin) with a peculiar interest in Vic’s rehabilitation also stops in frequently.

Theirs is a sleepy, no-future existence: lots of cigarettes smoked, lounging by the pool, tooling about in a golf cart—low-key relationship drama. Secondary characters abound at the margins: the uncle’s miffed former caretakers, a sexually forward neighbor with a green thumb, a rogue’s gallery of dudes Flo cruises and beds at the local bar. It’s all very, very droll, and (literally) very, very French; nothing much really happens.

Or rather, nothing seems to happen, and with Vic + Flo, it’s a mistake to wait for something to happen, because the movie’s byproduct is less climax than a fatalistic slow glide. The minimalism at work forces the viewer to magnify and drink in what would be small moments in a more conventional film: a bearded man leaning against a white panel truck, playing a tune on an acoustic guitar; intense, single-shot exchanges; a race-suited stranger perched wistfully on a balcony, watching go-karts zip by. Watching is like drifting through somebody else’s eventless dream.

Director Denis Côté strikes a perfect balance between the inherent spookiness of nature—watching this after Children of Men probably isn’t a great idea—and the drabness of lives without purpose or direction, as if to ask, unconsciously, if this is life, is it even worth living? For a few fleeting scenes Côté lingers on the outdoor recreation yard of a women’s prison, but it’s only at the end of the segment that you recognize the setting. They’re socializing, these women, watched by a bored, less than able guard and penned in by chain link and razor wire—yet this is the movie at its most convivial.

While watching, I didn’t understand why we needed to see the prison, since it failed to connect directly to the story. In retrospect though, I think I get it: imprisonment or institutionalization is preferable to the unexceptional free lives this ex-con couple are living now. The climax of Vic + Flo—yes, there is one, near the denouement—reveals that the bear in the name is a metaphor for unseen inevitability. En route, though, the weathered ease of the lead performances astonishes: Bohringer’s lean, diffident ravenousness for something more, Robitaille’s cocked, bedraggled indignation, Grondin’s nurturing firmness. You leave feeling like you know this trio, very intimately, and you crave more of them together, somehow.