The Curious Case of Benjamin Button epitomizes “style over substance.” 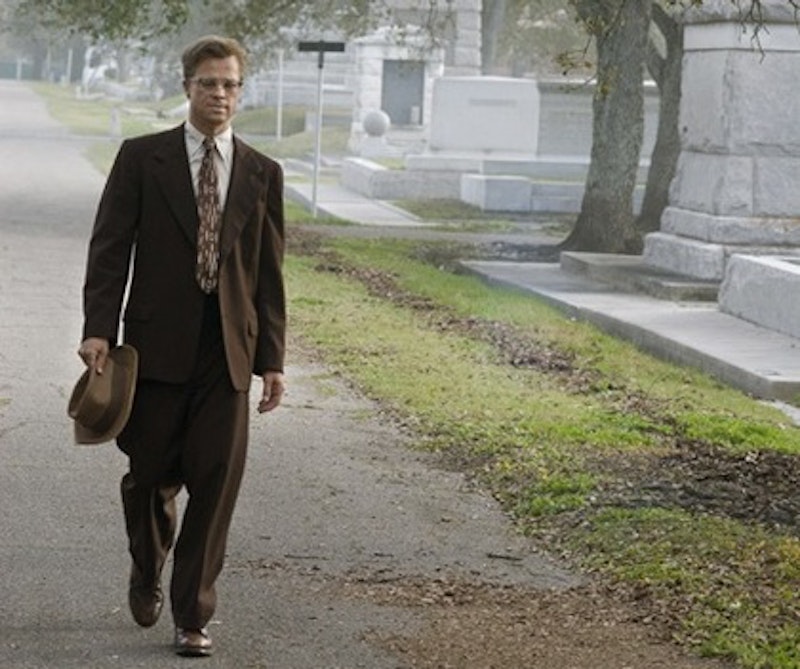 With a story drawn from classic literature, major stars in the marquee, a nearly three-hour running time, 70-year scope, and eye-catching technical innovations front and center, The Curious Case of Benjamin Button seems to fulfill every conceivable definition of “epic.” But big-screen sagas don’t exist on paper, and Benjamin offers no real drama or entertainment beyond its pedigree. As directed by David Fincher, whose last film Zodiac felt far more spacious and urgent despite its smaller scale, Benjamin is often as droll as its lugubrious, mumbling protagonist (Brad Pitt), and as soullessly technical as its female lead, Cate Blanchett. It has, in short, every ingredient for an inspiring, grand film except the things that make films inspiring and grand.

F. Scott Fitzgerald’s eponymous short story is graciously credited as the source material for Fincher’s film, but the only thing the director and screenwriter Eric Roth actually borrow is the central metaphor: Benjamin, the title character, is born as an 80-year-old man and grows younger, until by his life’s end he’s a newborn again. In Fitzgerald’s telling, Benjamin is born in Baltimore right before the Civil War; he’s over five feet tall at birth, with the caddish humor of an actual geriatric; he gets along well with his widower father, who owns a hardware store; and his primary difficulty—this being Fitzgerald—over the course of his 30-odd-page life story is trying to fit in on the Yale football team. His wife, Hilde, is also distressingly less attractive to him as they grow farther apart in age.

The story is one of Fitzgerald’s minor Jazz Age tales, written primarily as a humor piece and consciously free of the deeper metaphorical implications of Benjamin’s plight—that “life can only be understood backwards but must be lived forwards,” the Kierkegaard quote that Benjamin’s producers have plastered all over the film’s posters. And that’s a fair indicator of the filmmakers’ approach to Fitzgerald’s story; they’ve borrowed the framing conceit and title, and written an entirely new Forrest Gump-style life story that’s played for maximum pathos and tear-jerking every step of the way.

The film centers around New Orleans and starts in 1918, which, so far as it’s made clear, is mainly an excuse for Fincher & Co. to insert an unnecessary, distracting Hurricane Katrina frame story. In a Ninth Ward hospital, an elderly Daisy Fuller (Blanchett under heavy makeup, trying to outdo Dustin Hoffman in Little Big Man but without any of that actor’s humor) asks her grown daughter (Julia Ormond) to read an old journal aloud to her. It’s the journal of her old friend Benjamin, and from that point on, Pitt’s voiceover handles main storytelling duty while the film occasionally reverts back to contemporary New Orleans with distracting, Princess Bride-worthy frequency and clunkiness.

Aside from perhaps the humanitarian inclination to help a flailing city (which is indeed admirable), moving the story to New Orleans doesn’t add a thing to Benjamin beyond this bizarre narrative frame, which adds upwards of 30 minutes to an already overlong film. Then Roth tacks on a sort of preface to the story proper, about a blind New Orleans man who builds a railway station clock that moves backwards. This sequence, as well as the recurring period footage that pops up throughout (mainly in a silly, broadly comedic recurring joke about lightning) is made to look like vintage film stock, with visual distortion and pops and all the rest. Fincher, who’s always been a supremely geeky technician, overplays his hand in Benjamin, rolling out one stylistic gimmick after another to the point where the film feels as worked-over and fussy as the human story it tells.

As for that story, Gump, which was also written by Roth, isn’t too far off. When Fincher and his screenwriter aren’t aiming for pathos, they go for maximum whimsy, as in the aforementioned lightning and rail station clock digressions, but also in the nearly caricatured black characters that adopt baby Benjamin when he’s left on an orphanage’s steps by his disgusted father (who—get ready for whimsy—is actually a button-maker, not a hardware store owner.) Beyond just happening to be born on the day WWI ends, Benjamin just happens to be touched dramatically and memorably by the bombing of Pearl Harbor, the sinking of the Wilhelm Gustloff, and a handful of other notable historical events.

Benjamin’s story takes him from a quaint, hazy Big Easy to the city’s dankest steamship ports, through WWII, and on through the 1950s and 60s, all with the love of his life on his mind. The romance between Benjamin and Daisy is semi-affecting because of its awkward restrictions, but Pitt’s not passionate enough and Blanchett’s not emotionally attractive enough for it to work. Blanchett’s rightly praised for taking on a lot of different kinds of roles, but she brings the same practiced iciness to all of them. I’ve never once felt, while watching her perform, that I was witnessing anything other than a performance. My favorite of her roles, the pregnant uptight journalist in Wes Anderson’s The Life Aquatic, works because her natural affectedness fits seamlessly into Anderson’s hyperstylized aesthetic; that movie is all about practiced glances and perfect comedic timing, and Blanchett can calibrate a performance with the best of them. But she never moves me because she never relaxes in front of a camera. Particularly in Benjamin, where her face and body are either CGI- or prosthetic-enhanced nearly all the time, her role is entirely too self-conscious. In this way she’s perhaps perfectly suited to Fincher’s overcooked FX-laden melodrama, but it never allows us to care about the people in Benjamin Button.

Pitt’s no performer at all, but he does possess a certain inexhaustible, childlike charm that’s put to good use here. He largely mumbles in a N’awlins drawl from beginning to end, and Fincher—who, it must be said, can be an intermittently powerful visual stylist—gets to dress him up in some James Dean threads, or put him on a motorcycle or sailboat, or other animated Ralph Lauren ads, and the two achieve some images that feel preemptively iconic. But again, this isn’t the same thing as building a character, and Benjamin never feels like a real person onscreen.

The same goes for the rest of the actors, which leaves us with a 160-minute movie that’s ploddingly paced, visually and thematically overstuffed, underwhelmingly performed, and pretty hokey at that. Yet Benjamin Button has a number of small charms to recommend itself, including the scene with the sinking German battleship, which is expertly crafted. It’s also never boring—faint praise, but it’s an accomplishment for a film this long.

But that’s not enough, I’m afraid, to make a movie this portentous totally worthwhile. It was pure happenstance that l saw Max Ophuls’ newly restored Cinemascope masterpiece Lola Montes within 24 hours of watching Benjamin Button, and it made Fincher’s film seem positively quaint and sophomoric in comparison. Lola is another technically innovative biographical picaresque, but its particular innovations (Ophuls’ unbelievable tracking shots and glowing Technicolor scenery) are astounding, not distracting like Fincher’s video game period piece. They’re also in service of the film’s satirical and moral aims, whereas Benjamin doesn’t have either of those to begin with. Despite the marketers’ promise of some Kierkegaard-infused wisdom, Benjamin Button is a hollow epic, with nothing to teach us and little emotion with which to engage us. Pretty as it may be at times, Fincher’s periodically graceful framing of Pitt’s amber, ageless face never touches Ophuls’ sweeping, still-resonant vision.