We All Live in Possum Springs 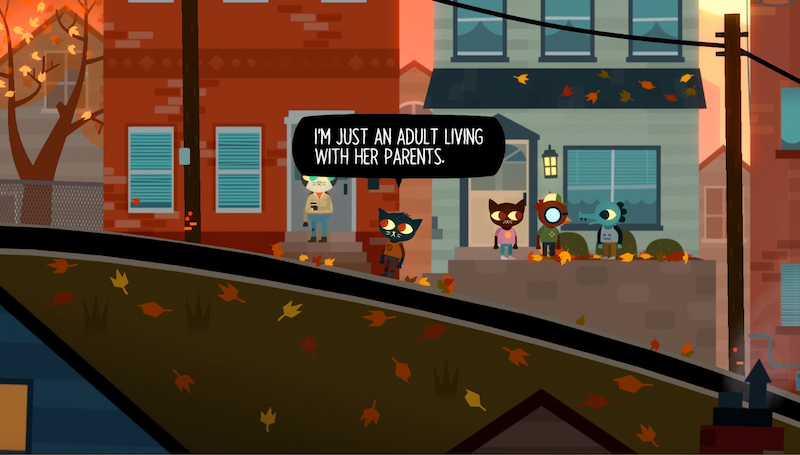 At first glance, Night in the Woods is a side-scrolling adventure game featuring a cast of anthropomorphic characters. Perhaps you'll instantly take to animator Scott Benson's expert usage of shape and color. But what makes Night in the Woods a powerful experience is that it understands the Millennial experience in a way that few forms of media are able to articulate. It's a game brimming with intellectual depth, dealing with issues such as mental health, depression, economic stagnation in lower and middle class America, and the fading of small town life in the United States.

This is evident when the protagonist, Mae Borowski, arrives back in her hometown of Possum Springs after dropping out of college. When she speaks to the janitor who’s fixing a door, he says that people are no longer visiting the town like they used to. It’s clear that Possum Springs, despite its vibrant aesthetic, is dying. The Fort Lucienne shopping mall has become a shell. Mae's best friend Bea responds to Mae's confusion at the state of the mall with a single word: “Internet.”

Night in the Woods is critical about the state of modern capitalism, with capable people stuck in unsatisfying jobs because they have no other options. Angus, the most intelligent character of the game, works at a movie rental store and is unable to use his intellectual talents for his community. Other characters face a similar wave of underemployment, living an alienated existence. A depressed Mae hovers about the game without much of a direction or purpose.

While the economic reality that affects Millennials is the theme, Night in the Woods captures other aspects of this generation through its gameplay. There’s frank discussion about sex, living with mental health issues, the dwindling of religious sentiments, and the monotony that permeates daily life. Mae and her friends often receive the most entertainment from youthful hijinks such as playing with Gregg's crossbow and smashing light bulbs with a baseball bat.

The antagonists are also worth noting. The game reveals that citizens of Possum Springs have been abducted by a cult that sacrifices them to a Lovecraftian being of cosmic horror known as the Black Goat. Their motives for this blood ritual emphasize returning to a better time, an idealized fantasy that the cultists desperately cling to. While they assert that they have no ill intentions, they don't stop to question their actions, or if Possum Springs is even worth saving.

Mae's confrontation with the unseen beast involves her embracing the pent-up rage and recognizing that the town's days are numbered. She realizes that she’ll have to move on, as will her friends. She goads the creature to kill her, but it cannot. It only manages to speak unintelligible gibberish, before leaving her mind.

Night in the Woods serves as an analogy for the struggles that Millennials face. From entering a rigged job market to the sacrifice of innocents for a golden age that never was, it summarizes the experience of growing up in the 21st century. It reveals an uncomfortable truth for Millennials: we all live in Possum Springs.