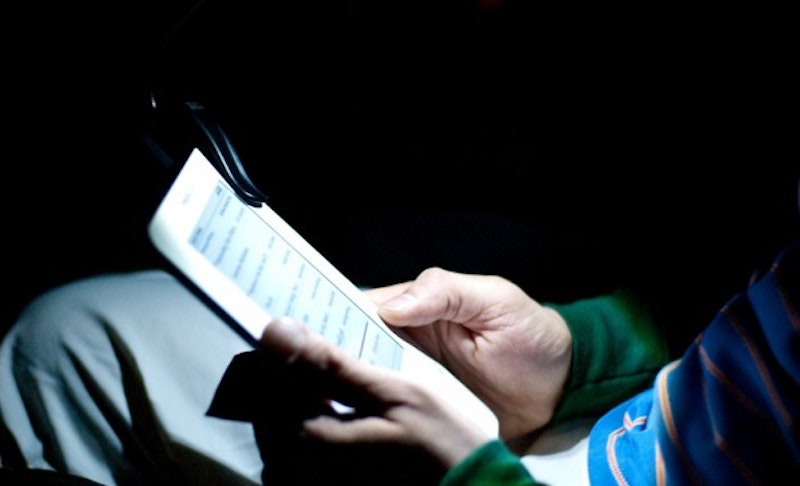 For writers, the promise of the Internet is a turbo-charged version of punk rock’s promise. Dispense with those corporate suits and uptight bean-counting gatekeepers; all you need is an Internet connection and a keyboard, and your words can be distributed instantaneously to more people than Shakespeare or Dickens ever imagined existed. You can tweet to eager followers; you can start your own blog to host your Cthulhu/50 Shades of Grey mash-up. You can even make your own e-book and distribute it through Amazon, where it’ll sit side-by-side, or byte-by-byte, on the digital shelf next to Shakespeare or 50 Shades of Grey or Cthulhu. Fame, fortune, relevance; you don't need to know how to play the chords, or copy edit.

That's the dream, anyway. The reality is a little less utopian. The Internet makes it easy to do it yourself. But by the exact same logic, the Internet makes it easy for everyone to do it themselves. You don't need any particular ambition or talent or know how to put your unique steampunk Game of Thrones fan fiction out there, but no one else does either. And if everyone is online together, why should anyone pay attention to you?

Over the last few months I've been experimenting with collecting some of my essays into little e-books and selling them on Amazon. I took essays I wrote for my political film series here at Splice Today, added a bunch more I wrote for Patreon subscribers, had my friend Vom Marlowe design a cover, and—ta dah! My own book, Corruption: American Political Films. There it sits on Amazon, just like I'm a real punk-rock author. I spit upon your staid, bourgeois business model, Random House.

I wouldn't say that the effort has been a complete failure. People occasionally buy the books. Some have even left comments saying, "Hey this could be better copy-edited," to which I say, yeah, man, that's why it's punk rock! Low production values—it's an artistic statement. Get with the program, daddy-o. Anarchy in the spell-checker.

When I started, I thought, well, maybe I can sell a couple of books a day. That seems like a modest goal… but it turned out to be wildly optimistic. I can maybe sell three or four books a week—if I constantly promote them on Twitter. For the most part, Corruption: American Political Films floats about at the bottom of the Amazon algorithm, as sad as that self-published paper novel blankly gathering dust in your drawer. It's only when I go stump about on social media and irritatingly demand that co-workers and passersby sign on to purchase the equivalent of Girl Scout cookies that I move units. Except, you know, people actually want Girl Scout cookies.

The do-it-yourself dream of a middle finger for every gatekeeper is also a do-it-yourself dream of constantly marketing your unnecessary product to everyone else all the time. Punk rock has turned into the all-encompassing neoliberal future, where we're all in business for ourselves, marketing our own ineffable genius in mundanely effable digital form. The fact that anybody can sell their crap means that everybody is selling their crap—and if you're selling your crap, why would you want to buy somebody else's crap?

The Internet allows everybody to be special—and if everyone's special, no one is. My little e-book is out there with yours, and yours, and yours. No one can take that away from any of us. As it turns out, no one much wants to.