The Best Eats on the Web

Nowadays, everyone's a gourmet. But a few online aficionados stand above the rest. 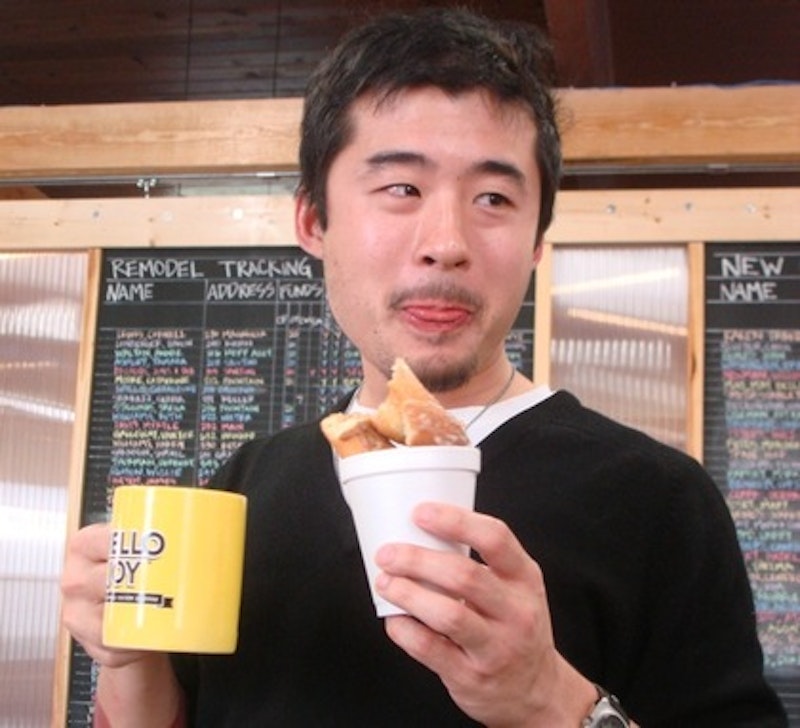 Clarified butter infused with Herbes de Provences, personal smokehouses, and some spare lemongrass always in the fridge just in case. This is the era we live in. Everyone is a gourmand and once-mystifying cooking procedures like wine reduction and roux thickeners have become so mainstream that people are deciding they’re too good for The Food Network.

Of course, the 24-hour cooking channel is one of the main reasons for the current home chef craze that’s sweeping the nation. People can watch the glitz and glamour of Jamie Oliver whip up a coq au vin and then head over to their neighborhood Whole Foods to buy the ingredients, maybe even splurge on a disc of Pélardon from Cévennes that would provide an excellent grace note at the end of the meal. The irony is that even though Americans, especially of my generation, are increasingly more interested in cooking, it has not stopped us from eating out on a regular basis. As Marcella Hazan notes in a recent op-ed piece in The New York Times, “The food Americans eat that is made fresh at home by someone who is close them is shrinking compared with food consumed at restaurants or prepared outside… 'Chef' has pretty much replaced gourmet cook for anyone who cooks well.” It’s a bizarre contradiction. Cooking’s celebrity appeal has made us more proficient in foodie talk but has nevertheless distanced us from its function of connecting families and friends in an everyday routine.

So if you too are concerned by the all-or-nothing glorification of the standard meal, here are a few digital resources to keep you grounded in the human aspect of cooking:

Maybe it’s some kind of Jewish paternal attraction, but watching Mark Bittman’s miniature-length cooking videos on The New York Times’ media page is strangely therapeutic. From his inadvertently loud voice to the delicate Klesmer-like strings that cap each segment, there’s just something oddly nostalgic about the whole affair. It hits all the right Jewish cultural buttons without leaving me feeling too um…Jewish. Bittman uses the term “minimalist” as a moniker and his recipes follow suit. Most consist of only a couple ingredients and he rarely pays too much attention to measurements. Occasionally his recipes are so scaled down that minimalist seems like a placeholder for laziness. I’m sure that Kasha Varnishkes is a real dish, but I nevertheless have a hard time believing that this specialty of grain, pasta and onions wasn’t just made up on the spot. In another episode, Bittman creates a vegetable soup with nothing more than salted water as the liquid base. It’s hardly a razzle-dazzle type recipe, but it goes to show that fresh ingredients can make anything tasty and satisfying.

It’s the casual demeanor that makes “The Minimalist” surprisingly engaging. When Bittman presents a meal, he does so with an indifference that seems to say “This is so easy, I don’t even know why I have to explain it to you.” Yet, he makes mistakes, he under-seasons, and even concedes that he would have added another spice but didn’t think of it before. These missteps make the show incredibly charming and play on its main theme: Instead of transforming everyday food into a gourmet product, he does the exact opposite. Hell, you don’t even need a real kitchen. Just look at his home set up.

Unlike the The Minimalist, Sandwich Duel indulges in the kind of snobbery usually associated with gourmet cooking. It’s exaggerated, irreverent, and probably the funniest food-related thing online. The origin of the Sandwich Duel is almost more hilarious than the “duel” itself. Last year, New Yorker writer Zachary Kanin interviewed cartoonist Chris Onstad, the creator of the tremendously funny online comic strip Achewood, shortly after it was named Time magazine’s graphic novel of the year. In the interview, he asked if Onstad would write some blog posts for him, seeing how balancing his writing with the rigors of operating a fictional sandwich shop in his apartment was leaving him rather swamped. Onstad liked the idea and eventually the two began alternating anecdotes of their competing sandwich shops (Onstad’s Up Zachs and Kanin’s Slammers Sandwich Hospital) starting a storyline that mirrors one of Achewood’s most popular threads in which two characters open up competing Subway restaurants.

In these blog posts, the two offer a healthy dose of sarcasm, bogus food lingo, and complete absurdity.

I have no idea who reads Gourmet magazine or what kind of reputation it carries in food circles these days. Anyway, that’s all beside the point. Francis Lam is one of the magazine’s best writers and has a pretty solid archive of his work online.

He is the type of writer who would eat at some snooty Manhattan restaurant if he had to, but would rather review some late night dumpling shack in the outskirts of the city. Lam’s articles are brief and anecdotal. Sure he talks about food but the stories often tend to be character-driven. My favorite article of his takes place in a Vietnamese restaurant named Noodle Pho, doubtlessly tucked away in some cluttered New York borough. Lam points out some initial peculiarities—a Korean prayer printed on the wall, and ramyun noodles given equal share next to the pho listing. Having his doubts about the authenticity of the pho, he opts for the cheese ramyun. At this point, Lam spends as much time talking about his “squiggly instant noodles and…disturbingly unmelted squares of pasteurized process cheese food product” as he does the owner of the restaurant.

The article concludes with an impressive emotional turn that illustrates the grim reality of the restaurant business. So often we read stories about success that we forget most restaurants fail miserably. Lam doesn’t shy away from this reality. Instead, it’s his focus on the people involved—the customers, the workers, the cooks—that give his writing such emotional depth.

The amount of food-related content on the web is staggering in quantity and diversity. Checking out these resources might not inspire you to cook any more than you do now, but at least it presents some perspective to what we normally interpret as food entertainment. In any case, it beats the hell out of watching Sandra Lee decorate a tablescape.