Lost in the Dwarf Fortress 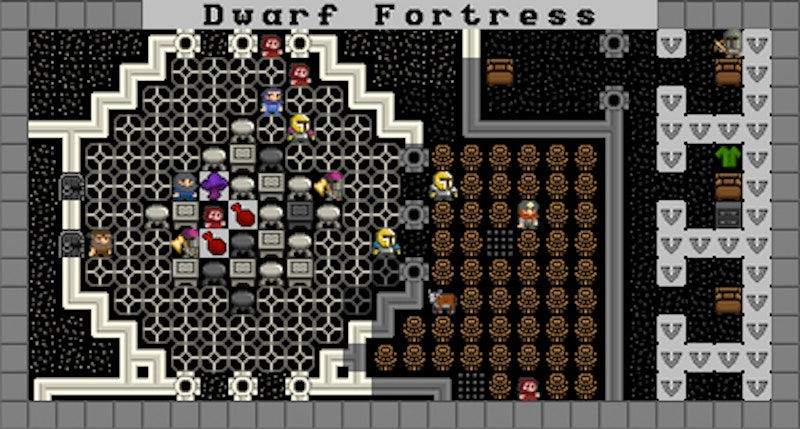 When I was a very small child my family owned an IBM PCjr. This was the early 80s, and other children were outside purchasing neon-colored pants, or inside watching television programs that they now feel nostalgic about. The PCjr took me to wonderful, faraway worlds through the magic of actual cartridges and the old-fashioned 5 1/2 inch floppies whose faintly acrid vinyl smell I encounter, only rarely, in my dreams. The most elaborate game for the PCjr was Donald Duck’s Playground, a crude and pixilated semi-educational game that, I realized much later, was a horrible overture for a life of meaningless toil. In Donald Duck’s Playground you took control of Donald, who worked a variety of menial jobs: catching fruit that flew from a conveyor belt, making change, or directing trains at a non-union switching board. Each task earned a pittance that Donald could spend at one of the town’s few stores—in my bitter late 20s I like to think that Donald’s willingness to work for well below minimum wage had driven all the other local businesses to close. The only remaining stores sold playground equipment that Huey, Dewey and Louie could use at a horrible, pixilated playground outside of town. Building this playground was the point of the game.

I played Donald Duck’s Playground frequently because its bright, occasionally blurry graphics gave me a vague idea of what was going on. The other games that came with the PCjr were not so kind. Temple of Apshai in particular remained in my memory—it was a typical 1980s role-playing game, in that it had been invented by engineers, was brutally difficult, and featured primitive graphics. A web search for Temple of Apshai reveals a fact that I had forgotten—the manual actually listed text descriptions for each room in the dungeon, and you were expected to look them up and read them as your virtual representative entered each screen. Temple of Apshai is a descendent of Rogue, an even more difficult game that I never played in my youth. Rogue was one of the first computer games to rely on ASCII graphics, that is, text and simple lines arranged to form a very simple map of a dungeon in which a capital R might represent a deranged orc or a pile of treasure. I only learned about Rogue this decade; it still enjoys a surprisingly strong following of hardcore nerds.

Perhaps because of this misspent youth I have always been fond of small video games, games that lack the polish and lavish budgets of their more popular brothers and instead rely on the pathological, life-destroying efforts of only one or two people. A famous and interesting example of these games is Dwarf Fortress, another descendent of Rogue that places the emphasis not on killing orcs but on building a needlessly complex economy so that you can manufacture high quality saw blades to deter grave robbers. Available for free through its author’s website, Dwarf Fortress is utterly weird and utterly absorbing, and really calls into question what video games are about; it is also ugly, runs very slowly on even ultra-modern computers, and its controls require memorization of hundreds of arbitrary keystrokes. The ASCII graphics are unintuitive and require memorization to understand—dwarves are various colored @s, goblins little gs, and so on. Fans of the game liken the crude graphics to seeing the Matrix.

The game places you in command of a party of dwarves who must establish a settlement on a desolate mountain; you must direct their delving into the rock, designing a functional settlement and establishing farming, metalworking etc. You have no direct control over the dwarves, you merely make recommendations and the dwarves decide what they will actually do. Sometimes this is agonizingly frustrating. It may be more fun to hear about Dwarf Fortress than to play it.

In fact that’s how my interest in Dwarf Fortress began. I somehow stumbled across a thread in the Something Awful forums in which a large group of citizens of the Internet were playing Dwarf Fortress as if they were a dynasty of kings, each taking a year to rule the fortress. The fortress was named Boatmurdered, and the forums posts discussing it did not sound like they were describing a video game. Boatmurdered is a legend in Dwarf Fortress’ online following, and if you can get past the in-your-face dorkiness of its authors you will get a good idea of the vagaries of the game and an entertaining story about the dangers of domesticated elephants.

Dwarf Fortress’ programmer, a math professor who calls himself Toady, endowed his creations with a surprising depth of neurotic pathos and malformed consumer desires. The dwarves of Dwarf Fortress almost invariably degenerate into blood and perversion worthy of a Cormac McCarthy novel. The dwarves have individual desires, likes and dislikes, memories and possessions. As a group they have a system of hereditary nobility, elected mayors and trade representatives, a military and a prison and justice system.

This sounds boring until you realize that all of these elements can come together in complex and hideous harmony. Take an example from Quakedvises, a fortress that I played last spring. A leading swordsdwarf got himself elected mayor by getting practically everyone in the dwarven army to vote for him. As mayor he immediately enacted some nonsensical edicts against the export of anything made of nickel or any earrings. The dwarven constabulary applied this retroactively to a large group of dwarves who had carried barrels of finished goods to a trade meet with some elves (elves, in my experience of Dwarf Fortress, are dippy for earrings). The sheriff chained these dwarves in a prison, where most of them starved to death because the dwarves tasked with feeding them were attending a party. The mayor then experienced a mania for doing crafts. He seized a workshop and demanded, predictably, tons of nickel and raw silk. The fortress lacked silk and eventually the mayor’s stymied creative impulses drove him mad and he flew into a berserk rage, smashing furniture and terrorizing his neighbors. The sheriff confronted him and, because the jails were full, was unable to put him in restraints; instead he cut the mayor’s leg off with an axe and the mayor promptly bled to death. Stonemasons throughout the fortress filled wall after wall with engravings commemorating this bloody end. Jane Austen it ain’t, but does it sound like a video game to you?

Watching all this unfold was the exciting reward for hours of tedium. If I had not been avoiding work on my dissertation by making improvements in the setup of the smelting complex in my fictional ASCII fortress I would never have seen the passion play of justice and retribution that my doughty dwarves acted out. Shortly after this I stopped playing Dwarf Fortress entirely, so I have no updates for you on the fortunes of Quakedvises—the game simply takes too much time and concentration to play for more than a few days. While I was playing my friends actually looked forward to news of the imaginary dwarves (some of them with some level of worry about the condition of my mind). This is the magic of Dwarf Fortress. Though it is ugly and without specific goals (the game ends when all the dwarves die, otherwise it continues forever) the game places its incredible complexity at the service of a bizarre, spontaneously generated plot.

Most modern video games, like the ubiquitous Halo, feature terrible plots written by their creators. Dwarf Fortress, which has no plot, places the player in partnership with the game. The stories it generates are not as Hollywood as the plots of bigger-budget games, nor do they have much in the way of literary merit (although that really depends on the teller), but they are interesting and often surprisingly poignant.

Video game journalists, most of whom make even me look like Bob Woodward, often lament the fact that society doesn’t consider video games a legitimate medium, like painting or film. Most likely this is because video games are not a legitimate medium for artistic expression, and as long as they are driven by the lucrative consumer desires of 18-25 year-old-males they never will be. Dwarf Fortress gives an excellent counterpoint to this pretentious and futile debate.