What Have You Been Up To?

Facebook and the future of awkwardly keeping in touch. 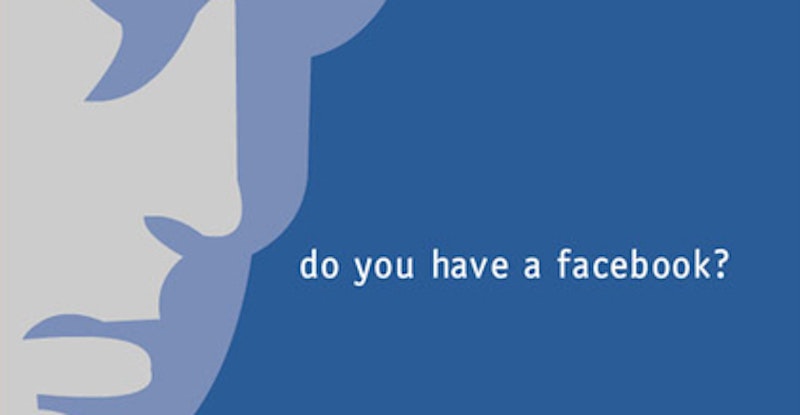 Social networking websites like Facebook were supposed to revolutionize our interconnectivity as a generation. Our generation has been the guinea pig for this wacky experiment. And now the first generation of widespread Facebook users is seeping out into the real world, with their interconnected Facebookityness holding them tight together.

Everyone has their “Oh <giggling>, I remember when I first heard of Facebook. I thought it was for ____ (stalkers/losers/emo kids/etc.)” story. Seriously, ask the next person you see what they remember about first using the social networking device, and everyone around you will break out into stories like an old man telling you how many miles he used to walk in the snow.

I was ready for this moment in personal and world history. Everyone I knew was jetting off into various cities across the globe. Our techno-savvy and decent social skills would bind us, a generation as one! We would know everything about everyone, step-by-step along their path to inevitable enviable success. But along the way to this utopian dream of togetherness, a question began creeping into our social lives: what defines being connected?

This is a newer question than it would initially seem. Certainly, we could discuss the semantics of “keeping in touch”—is it talking once a day, once a year, once a decade, etc.—but that’s a little different and definitely much more an age-old question. The real question, to be more specific, is this: does knowing someone’s story count as being connected?

A buddy of mine once told me that he used Facebook to keep track of his friends. I found this rather preposterous, and what I told him was “I never Facebook my friends. I only use it to keep tabs on my acquaintances.” At first I thought I may be an outlier in this regard, but I asked a few people about it, sneakily paid close attention to my friends’ habits while they Facebooked, and noticed a trend.

First, let us establish that there are two distinct uses of Facebook: instantaneous fact-finding and boredom-sapping persona-surfing. You’re either confirming the attractiveness—or hilarious unattractiveness—of that person your friend made out with last night or you’re just cruising around on your laptop instead of studying or working. The former is fairly random and probably skews slightly toward looking at strangers. What I saw in my brief, unscientific observations was rather intriguing.

People usually start with someone who has updated their profile recently, of course, and this person tends to be someone the Facebooker knew relatively well, though not likely to be one of their closest friends. They then went increasingly into staring at acquaintances, then moved on to flat-out strangers, and if they went along long enough, would eventually find their way to a close friend’s profile. If you’re unsure about this, do something drastic to your Facebook profile that would elicit an immediate response from all your acquaintances and see who replies first. I bet you the first responses will be pseudo-friends, followed by your Facebook-obsessed friends (but not your best friends), followed by your closest friends, and capped off by your loosest acquaintances that aren’t that into Facebook (who by now have gotten the news).

I then thought about my buddy who used Facebook to keep track of his closest friends. At the time, he was a bit of an outlier himself. He was transferring schools, and in the process, was taking a semester off and working from home. He was physically disconnected from virtually everyone we know at a time when everyone was busy with school, during most of our junior year.

Indeed, anecdotally, since graduation the acquaintance circle that I peruse on Facebook has gotten much wider, as my friend circle—those that I rarely Facebook—has gotten much smaller. Without a looming encounter—either a return home for break or a return back to school—keeping in touch takes on a more proactive feel. If I was busy before, I would have held off calling an old friend because I knew I would see him or her in a couple months, hence my buddy’s isolation during our college time. Now, I have no idea when I’ll see them next, so I better give them a call. In fact, when it comes to my closest friends, I only call them to check in, with the exception of my one friend living overseas, who gets instant messaged.

Herein lays the issue, though. These brief, often meaningless AIM conversations rarely provide any real information. Do they—like those endless e-mails filled with two-line brainteasers and clever links—count as keeping in touch? Facebook provides hundreds of people much more in-depth updates about someone’s status than those little conversations. Does simply reading a Facebook page count as keeping in touch? If you read this column, you probably know more about my personal life than many people whom I would consider my friend.

And this brings us to the revelation in the New Awkwardness brought on by New Media: The “OMG What Are You Doing These Days?” Phenomenon. If Facebook provides most people updates about your life, then those people are in turn left with the uncharted territory of whether or not they are supposed to get in touch with you to let you know that they’ve been anonymously following your life. When I moved away from Maryland, I was taken aback by the amount of people that got in touch with me after at least a few years of silence.

I am not sure what to make of this. I mean, on the one hand, I was touched by the gesture in a very specific way. Those people decided that in some way I was important enough for them to let me know that they were keeping track of me and thinking about me. At the very least, they were intrigued by my move and wanted to know the next chapter in my story or perhaps even the chapters they’ve missed. This requires a bit of social outwardness, and I appreciate someone taking the first step to get back in touch.

On the other hand, though, I have no idea how to respond. Those that received responses probably received generalized “Oh well, I’m here and uh, trying to figure out what I want to do” with varying level of detail. This is a completely new dilemma. It is impossible through the Internets to determine what level of detail someone wants or needs from your response. It may well be that some people were trying to legitimately establish a long-distance friendship again, and I misread it as polite curiosity because that’s the offbeat sort of cynicism the web revolution has instilled in me. Because when push comes to shove, the people closest know what’s going on with me in much greater detail than Facebook could ever provide.