The macabre social networking site MyDeathSpace now has its most appropriate subject: a suicide captured on webcam. 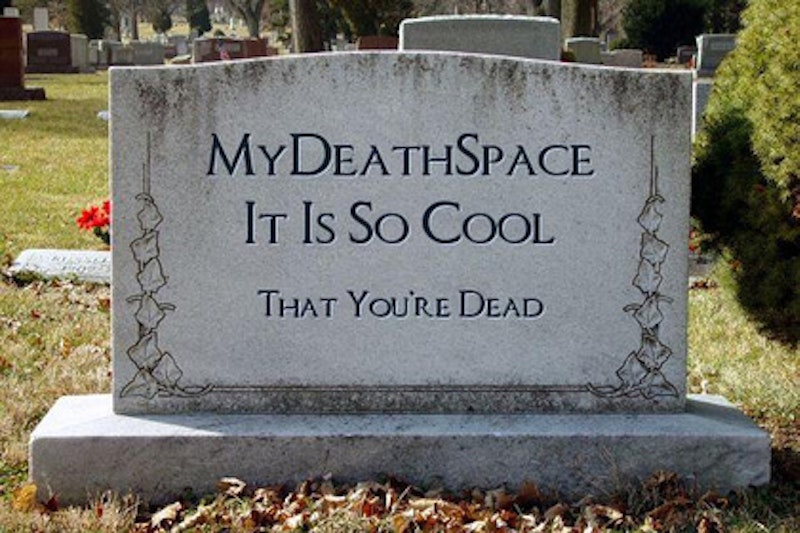 An earlier version of this article appeared on Splice Today on May 21. It has been updated in light of Abraham Biggs' recent webcam-assisted suicide.

Updates today: six car accidents, three suicides, two overdoses, five murders, and one illness. Okay, to be fair, one of those murders was an accidental shooting, but close enough, right? Anyway, this should be good; most of them were younger than me. This is always how I start my day: Take a shower, make some coffee, check my email, then read through my online news sources: MyDeathSpace is always first.

I admit it: I'm an addict. No, I haven't bought the t-shirt (yet), but I read MyDeathSpace the way businessmen read The Wall Street Journal. I'm not sure why exactly, but I'm not the only one. It has to be admitted, of course, that there is a particularly American fascination with death—or more so murder, I guess. It's not just Hollywood movies, it's not just CourtTV or Law & Order or City Confidential… I could go on and on. Murder is all over the news. Hell, it pretty much is the news. What was it Nathanael West said? "In America violence is idiomatic. Take this morning's newspaper: FATHER CUTS SON'S THROAT IN BASEBALL ARGUMENT. To make the front page he should have killed three sons with a baseball bat instead of a knife." He was right. We love stories like that, because we can't account for them. Take an article that was on MyDeathSpace two or three days ago: "Morgan Leppert (15) and Toby Lowry (22) beat, stabbed, and suffocated a disabled man to death." Now, I'd bet that you just said two things: "Oh my God!" and then, "I've gotta read that." That's what everyone says. And when you have read it, well, there's nothing to say. You just go about your day.

But MyDeathSpace doesn't just give you the news article; it links you to the MySpace profile. And really I can't explain why I'll spend 10 minutes looking at photos and reading the About Me of someone I've never met and (now) never will. Maybe because I've never known anyone who's died (except for grandparents, and that doesn't really count, now does it), and to see so many 18-, 19-, 20-year-olds dead, it sure makes me think which of my friends will die first. Ah, it'll probably be me; can't get away with two packs a day of Winstons for very long. (It's okay though, my friend Jen and I have a pact: If I die first, she has to post me, and vice-versa.) Not to mention, it's fascinating how much information we make public, available to anyone with a MySpace or Facebook page or a LiveJournal. Ten years ago we couldn't do that. Now it's as if we want everyone to know everything about us: what our favorite music is, what books we're reading, what we did today. And, okay, I'll be honest, when I die I hope someone I don't know laughs at those photos of me in drag (God, was I drunk). But really, probably no one will even look. It seems like the more information we make public, the less anyone cares. This morning, I read the MySpace blog of a 19-year-old girl who hung herself about a month ago. Half of the posts were about how damn lonely and confused she always felt. But from what her friends wrote I don't think any of them saw it coming. Really? Because I got it pretty fast.

All of this came to a head about two weeks ago, when our generation's obsession with making everything about ourselves public turned into the world's first web-broadcast suicide. Abraham Biggs, a 19-year-old from Florida, posted a suicide note on the forums of a bodybuilding site he frequented. Then, logged into a live webcam site, Justin.tv, Biggs overdosed on pills as others watched—and egged him on. As one of the moderators of the bodybuilding site said, if you had the thread in front of you it would basically read as 40 pages of "Do it faggot." It wasn't until hours later, when comments turned to "He's not moving" and "He's not breathing," that someone contacted the site to get address information. Even as police entered the room, guns drawn, some still thought the whole thing was a prank. Justin.tv CEO Michael Seibel had no comment on the video, but he did note the site's policy on removing "objectionable" content.

Objectionable? If this catches on, I wonder if we'll still think of it like that. Because when you put your whole goddamn life out there on Facebook and MySpace and all the rest of it—including Justin.tv, and the whole Lifecasting craze—what's so objectionable about webcam suicide? That seems like where this was headed all along, right? In fact, could be a whole new business in this. Authorize a company to photograph your death and then post the pictures all over your Facebook and MySpace. You know, you flip your car on the interstate, they're right there with the first responders, just in case you don't make it. Your friends will want to see. Oh, and of course, here’s Biggs on MyDeathSpace.

Now if you read MyDeathSpace for more than three or four days, you'll start to skim past all the car accidents (by far the most frequent cause of death). In fact, I've been reading MyDeathSpace for about a year now and I've decided that 15-to-25-year-olds shouldn't even be driving cars, or riding in cars—shit, they shouldn't be anywhere near roads.

And then there're the drugs. Christ, after reading this I don't even want to smoke pot anymore. Then again, what a way to go. Dignified? Well, no. But definitely crazy. I've already IMed that link five times. I mean, I've read MyDeathSpace for so long now that if it's not something like "Died after shooting up a bag of heroin in a KFC restroom," well, then I just don't care. Like Leslie Nielsen said: "A parachute not opening, that's a way to die. Getting caught in the gears of a combine; having your nuts bit off by a Laplander, that's the way I wanna go." Yeah, that's right, I just quoted The Naked Gun.

Lately I've even been Googling things like "teen accident killed" just so I could find someone who hasn't been posted yet. It's kind of a hobby. Some collect stamps, some play mahjong. I find submissions for MyDeathSpace. The process is pretty simple:

Do a MySpace search for the name. If there's a matching profile, then submit it on MyDeathSpace (search the archives first). Come on, you know it sounds fun. Give it a try.