No, selfies aren't the 11th Plague of Egypt. 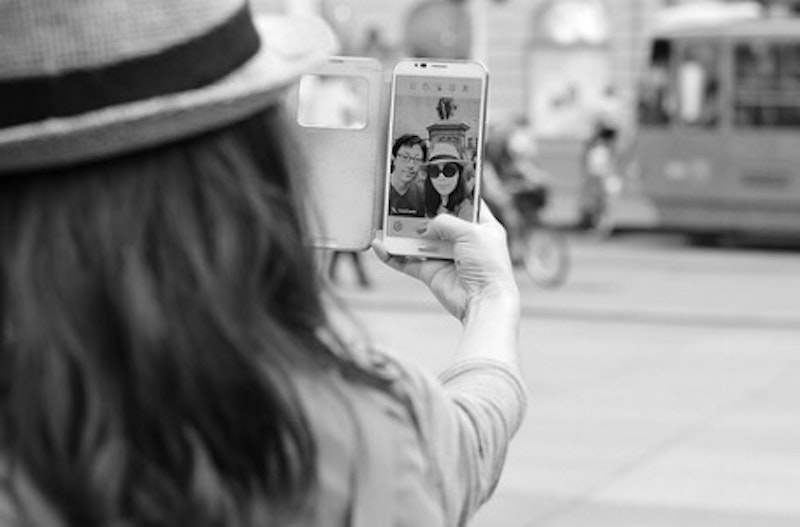 Like most smartphones in this Star Trek future we inhabit, mine has two cameras: a high-quality, forward-facing one, and another that points back at me. With it, I can plan and execute pictures of myself with the perfect angles, light balance, and composition to make myself look straight up gorgeous. Which I do. Frequently.

It wasn't always like this. Years ago, in the Dark Times of flip phones and my body's unrelenting march into masculinity, I hated the way I looked in photographs. Looking in the mirror, I wasn't generally enthusiastic about the kid who looked back, but I could live with him. But when he lurked in a picture on someone else's Facebook page, I cringed.

So when selfies started proliferating, I was a little perplexed. I knew other people had more confidence in their appearance than I did, greater self-assurance—but did they really feel so good that they felt the desire to celebrate? How odd. I chalked up the phenomenon to narcissism and my jealousy to teenage low self-esteem, plus the fact that my parents would only spring for a flip phone. (Bogus.)

Now that I'm transitioning and the boy I once assumed was me is gone for good (and I have access to cooler tech), I find myself compelled to take selfies—not because they're a stereotypically girly thing to do, but because I want to preserve a given outfit or skillful application of eyeliner for posterity. Really, though, it's about replacing my old body negativity (which is still present, but I properly recognize it now as dysphoria) with self-love.

I'm not alone. Transgender Facebook groups dedicated to building community though selfie-sharing are ubiquitous now; I belong to one such group dedicated to assigned-male trans folks, which boasts 530 members, all throwing out selfies and chatting about hormones, family issues, and general gripes about cisnormative society. It's a virtual community that may not always be positive—we've had to confront subtle and overt racism several times in the recent past—but is constantly productive.

But if you ask my elders, selfies might as well be the 11th Plague of Egypt. Allow me to be the one-millionth columnist to cite Joel Stein's infamous Time editorial, in which he snidely claims that Millennials are “so comfortable in front of the camera that the average American 1-year-old has more images of himself than a 17th century French king.” Writing for Jezebel, Erin Gloria Ryan took a vicious stance against selfies: “They're a high tech reflection of the fucked up way society teaches women that their most important quality is their physical attractiveness.” A couple of years back, when these editorials were popular, came studies that claimed Millennials were statistically the most narcissistic generation ever (enough to found an entire Psychology Today vertical on the subject). We're going to ruin everything! With cameras!

More recently, though, came nuance—which proves that, if you're getting your news on cultural trends from Time, you're either way behind the curve or so far ahead of it that you've run out of bounds and have been disqualified. Dr. Gwendolyn Seidman wrote last year in the wake of additional selfie studies that selfies could be “a way to connect with others, especially those taken with groups” and that “there is still a lot more to learn about who posts selfies and why.” No fooling?

You don't have to believe doctors or researchers, though. Just listen to a trans girl on the Internet who yells at you about gender politics every week: selfies kick ass. They let me find aspects of my body that I like instead of hate, trade ever-evolving style tips and tricks with friends in far-off places, and build friendships and partnerships that otherwise wouldn't exist. Through my selfie habit, I'm reclaiming my relationship with my body, and watching my vulnerable friends do the same. And I look good doing it.