All Set to Catch 'Em All

Pokemon Go gives me a reason to go outside. 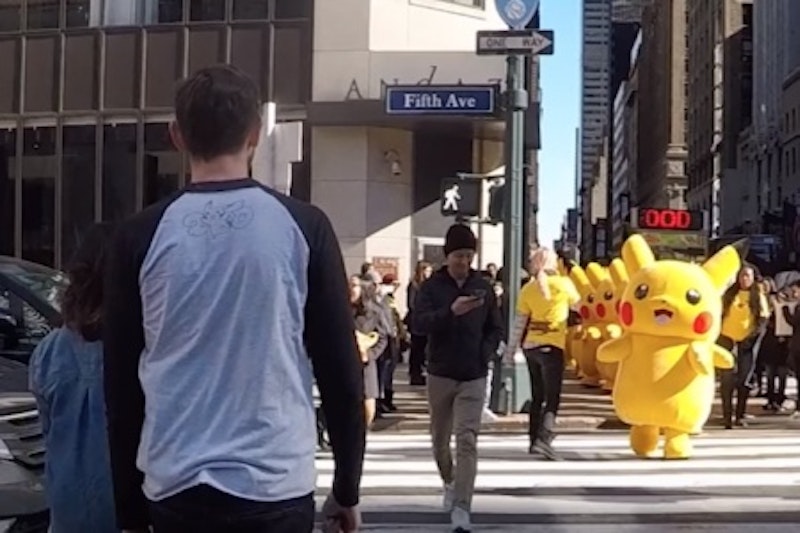 Always a hipster, I’m a Pokemon Go early adopter. I didn't get into the beta test, but when the game went live in Australia and New Zealand on Wednesday, I was among the first to jump on the newest bandwagon and download the leaked APK file. I didn't particularly care if Nintendo was irritated with me; catching Pokemon in meatspace has been my dream since I was eight, and nothing was going to stop me from being the very best like not even Ash Ketchum ever was.

If you've ever played the “augmented reality” smartphone game Ingress, Pokemon Go is a lot like that (unsurprising, since they're developed by the same company, Niantic). Players adopt a character persona, join a team of other nerds, and collect virtual critters with the aim of claiming territory for their team and completing their collections. It's good old-fashioned capitalist fun.

Of course, I've began at what I perceive to be a disadvantage; when I saw all three original starting Pokemon, I panicked and selected Bulbasaur, rather than Charmander, my ultimate bro since I first played Pokemon Blue. But even that’s a good thing, in a way; now I'll be motivated to look out for one in the wild.

That's the point, after all: to go outside. Pokemon Go only works if you go places. Nintendo and The Pokemon Company have experimented with this sort of thing before, when they released pedometers in the shape of Pokeballs (“Pokewalkers”) that would give your Pokemon some experience every time you took a step. Video games are traditionally sedentary, and this is a nice way to switch up people's expectations. Players wander outside in search of new Pokemon, gyms to challenge, and landmarks that contain item caches, making it a fun way to explore parts of your neighborhood in a new light.

And having a reason to go outside can be important. I freelance for a living, so I don't often need to go into an office; as a result, I often realize I haven't seen the sun all day just before it starts to set. It's not good to get cooped up to that degree, even by accident—and sometimes, it's not by accident. Since this is your weekly dose of “everything is trans forever,” here's a sobering dose of reality: for trans folks, going outside means we'll probably have to talk or interact with cis people, and that all too frequently ends poorly. Just this week, a dear friend caught a group of cis women making monkey sounds and crude gestures at her as she walked past their cafe table. You can bet that subjecting myself to that sort of nonsense is a lot more palatable when you offer me the chance to catch a wild Clefairy in the process.

You might think I'm exaggerating, but it's true. So I'm all set to catch ‘em all; I've got my trusty Bulbasaur (who is, really, a cool dude), my first egg warming in an incubator with every step (although apparently my bus rides don't count), and my will to interact with other humans has been restored. Hell, maybe I'll even go on a run tomorrow. Or not. I mean, even in the age of augmented reality, some things are a little too Farfetch’d.