All Hail Blanche, the Trans Queen of Ice

Team Mystic adopts the colors of the trans flag. 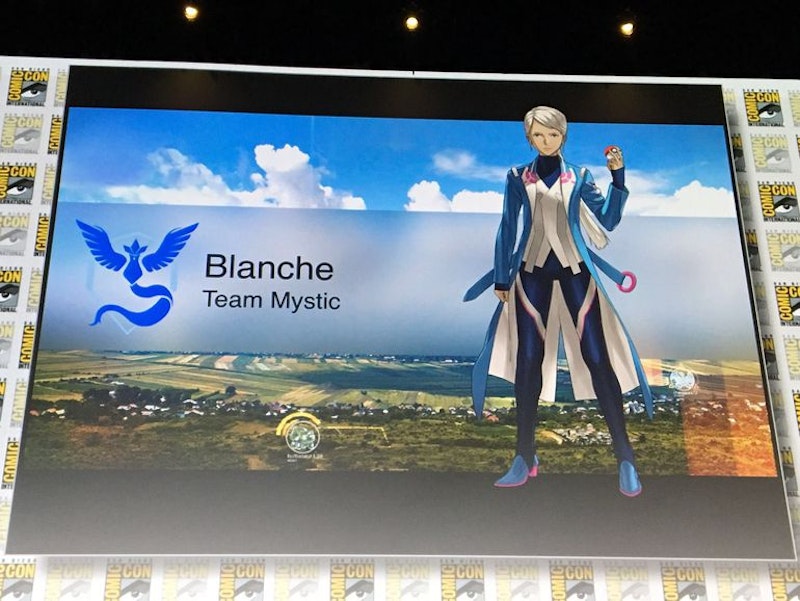 The week after San Diego Comic-Con is always a time for the geek community to sit back, reeling at the sheer amount of information that’s been dumped into their ears via cement mixers full of nerd culture. Most of the time we’re fixated on the worst news of the weekend, which this year was the unsettling revelation that Batgirl would get some Bat-dick (Bat-ick) from Batman in the upcoming animated adaptation of The Killing Joke. But our minds inevitably drift back to what is best in life; Conan might think that slaying, driving, and lamentations take that prize, but transgender Pokémon fanatics know the real score.

Niantic’s Pokémon Go panel ended by revealing character art for the leaders of the game’s teams—Valor, Mystic, and Instinct—and players went nuts. Up until this point, we’d only seen shadowy silhouettes after reaching level five and picking our teams, so seeing our “bosses’” faces felt like a huge deal. And though I’m certain Valor and Instinct players were pleased with their results (a badass-looking woman of color and Hufflepuff personified, respectively), nothing could have prepared me to see the icy, powerful Blanche staring back at me, her implacable gaze framed by a brilliant pink, blue, and white outfit.

These colors, of course, are also the colors on the trans flag. While some have written legitimate critiques of the flag’s flaws, I still instinctively latch onto it and its color scheme as a rallying point. Under that flag, I’ve found some of my best friends; every time I see it fly, flapping out in joyous rebellion against cisnormativity, my spirits lift. And it’s not just the flag itself, it’s the color scheme. Whenever I see blue, pink, and white in the same place, I associate the bearer of those colors with transness. It’s akin to the way my friends and I snicker every time we see a bus that says “Family Trans” on the side.

So when I saw Blanche in all her transy glory there on my computer screen, I was overjoyed. “So she’s trans, right?” I said to my friends, only to discover that the Internet was predictably way ahead of me and had already agreed that she’s a nonbinary goddess (I’m holding on to her femme identity, for reasons I’ll get into in a second) who’s in a romantic relationship with Team Valor leader Candela. I gleefully accepted and prepared myself for the deluge of fanart and headcanons I was about to receive. I was not disappointed.

Blanche is important to me in the same way Samus from Metroid is: she’s powerful in ways I want to be too, she’s in a cool video game, and there’s just enough information available for me to look at her and say, “Yep, that’s a trans girl like me.” All it took with Samus was the knowledge that she was hella tall and that one of her creators made a gender-bending joke about her once; is it any wonder I’ve latched onto this identity for Blanche? There aren’t many canonically trans characters in gaming, and hardly any in the mainstream section of the industry. I’ve written before about how woefully rare it is to find any sort of positive, uplifting trans story. When opportunities like this come along, when I can overlay my own life experience with a franchise that’s brought me countless hours of enjoyment since elementary school, that’s invaluable. Every time I conquer a gym in Pokémon Go, I feel like I’m propelling trans rights forward an iota. (I’m not, obviously, but the boost of self-worth I get is immensely necessary sometimes.)

Pokémon is a series that’s been part of my life since I was in grade school; I remember staying up far later than I was supposed to, straining out every smidgen of battery power I could get from my Game Boy, beating the Elite Four with just my overpowered Charizard. Pokémon was with me when I first started dating the girl I’d spend five wonderful years with, and we played Black & White Version all weekend. When I began to realize that I was trans during the tail end of our relationship, HeartGold Version let me play as a girl and quietly revel in the thought of existing as one. Now I can venture outside and claim real-world landmarks in the name of my Trans Queen of Ice, and when I do that, I don’t have to think about how scary it actually is to walk around while visibly trans. My inner power is enough.

Plus, insisting that characters are really trans is a surefire way to piss off gamerbros, and after Pokémon, that’s definitely my favorite hobby.