A lifetime of Doom and Wolfenstein. 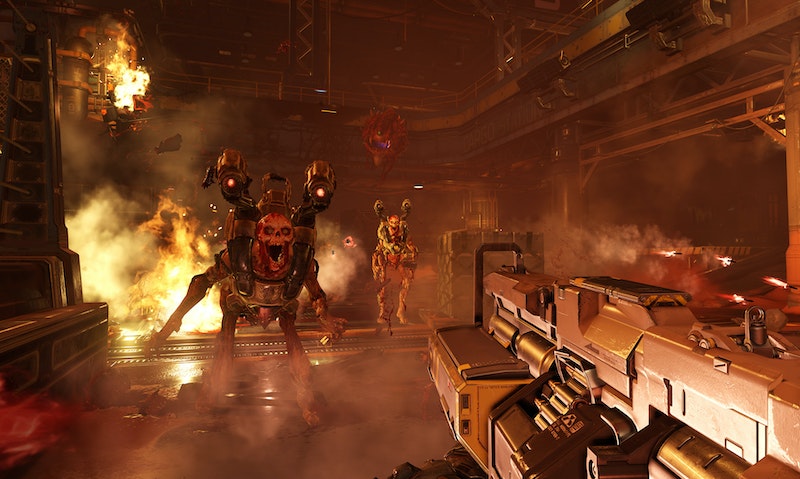 In 1992, a small software company called Id Software out of Richardson, Texas, changed the video gaming world as we knew it. First, it was Castle Wolfenstein. Wolfenstein was the first 3-D game to run on IBM computers, and it was also the first “First Person Shooter” (FPS).

What was great about Wolfenstein was its simplicity. You viewed the game through the character’s eyes, and you killed Nazis. Plenty of them. Nazis here, Nazis there, fucking Nazis everywhere. And for this Jew, it provided a rush I never knew existed. It made me realize that although my mom and stepfather had sent me through conscientious objector status classes at Riverside Church every week for an entire summer, I was anything but.

Back in 1980, the year I was to turn 18, President Carter decided to start the draft again. Although there was no war happening, and there had been several years of peace, POTUS wanted to be ready. At 17, I was scared shitless. I’d have to go through boot-camp and get yelled at all day by guys like my father, only with worse breath, and I’d have to sleep in the same room with a bunch of other guys who’d see me change into my uniform.

This may seem like no big deal to you, but for me, it was devastating. I’d just reached puberty when Carter made the announcement that upon our 18th birthdays, we’d have to march down to the post office and wait in a very long line, with the slowest and dumbest people on earth helping one person at a time before going on 15-minute breaks to the bathroom, or to find packages. Later, a friend of mine who was lucky enough to break into “that business” told me all he did was smoke pot all day in the back office, and the postal workers actually had contests of who could be the slowest.

Anyway, after a couple of hours, the postal clerk would hand you a five inch by seven inch filing card with information for you to fill out. Name, address, place of birth, mother’s maiden name, birthday, and everything else. From all my schooling at The Riverside Church, I knew I could write anything on that card and they’d have to accept it. It was the law. Of course most postal clerks didn’t believe this and some even went, well, wait for it, postal!

On my card, I filled out all the bullshit information they wanted and wrote "CONSCIENTIOUS OBJECTOR" in huge red letters with a sharpie. Other friends of mine wrote that plus other stuff like, “Fuck You”, “Uncle Sam Takes It Up The Ass,” and my favorite, “I like Disneyland.” My friend, Donald, wrote that one. He wasn’t a very quick sort of fellow and they probably never would’ve have drafted him anyway. Besides, it seemed he liked Disneyland better. Actually, if they’d given him a set of Mickey Mouse ears and a promise that he was in the club, I’m sure he would have been more than happy to run into battle with a machine gun only to be shot dead in one second.

Anyway, getting back to changing uniforms, I was really proud of my three pubic hairs and the fact that maybe within a year or two, I’d be able to shave like other real men. And then there was the bathroom thing. The toilets are right next to one another, all lined up, so everyone can shit in unison. I’m pee shy enough as it is. But pooping? Out of the question. I had enough trauma in elementary school and junior high school with that, thank you very much. So that’s what really motivated me to write “CONSCIENTIOUS OBJECTOR” on that file card.

I’d seen pictures of army latrines. Actually, from some army sergeant guy who tried to recruit me my senior year of high school at my father’s request. He showed me all sorts of neat photos of what army life was like. When I asked him why it was only me he was trying to recruit, he told me that my father requested it, and that he’d told him that it was the only way I’d ever make something of myself. He also told the guy to make sure I was in an infantry company that was known to have high causality rates. Then I’d be a tax-write off. So, yes, I registered and was later telephoned by some interviewer who asked me a bunch of questions about killing. They wanted to know if I would ever kill anyone. Like the church told me to say, I told them “Never, not under any circumstances. I believe all life is precious.”

Fast forward to 1992, playing Castle Wolfenstein and killing Nazis by the dozens and loving it. I used the word “fuck” more times playing that game than anywhere else ever. I was cursing out those Nazi fucks, calling them “Mother-fucking cock-sucking asshole-licking dog-shit eating fucking fuck goat fuckers from fucking Uranus and not mine.” Of course my mom eventually interrupted my gameplay to remind me I didn’t like killing.

“Of course, mom,” I said, “it’s just I hate those mother-fucking cock-sucking asshole-licking dog-shit eating fucking fuck goat fuckers from fucking Uranus and not mine.”

“Thank you honey,” my mom sweetly said, “you know I love you my sweet little fucking Nazi-killing machine.”

The following year, the first version of Doom came out. Also a FPS, also made by Id software. Only in this game, it wasn’t Nazis. You were on Mars and some jerk-off scientist opened a rift into hell to export energy to fill the world’s needs. Makes sense to me. The demons you shot at came in all different forms. There were imps, fast little brown fellows who threw mean fireballs at your face. Then there were the Lost Souls. Flying flaming demon skulls that were fast as hell. And plain old demons with pink skin, hooves, big horns, who could kill you with one huge ball of flame. Others include the Cyber Demon, who like the above demon, can also shoot missiles out of his arms and Spectres, also large and pink, when they weren’t invisible.

But my favorite friends in hell are Cacodemons and the Shotgun Guys. Shotgun Guys. Got to love that really deep and intricate name. Anyway, these guys are what their name says. Soldiers with Shotguns in Hell. They are the most fun to kill because they make that “urrgh” sound the Nazis did. So, in reality, I was killing dead demon Nazi zombies. Well, in my reality, anyway.

So now it’s 2016, and they’ve re-booted the franchise, after a bunch of sequels, my favorites being Final Doom and Doom 3, which had big fat bald zombies that when hit with your trusty shotgun sent their intestines everywhere, including your face. This new Doom looks sort of familiar to the first one in that it takes place on Mars and in Hell, but that’s about it. With graphics getting exponentially better over the last 23 years, this shit looks real! The demons are almost the same, only there are more of them. Even those fast brown little imp fucks that toss fireballs at you from everywhere. These little bastards can even hang from the ceiling. But it’s the big guys you have to worry about. They’ll drain your health faster than a Jamaican nurse with a catheter. And there aren’t very many re-energizing packs around. So, you’ve got to move fast and prepare to chainsaw some Hell Knights, Barons of Hell, or Mancubus when they’re flashing orange or blue (depending on how weak they are) to make them give up that extra health that’ll keep you in the game. The more you saw through their bones with that gasoline-powered bad boy, the more blood, guts and health packs come your way.

And if you’re low on ammo, and there are no cases laying around, time to chase those little brown fuck-face imps around if you can catch them, and give them the old in-out with the chainsaw to get much needed bullets, plasma packs, missiles, rockets, and the green stuff that powers your BFG (Big Fucking Gun) in every version of Doom since the start.

This game is tough, it’s been three months since I started it, and I still haven’t killed the final bosses. But I’m loving every second of it. On the PlayStation4, the game looks incredible. Just about beyond belief.