What do you do when your supporters can't talk good or know stuff? 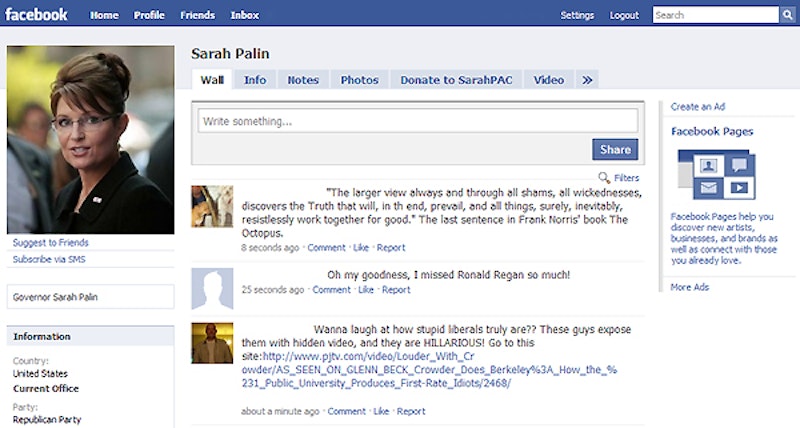 No, I’m here to reveal the most deliciously ironic statement ever written on the community page of a politician who is not exactly noted for her intelligence or use of sentence structure, or coherence, or words that actually exist.

“M. E. Reynolds: Sarah, I have readed both of your books.”

This is where I insert a very slow clap and an enormous, self-satisfied grin.

I’ve written before about the fact that we are not, collectively, intelligent or responsible enough to handle Government 2.0, and that Government 2.0 doesn’t really understand social media enough to grasp what they’re really doing just yet. I’ve previously placed most of the blame for this failure on the paint-chip eating population—but the responsibility of both parties has never been more obvious than this week. Even if Palin’s disgusting crosshairs are not responsible for actual deaths in Tucson (and I’m absolutely not saying they are), people are now infinitely more aware of both the power of imagery and the power of social media. May we all use them a little more wisely. If anything is going to come out of this terrible event, let it be awareness that our actions have consequences. It’s disappointing that we need such a reminder.

“K. Otieno: Well it's very obvious that the god of this world, satan aka the prince of the air and the one who actually controls the 'airwaves' hates Sarah Palin with a passion. His minions are in full attack mode as ridiculous as they can be.“

“D. Ritter: sarah Palin ,
maybe you know him and odonnal the tea party girl to transfer information for the girl thinks obama is behind her money scenerio and I think he is behind the terrorist acts on keeping his stealing from Bush with the help of th ...drugtheft tonya roberts alias pittman in summit towers aunt margaret and henry the monitor who passed out the keyUsslater did a movie 17th thru the 29th of aug2009 cont.”

I’m not even completely sure what that batshit insane ramble means, but it matches most of the Tea Party’s modus operandi: use lots of incongruous words under the beautiful delusion that they’re actually intellectual discourse which is far beyond anyone who questions them. They knowingly nod at each other, completely convinced that words don’t mean nearly as much as the camaraderie of a shared ignorance. But I digress.

Palin’s Facebook wranglers have been studiously deleting anything which disparages or negatively references her actions, deleting posts rapidly, but not so fast that they can’t be captured, and one blogger did just that. When it comes to manipulating the media (which is one of Palin’s most recent self-centered accusations), this is a far greater offense than simply presenting an opinionated viewpoint. This is censorship of free speech, and the removal of inoffensive comments by the same public that she claims are the backbone of her beliefs. I completely understand the removal of a stray “fuck,” but to remove appropriate comments that you simply don’t agree with is tantamount to the sudden removal and denial of your incendiary imagery, which is pathetic. You can’t ret-con stupid.

Government 2.0 doesn’t understand that you can’t effectively delete anything anymore, and when it tries to, it just leaves a gross, greasy stain behind for everyone to scrutinize.