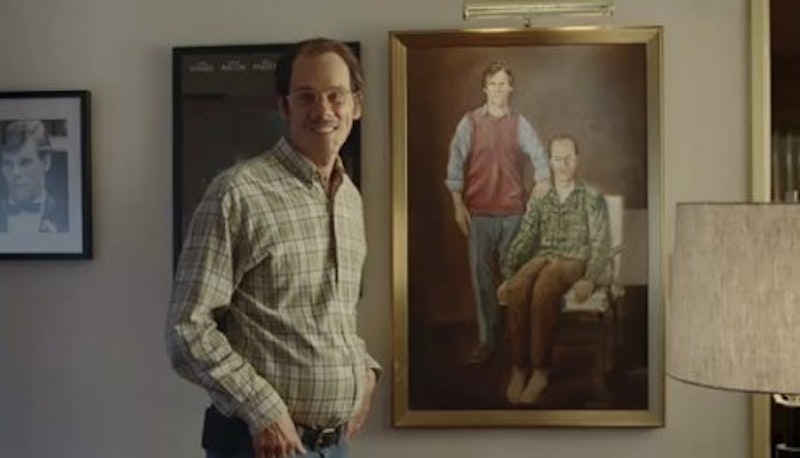 "My wife says if I watch any more Kevin Bacon, I might actually turn into Kevin Bacon," says Kevin Bacon, playing a fan obsessed with Kevin Bacon, in Logitech Revue's venture into the postmodern self-reflexive commercial. After saying the line, he crosses his fingers with a complicit smirk.

The allure, of course, is the inverse-narcissism—and, in my mind, rewarding humility—of Bacon mocking himself, by mocking a hypothetical fan who would be so absurdly obsessed with Bacon's rather tepid oeuvre. The set design of the fan's home includes an Apollo 13 movie poster, a hilarious Tremors "Graboid" sculpture in the front yard, a Footloose toothbrush glass, among many other meticulous set design details. My favorite is a commissioned oil painting of the fan seated next to Bacon, their faces rendered to look eerily both similar and different. (The actual painting was indeed commissioned by Logitech, or at least their ad agency.) The fan character has a pot belly, bad teeth, and what seems to be hair implants; this may seem a cruel caricature of the Midwestern American, but I think the real purpose of Bacon's artificial transformation is to implicate it as being as such.

An implicit underlining notion in Logitech's playful conceit, perhaps, is the longtime "Six Degrees of Kevin Bacon" joke, which asserts that all actors are connected to Bacon through the roles they played within six degrees. I can't help but think of the film Six Degrees of Separation starring Will Smith and test out the theory.

In the Logitech commercial, the Bacon devotee brings up on YouTube, via Google TV, "Episode 16: The Bacon Brothers—New Year's Day," an actual clip from his actual band, actually on YouTube, and I can't help but mention that we are actually watching this commercial on YouTube right now, and so in a way, we are experiencing an extension of the satire, in our world of fragmented mediums and relative contexts.

This is not just a commercial for Logitech Revue, but for Google, YouTube, Kevin Bacon, his band, and, well, the theory that maybe we are all connected. Like you, reading this. I wonder how many degrees apart we are. What's your name? Let me Google you.