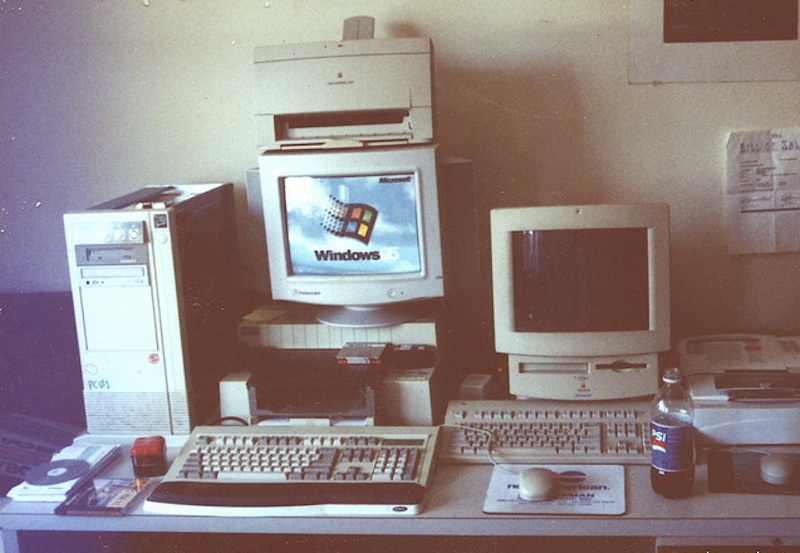 I stumbled onto the Internet back when everyone just called it “AOL” and Geocities was the only place that a teenager had to plant a website and watch it wither in cruel obscurity, populated as it was with found photos manipulated with freeware and seeded with bad poetry that borrowed heavily from Nirvana lyrics. I don’t remember what I’d uploaded to my first website back in the late 1990s, but I know that I was one of the first among my peers to really embrace the limited breadth of the world online: JPEGs that took 10 minutes to load, the magic of making MIDI files, and talking with anonymous weirdos from around the world while learning all about strange fetishes via accidentally-clicked-on chat rooms. Werewolf sex? Really?

I was so fascinated with the online world that I stayed home from a family vacation one year in order to explore it more deeply. I lived in a small upstate New York town that was sunken deep into a valley and didn’t appreciate the wonders of sidewalks, living far from the clear reach of any radio station aside from that one which was totally in love with Michael Bolton. It was like being suffocated, and every glimpse that I had of The World Outside made me hungry for more. My friends all turned to drugs and alcohol. I turned to the Internet.

At this point, I bitterly realized that my family wasn’t cool, and if they weren’t around, I could spelunk into the depths of the Internet without anyone picking up the phone and interrupting my trailblazing efforts. Using a stack of AOL disks and discs (which would arrive in the mail every week, first on 3.5” floppies, and later, on CDs), a borrowed emergency credit card, and embracing the limitless freedoms that being a teenager too young to work and wrapped within the throes of summer vacation carried, I sat down and learned how to use the Internet.

A week later, I’d barely moved from the computer. I remembered to eat, and I think that I remembered to sleep (albeit irregularly, because AOL got very interesting after dark), but the most prominent memory of this week is a deep pressure inside my head, and a feeling that my brain and eyes were developing scars as the hot, green veins of the Internet wrapped around my synapses and scorched them, consumed them. Once my family came home, I stumbled away feeling disgusted with myself, anxious to get back onto the Internet, because there might have been something I missed. In a week, I taught myself all about the pains of addiction, and I eventually intellectualized myself out of it, vowing to only use the Internet for good, and maybe the occasional boob.

What I created online during this time, the things I’d said and posted and commented and left my impression on, are still floating around out there, branded by whatever fruity pseudonym I might have been using at that time. These things are buried deeply, but because my brain still remembers and capitalizes on the same oft-tread paths that my teenaged self one traversed, I’ll stumble upon my old self every once in a while, and pray that no one of influence will ever find out just how much I really, really liked Tori Amos and Sandman comics. At least the old me had all of his hair.

But AOL was tricky back then, and it would occasionally re-route your dial-up connection to places outside of your calling area, so that week of sedentary obsession ended up costing around $110 in phone bills—still cheaper than the habits my peers were developing, which generally consisted of pot and abortions. Financial burdens and headaches aside, that week was revelatory, and its products rest at the bottom of everything else I’ve created, like a strata of archaeological junk waiting to be discovered, except we won’t learn anything about human ingenuity.

If you Google the word “Polaroid,” I’m the sixth image result now. I can’t help but see the fact that Google thinks that I’m almost synonymous with the word “Polaroid” as an accomplishment. I take the victories that I can get, even if they’re tinged with hipster.

The Internet doesn’t forget—at least not completely. Warner Bros.’ Space Jam website remains completely intact, and there’s evidence that someone has visited it relatively recently to maintain the grounds, redirecting old links to WB’s new home page and shop location, which are addresses that were certainly different back in 1996. Instructions regarding changing your Netscape browser’s icon into a spinning basketball (but only if you’re on a Mac!) are vital to mankind’s continued survival. At least this is a guarantee that someone will always have something far more embarrassing than me mixed into the detritus of the Internet.

People have purchased my lapsed domain names. AllNerdReview.com is now propagated with car insurance spam, and StudioRobotico.com, which was once very proud with wooden robots and free coloring books, lapsed when money was running thin and is now covered with spam about DVDs and CD recording. Even the most undesirable, specific domain names will be consumed by the voracious prospectors of the web in the hopes that someone will come back for their abandoned orphans and pay a handsome price for them, destroying any cache that your efforts built and filling them with empty, misleading junk.

Don’t create anything that you care about on the Internet, because it will die, and its reanimated corpse will shamble on, a weird husk of itself, adding to the congestion that will slowly destroy the utility of the Internet. When zombies try to sell you Viagra, it’s time to get out.